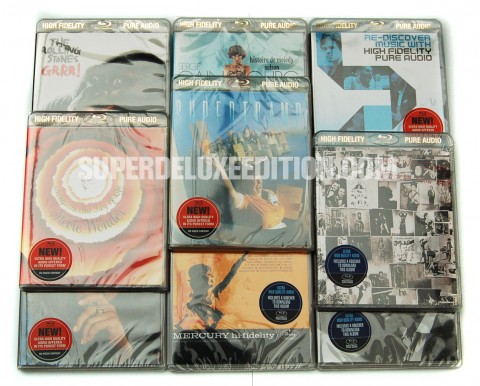 This competition is now CLOSED! Have you won? Click here to find out!

We have a superb prize bundle of NINE High Fidelity Pure Audio releases to give away to one SuperDeluxeEdition reader. These audio-only blu-ray discs are compatible with all blu-ray players and deliver a minimum of 24bit/96Khz hi-res audio.

The lucky winner will receive ALL the following titles:

Three runners-up will be send a demo disc.

This competition is open to all until 12 noon (UTC/GMT) on the 20th December 2013. To be in with a chance of winning this superb Pure Audio bundle, simply:

If you already subscribe to our newsletter, then just leave a comment. We will pick ONE winner who will receive the 9-disc bundle and the three runners-up who will each be sent the promotional-only 15-track demo disc. Winners will be picked at random on Friday 20th December 2013 and announced on this blog. Prizes will be sent out after Christmas. Good luck!