Enrol for our Christmas Advent Giveaway: 23 Prizes in 23 Days 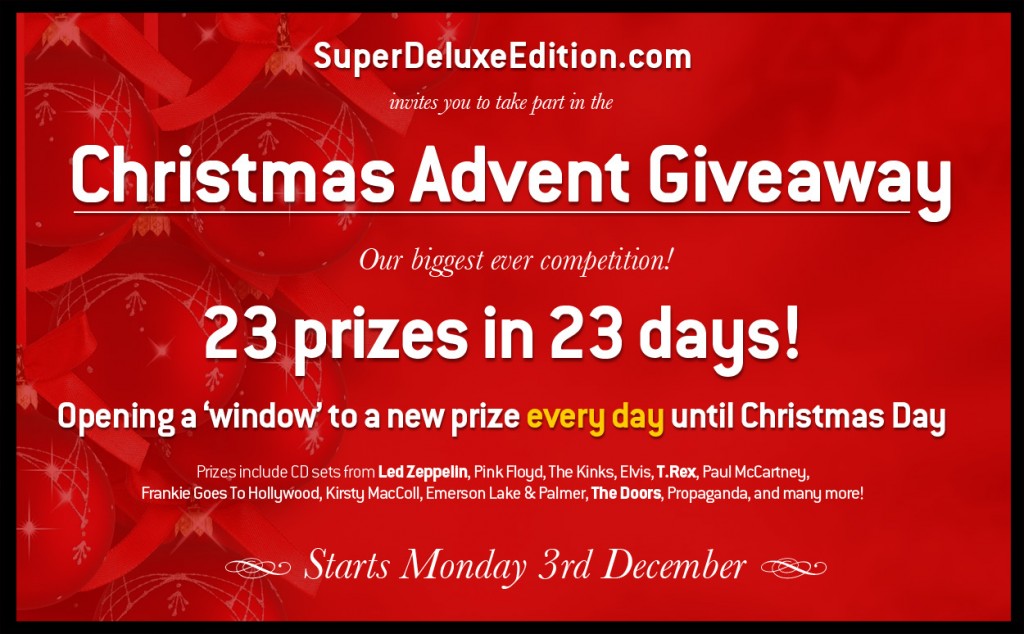 ***THIS COMPETITION IS NOW CLOSED***

No one can accuse this blog of being Scrooge-like as we head into the festive season. We’re entering into the Christmas spirit with our biggest ever competition – possibly the biggest music blog competition ever seen – with the SuperDeluxeEdition.com CHRISTMAS ADVENT GIVEAWAY.

Every day from tomorrow, 3 December, until Christmas Day, we will open our competition advent calendar ‘window’ at 8am GMT and reveal the prize for that day. 12 hours later at 8pm GMT a winner for that prize will be randomly selected from everyone who enrols to be part of this prize draw and announced on the blog. ENTRY IS FREE. To enrol and automatically be entered into all 23 prize draws simply do the following:

That is all there is too it! Each day the prize is randomly selected, as is the winner. The nature of this competition is that you don’t know what you’re going to win until you win it. Please enter into the spirit and no complaining – if you’re lucky enough to win something that you don’t like (or need). You have the option to inform us that you don’t want it, or why not just give it away to someone you know!

Regular readers of SuperDeluxeEdition will know that we cover a broad spectrum of artists and eras, and will also be aware that we give away GREAT prizes.

This competition is open to everyone with no restrictions. Good luck – it all starts tomorrow at 8am GMT!

***THIS COMPETITION IS NOW CLOSED***

Thanks to all our friends in the industry who have helped to make this competition a reality by supplying the prizes, including Sony, Warner Bros., EMI, Universal, Demon Music Group, Salvo Music, Cherry Red and various PR agencies. Our decision is final regarding the prize giving, and no alternative is offered. All prizes will be posted early in 2013.

1,413 responses to Enrol for our Christmas Advent Giveaway: 23 Prizes in 23 Days