19 Eighties / Into Battle: Searching for the Art Of Noise 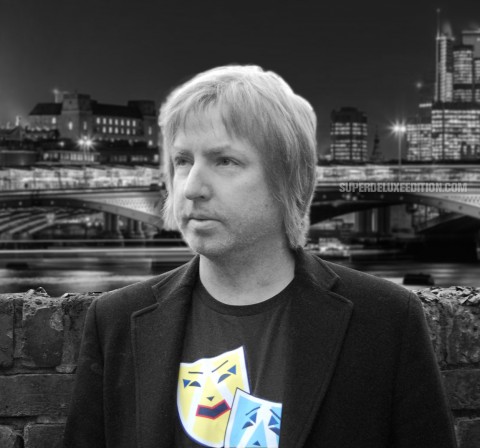 I was a child of the 1980s. Or rather a teenager. The Gods had decreed that those most impressionable of years would not overlap into any other decade and after many years buying and listening to music I duly turned 20 in December 1989 and became a ‘grown up’ just in time for the nineties.

It was the decade of the eighties that was celebrated last Saturday evening in London, at the Southbank Centre’s Queen Elizabeth Hall, with a performance by the BBC Concert Orchestra called 19 Eighties: The Rhythm Of A Decade. The centrepiece of this event was the world premiere of the Art Of Noise‘s 1983 debut release, Into Battle, ‘remixed’ for orchestra. AON’s very own Anne Dudley had created this in addition to another lengthy piece called Rhythm of a Decade. Founding Art of Noise member, Paul Morley, would host the evening and the strong connection with the ZTT record label continued with the inclusion of two pieces by composer and musician Andrew Poppy, who like the Art Of Noise, was signed to the Zang Tumb Tuum in the 1980s.

I’m a hardened rock/pop fan, so classic concerts are not my natural domain, but as a lifelong ZTT aficionado I knew I had to be there. Into Battle – remix for orchestra sounded amazing, With Paul Morley and Anne Dudley both in attendance that would be 40% of the original Art Of Noise straight off the bat. Perhaps producer Trevor Horn would make an appearance. Then it struck me – surely this is a perfect, perhaps unique, opportunity regress into pure fan-boy mode and get some autographs!

In general, I’m not one for autographs. As a music blogger who’s been lucky enough to interview quite a few musicians over the years, it rather gets in the way and puts up unnecessary barriers. Let’s sit down and have a serious discussion about your work, but first off all would you sign my T-shirt please…

But hey – always willing to make an exception. It occurred to me that getting the band’s collective scrawl on one item would be pretty amazing. That most anonymous of groups, made very real in pen and ink, 30 years on. I mean, how often do Trevor Horn, Anne Dudley, Paul Morley, J.J. Jeczalik, and Gary Langan actually get together? Have they even been in the same room together since 1985 when Dudley, Jeczalik and Langan walked out of ZTT (apparently with acrimony) and signed for China records taking the name Art Of Noise with them?

In the unlikely event that would find all five members, what would I get them to sign? After some consideration, I decided the most appropriate item was the Into Battle EP. This was after all, what was being performed for 19 Eighties. I own the original vinyl, the cassette single and the CD reissue from 2011. The CD was eliminated straight away (not exclusive enough), and although the twelve-inch single was tempting (lots of space on the front) I ruled it out largely due to laziness. Couldn’t be doing with carrying it around all evening. I had visions of leaving it at my feet at the interval as I knocked back a whisky and coke. It was settled then, cassette single was the object I’d take with me. A relatively rare and quirky item (I’m a proper fan, honest) and the ‘cassingle’ was synonymous with Zang Tuum Tumb. More importantly it was easy to carry in the inside of a coat pocket. 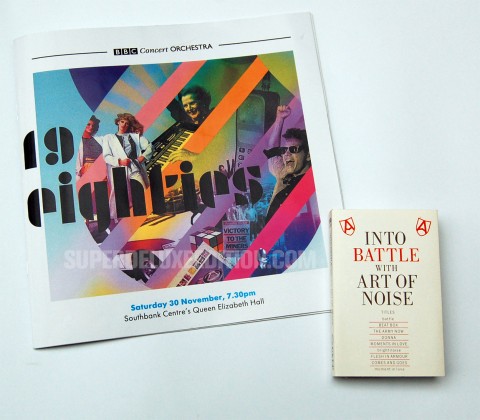 But I had one more trick up my sleeve. Like rock fans who wear the T-shirt from the-tour-before-this-one, when attending a gig, I would show my credentials by donning my Art Of Noise T-shirt. Officially licensed merchandise (of course), but ONLY available in Japan (via retailer Uniqlo) from quite a few years back (told you I was a fan-boy).  The T-shirt in question has the cover art from the 2006 4CD box set And What Have You Done With My Body, God? on the front, featuring those iconic masks. Actually, that’s not quite correct, the art work is an exact replica of the promo sampler CD that was produced, so the T-shirt actually has the text “Box Set Sampler. Promotional Use Only. Not For Resale” at the bottom. A bit strange.

Anyway, the plan had been hatched and last Saturday evening we took our seats. My wife and I were seated in row D, on the left hand side, right behind the piano and quite close to where Paul Morley stood when he came on to introduce the evening’s entertainment. Andrew Poppy‘s 32 Frames For Orchestra kicked things off and “Paul Music” as Morley inadvertently called himself at one point, disappeared behind a curtain. 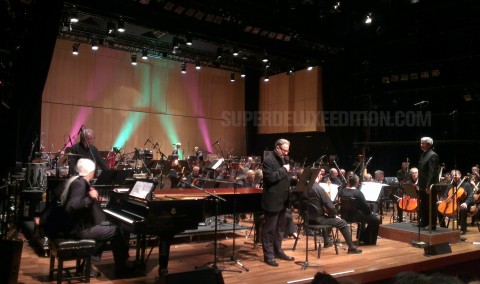 The show itself was superb, and Into Battle remix for orchestra lived up to expectations. The richness and warmth of those strings during Moments in Love was incredible and there were plenty of playful moments like when all the musicians in the orchestra shouted “And what happens now?” at the appropriate point. Conductor Richard Balcombe encouraged a reluctant Anne Dudley down from her seat in the audience to take a bow.

After some music from other composers –  John Tavener, Steve Martland and Michael Nyman – the evening ended with Anne Dudley (on stage this time playing piano) and her Rhythm Of A Decade, a superb orchestral mash-up of eighties music with a narration by Paul Morley. It started with the orchestral/piano intro from Two Tribes and took in a wonderful selection of Eighties music and rhythms including Ryuichi Sakamoto’s beautiful theme from Merry Christmas Mr Lawrence, Kate Bush’s Running Up That Hill, Tears For Fears’ Mad World, David Bowie’s Let’s Dance and New Order’s Blue Monday. Morley did a great job with his stream-of-consciousness ’80s narration and getting the timing right and coming in on cue.

But despite all my apparent planning (cassette single, T-shirt) it occurred to me sitting listening to this musical feast that I didn’t know what two of the members of the Art Of Noise looked like (J.J. and Gary). Jesus, what was I thinking! Surely, the first rule of the autograph seeker is to know who you need to approach with your request. The hunter must recognise his prey! This was starting to feel like major folly – “let’s just forget the whole thing and go home” I thought to myself. Then the door of opportunity opened…

The show was over and the auditorium was emptying when Paul “Music” Morley reappeared from behind the curtain. “Go on!” my wife encouraged in a ‘get-on-with-it-I-want-to-go-home’ kind of a way. Cue me trotting down towards the man as I whipped the inlay card out of the cassette. I wasn’t sure what to expect with Paul. He has the demeanour of someone who doesn’t suffer fools gladly. I remember him giving Frankie Goes To Hollywood’s Holly Johnson a very hard time on The Tube once, as Muriel Gray interviewed them. This was an artist he was supposed to be marketing and supporting! Perhaps fan interaction isn’t a ‘concept’ he subscribes to. He might just tell me to ‘fuck off’. In the end, he was charming. My lucky rabbit’s foot, the Into Battle cassette single had the desired effect “Wow, the cassette” he said clearly impressed (I’m a proper fan, honest). I handed him my pen and he wrote “the best version ever, the cassette! Paul Morley 30.11.13“. Yes! I thanked him, told him the show was fantastic, we shook hands and he said “thanks for coming”. I hovered for a few seconds as he signed a couple of ticket stubs for other people with my pen. The awkward ‘can-I-have-my-pen-back’ moment didn’t spoil the high. One Art-Of-Noiser down, four to go.

We headed back to the foyer/bar area to hover for a little while. I was genuinely thinking that I would likely just get one signature, and would have to be pleased with that, when… hang on? Isn’t that Trevor Horn?! Indeed it was. He was there looking relaxed, coat on, chatting to a few people. Without breaking stride, and with a spring in my step thanks to the Paul Morley encounter, I went straight up to Trevor and asked him if he’d sign the cassette inlay.  “Sure”, the answer came. I told him that Paul had signed it and that I was hoping to get a few more, “where is Paul?” he asked, handing back the now signed inlay. I told him he was still down in the concert hall somewhere and Trevor walked off, presumably to find him. Two down, three to go.

I bumped into Ian Peel, label manager of ZTT Records and started chatting to him about the show and my autograph quest. He confirmed that everyone from the original line-up was around somewhere and I admitted that I had a problem in that I didn’t know what J.J. and Gary looked like. At that moment Anne Dudley walked up to us and started talking to Ian about the performance. “Hi Anne, would you mind signing this for me, please?” She obliged. 60% was now showing on my own mental Art Of Noise ‘totaliser’.

This is where the T-shirt earned its stripes, the mountain certainly made a path to Mohammed. Someone came bounding up to me as I was talking to Ian, VERY impressed with my And What Have You Done With My Body, God? attire. “Paul, J.J. – J.J., Paul, ” Ian introduced. I was grinning like a Cheshire Cat. “How come I didn’t get one of these?” J.J. quizzed Ian, gesturing towards my T-shirt. I offered up my cassette inlay to J.J. “A tape” he laughed, “is this for real?” I showed him CTIS 100 naked in the tape box, much to his amazement. Anyway, he happily added his autograph to my quickly growing collection. Only one left now.

Gary had arrived around the same time as J.J. Jeczalik. I can’t remember who introduced me, but we walked over to a nearby table and he became the fifth and final original member of the Art Of Noise to sign the cassette edition of their debut release Into Battle with the Art Of Noise. I was so happy that I forgot to tell Gary that I loved his Shot Gun Mix of Billy Idol’s White Wedding, and I failed to ask him about when Paul McCartney came to the studio while he worked on a remix of Spies Like Us.

What was already a memorable evening of music had been elevated into something very special. I’d met the band and secured a set of autographs in one place. I’ll wager there aren’t many Art Of Noise records, CDs or tapes fully autographed by the ZTT-era band and there is a high chance that this could be the only Into Battle cassette single to boast such a claim.

To a ZTT fan who spent five or six intense years in the eighties buying picture discs, cassette singles, multiple twelve-inch remixes and hours poring over Paul Morley’s sleeve notes, the events of Saturday night are not far from an alternate, rewritten pop universe where a sixties music fan bumps into John, Paul, George and Ringo in the early nineties and gets them to sign a seven-inch of Love Me Do.

My improbable, unlikely search for the Art Of Noise was over and I now no longer have to consider what my favourite item in my ZTT collection is.

Into Battle with the Art Of Noise “to the death for life.”

43 responses to 19 Eighties / Into Battle: Searching for the Art Of Noise