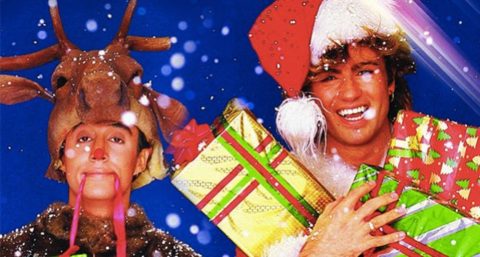 I’m Streaming of a White Christmas: Ed Sheeran is no. 1

Just when you thought Ed Sheeran couldn’t get any more annoying, here in the UK he has just kept ‘our George’ – Wham!‘s Last Christmas – off the 2017 Christmas number one spot. The perennial festive favourite benefitted from an Andrew Ridgeley supported campaign to get it to the top (for the first time) on the first anniversary of George Michael’s untimely death, but sadly for fans, it fell two places short, and only made it to number three.

The fourth single from Sheeran’s ‘÷’ album, Perfect, is the Christmas number one, while in true salt-in-the-wound style, the singer-songwriter also features on the number two single, Eminem‘s River. Perfect had in fact already reached number four earlier this year, just after the album came out, thanks to those ludicrous chart streaming rules (now tightened) and there were six different versions via streaming in the last few weeks – including duet versions with Beyoncé and Andrea Bocelli – to all but guarantee the song’s festive chart dominance.

Is this any different to Frankie Goes To Hollywood issuing multiple 12-inch versions of Two Tribes back in 1984? Maybe not, but it almost feels like a cartel at the top of the global streaming charts these days – mates working together to ensure a stranglehold at the top. Beyoncé guests on a Sheeran track, Ed works with Taylor Swift, writes for Justin Bieber etc. Now he turns up on an Eminem track. Band Aid cooperation aside, I don’t remember such incestuousness back in the day. Can you imagine Frankie guesting on a Wham! 45 or a ‘Culture Club featuring Simon Le Bon’ single? It was every man for himself!

Maybe the problem was that the Wham! campaign was only semi-official and felt rather impromptu and late in the day. Also, while George’s bandmate gave it the thumbs up, were other ‘stakeholders’ fully engaged? George Michael’s official twitter account made no mention of it at all and even if the campaign had benefitted from the blessing of the estate (unknown), Sony probably didn’t have time to create any physical product to support it, anyway. One could imagine that a four-track CD single, priced at £3.99, featuring seven-inch version, Pudding Mix, Instrumental (first time on CD!) and Everything She Wants sitting on the counter of every HMV and in the racks in Sainsbury’s and Tescos in the UK would have appealed to the core demographic and could have made all the difference. Or maybe not. Even putting the lack of physical product to one side, the label-controlled Wham! facebook page plugged a few festive playlists that featured Last Christmas, but there was no specific mention of the campaign, to rally the half a million followers into any kind of action.

Perfect had combined sales of 85,000. 45,000 of those were downloads and the other 40,000 ‘sales’ were made up from six million streams (150 streams is one sale, so six million equates to 40, 000). Last Christmas sold 62,000 copies (split unknown), less than 5,000 behind Eminem, so in all likelihood the Wham! song would have secured number two if the ever-popular Sheeran hadn’t been involved.

So Last Christmas still remains the biggest selling single in the UK – with sales of over two million copies – never to get to number one. I’m sure that will change at some point, but just not it seems, in 2017.