Japanese CD of the Day / The Rolling Stones: Sticky Fingers

November 20, 2013 by Paul Sinclairtags: japan CD of the day, The Rolling Stones 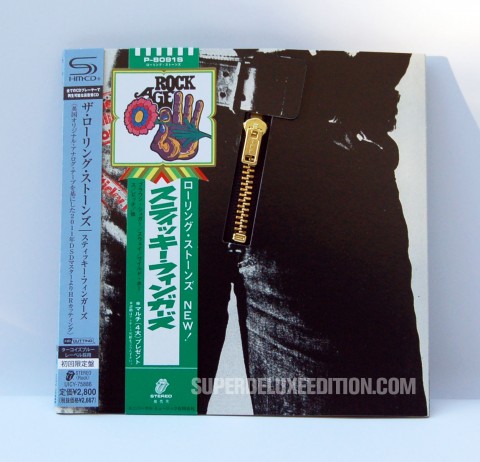 This is a brand new Japanese release (UICY-75886) of The Rolling Stones classic 1971 album Sticky Fingers.  The album comes packaged in true mini-LP CD form, replicating in precise detail the original vinyl, including a jeans with working zipper and belt buckle, which when unfastened, reveal well-filled underpants beneath.

The sheet insert from the original release is identical (except smaller..) as is the rear cover which featured the debut of what is now basically The ‘Stones corporate logo – the ‘tongue & lips’.

Cute though it is, we’ve had vinyl replicas of this album before, of course. Way back in 1994 Virgin had a similar release where the vinyl replica slotted into a hard plastic slipcase. These ‘Collector’s Editions’ (many albums were issued this way) were rather smart, but were something of a halfway house. For example Sticky Fingers had the working zipper, but it was not really totally accurate. For a start, the cover folded open, you could see clearly the full ‘underpants’ shot. That isn’t right. It’s supposed to be difficult to peak in – that’s part of the fun. Also, while the Virgin reissue maintained the photograph of the band – with Jagger 16 years ahead of Neil Tennant with ‘the yawn shot’ – they changed the design of the sheet which has the track listing and the big ‘tongue & lips’ on it. That’s against vinyl replica ‘rules’. Also these two bits of artwork formed an inner sleeve on the Virgin, which was also not accurate (the original had a plain inner sleeve with a separate sheet included.

Anyway… amazing though this new Japanese packaging is, it’s pleasing to say that you would want to buy this for the SOUND of the album even if the presentation was rubbish. Put simply, this is a truly stunning version of Sticky Fingers.

This new ‘mastering’ (transfer might be a better way of putting it) was used on the non-hybrid Japanese SHM-SACD in 2011, but this is its debut on a CD that is compatible with all players. It’s also significantly cheaper than the SHM-SACD. Here’s the science bit –  this is how this CD was created (taken from the booklet):

Just to confuse things further, these releases come in two forms. The version here, and a slightly more expensive “Platinum” edition in which platinum is used in place of the aluminium to form the reflective coating. The Platinum discs are fully compatible with standard CD players but will not play on CD players that can’t play CD-R discs. The platinum disc has the same mini-LP presentation but that sits inside a presentation case.

We’re as sceptical as everyone else about SHM or Blu-spec CD2 or whatever the latest ‘improvement’ is to encourage us to buy the same album yet again, but the proof is in the  Sticky Fingers pudding. This is a phenomenal listen even in ‘non platinum’ form.  VERY analogue sound, warm, natural, lots of clarity and separation, but smooth with it. Quite a low volume level (lower than the ’94 Virgin reissues) but distinctly better than the Virgin, or any other CD version we’ve heard. What they appear to have done is concentrate on the very best flat transfer that can be created, rather than ‘lets-try-and-make-it-sound-better’.

Highly recommended, if you can track one down. 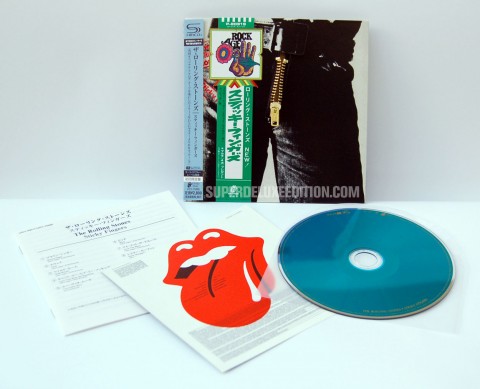 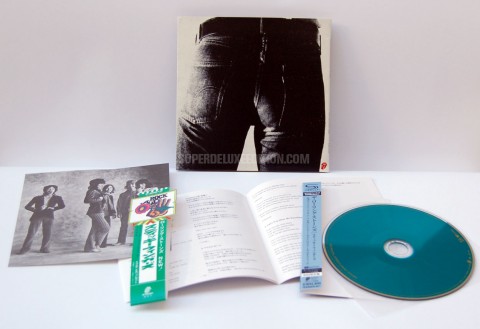 Rear of sleeve, Jagger yawning in photo (click to enlarge)

13 responses to Japanese CD of the Day / The Rolling Stones: Sticky Fingers