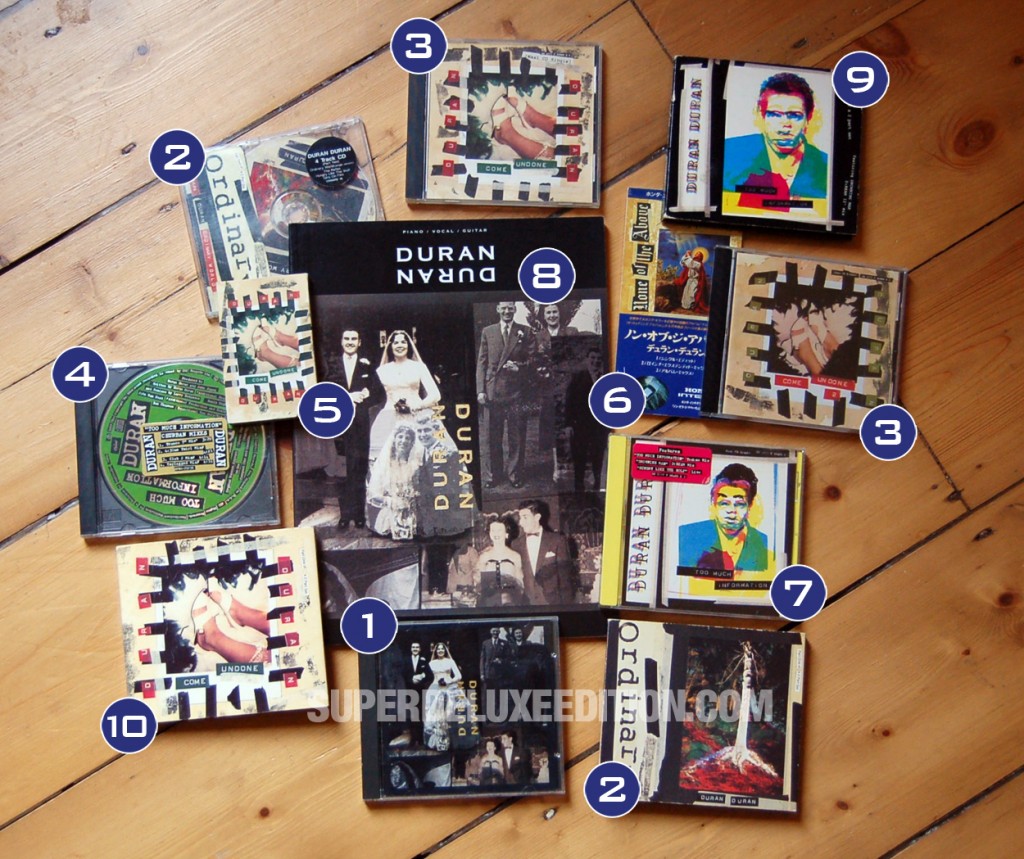 1989 – 1992 was not a great time to be a Duran Duran fan. It’s tempting to call it their ‘wilderness years’ but there were other neglected, and inhospitable eras such as the late 1990s (when EMI refused to release studio album number nine, Medazzaland, in the UK), so that might just be confusing.

Let’s just say the boys from Birmingham lost their way somewhat. Having released the hits compilation, Decade in 1989, the band followed it less than a year later with Liberty, a rather misguided step in the direction of soft-rawk.

1990’s Liberty was a significant commercial and critical failure, with lead single Violence Of Summer (Love’s Taking Over) epitomising all that was wrong with it. Boring, unmelodic, lyrically meaningless and basically a charm-free zone (try listening to ‘The Story Mix’ version without cringing).

Violence of Summer peaked at number 20 in the UK chart, and the follow-up Serious was their first single EVER to fail to get into the UK top 40 (peaked at no. 48). EMI gave up and didn’t even bother to release a third single. Liberty would also be the first Duran Duran studio album NOT to contain a UK top ten hit single. Lots of records being broken, for the wrong reasons.

As a fan, it was really painful. Somehow the band had gone from the epic, wistful landscapes and pop sensibility of Land and I Don’t Want Your Love (from 1988’s Big Thing) to the empty L.A. rock of Hothead and First Impression (both from Liberty) with one shake of the dice. It was as if when someone turned the light out on the eighties – a decade they helped define – Duran Duran lost their way, and stumbled around in the dark for a time.

The reason for re-visiting that period, is to put into some context, the success of 1993’s Duran Duran (referred to as The Wedding Album, from here on in). Ordinary World would have been a stunning achievement on the back of a successful record, but to come back from the depths and lows of Liberty with such a well produced, beautiful, melodic pop song was a truly amazing feat. Maybe Duran Duran needed the kick in the balls that was the public’s indifference to Liberty to get the juices flowing again.

Come Undone was the perfect follow-up single and proved Ordinary World was no fluke. The Wedding Album itself was full of great melodies and feel-good tracks. The album was stacked with potential singles – Love Voodoo, UMF, Breath After Breath and especially None Of The Above, but one of the big disappointments at the time was how EMI somehow contrived to release NONE of them as actual 45s. The Wedding Album could easily have been one of those records that spawned five or six singles, but having chosen poorly for the third release (Too Much Information) – and possibly blown their budget on a very expensive looking video and a zillion remixes –  EMI did not issue any further singles.

Despite this, EMI (and Capitol) cannot be accused of lack of effort for the singles that were released. There was a multitude of CD singles globally that contained a myriad of remixes, acoustic versions, non-album tracks, live performances and occasional dips into the back catalogue.

Here, for your enjoyment, is the second in our occasional ‘Record Collector‘ feature. We give you Duran Duran’s The Wedding Album. 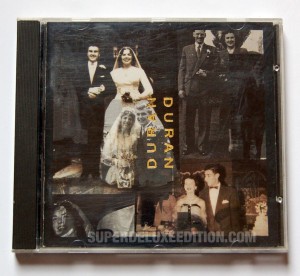 This is the standard 13-track UK CD version of the album. A special two-CD deluxe edition was later issued which added the three ‘B-sides’/non-album tracks (see more below) and a few remixes of the singles. Hopefully, when the dust settles on the Universal takeover of EMI, a reissue of this album will be on the cards. 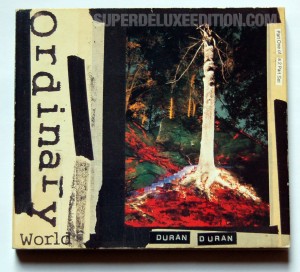 Released in January 1993 in the UK and December 1992 in the US, this was the single that propelled Duran Duran back to the higher reaches of the pop charts on both sides of the Atlantic. It ended up in the US and UK top ten at the same time, and to date is the last transatlantic top ten hit for the group.

EMI in the UK issued a lavish 8-panel digipack CD single, which featured Save a Prayer, Skin Trade and the only really good track from Liberty, My Antartica (Capitol Records in the US for some reason chose to debut album track UMF in place of Skin Trade on their US ‘maxi’ CD).

Bizarrely, this first of two UK CD singles featured the inferior album version (incorrectly labelled ‘single version’ on the packaging). The following week a further picture disc CD was issued (CDDDPD 16) which contained the actual single version that was being played on the radio at that time. More hits were included on this second CD including The Reflex, Hungry Like The Wolf and Girls On Film.

Ordinary World was not issued on 12-inch vinyl in the UK. 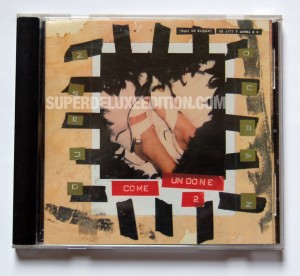 By 1993, record labels had realised that releasing two CD singles a week apart, with exclusive tracks on each, helped with chart success. Although this practice had become commonplace in the UK, it was rather rarer to see this in the US.

But that is exactly what happened with Come Undone. Capitol Records were also much more creative with bonus track selections than EMI in the UK. So the first Come Undone CD in the US featured the following tracks:

The ‘Parisan’ mix of Skin Trade was relatively rare and more interesting than the standard ‘Stretch mix’ twelve-inch and Stop Dead was a new track from The Wedding Album sessions.

The second US CD Single for Come Undone contained the following

Effectively four tracks new to CD in the US. Fallen Angel (sometimes called Falling Angel) was another new session track, To The Shore had been left off of Duran Duran’s debut in the US and the acoustic version of The Chauffeur had only been previously issued on the B-side of the Rio UK seven-inch single. The ‘US Remix’ of Come Undone was not issued on any of the UK versions of the single.

All this effort by Capitol was rewarded when Come Undone followed Ordinary World into the US Top 10. 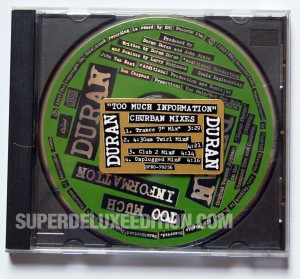 A four-track US promo CD that came without any booklet, informing the listener of track information via a sticker. Tracks are as follows: 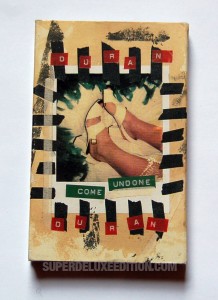 Having issued two of the three non-album tracks on CD, Capitol released the third – Time For Temptation – on this cassette single. 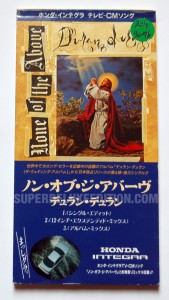 Japan were the only country to commercially release Wedding Album track None of the Above as a single. This three-inch ‘snap-pack’ contains a “12-inch Extended Mix” of None of the Above. This was later issued on the Canadian White Lines CD single as the “Driza Bone Mix” (they are identical). However the single edit of this Driza Bone remix was only ever issued commercially on this Japanese CD single (it’s an edit of the remix not the album track). 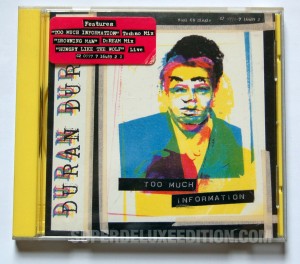 A seemingly endless amount of remixes of third single Too Much Information were issued. This US ‘Maxi’ single contained a “Techno 7″ Remix” by Ben Chapman (as well as the album version) and a D:Ream remix of LP track Drowning Man (which was actually released as a single in the US). A live version of Hungry Like The Wolf recorded at Tower Records in Los Angeles completes this single.

Duran Duran music books (‘Piano Vocal Guitar’) were released for every album (including Arcadia and The Power Station) until Liberty, which was never issued. Normal service was resumed with The Wedding Album, but none of the six Duran Duran studio albums since (including Thank You) have been released in music book form. 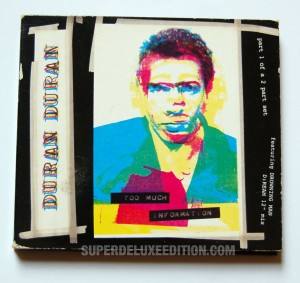 The final single in the UK from The Wedding Album was the first to get a commercial 12-inch vinyl single. Like Come Undone (see below) and Ordinary World, Too Much Information was issued as two separate CD singles which could reside in a deluxe digipack.  Yet more TMI remixes, plus a couple of live tracks. 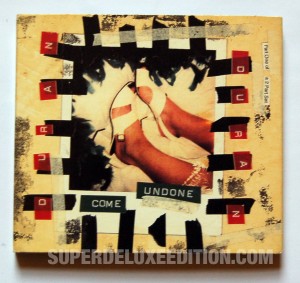 The final item in this ‘Record Collector’ run down, is the two-part UK CD single set for Come Undone. Like the UK release of Ordinary World some old hits were rounded up to entice buyers, and CD 1 contained some remixes including an ‘acoustic version’ of Ordinary World, which is actually a remix making it sound ‘acoustic’ rather than a true acoustic re-recording.

Like Ordinary World, Come Undone was not issued commercially on 12″ vinyl in the UK.

Unlike in the US, none of the UK formats for Come Undone featured any of the three ‘non album’ tracks (Fallen/ing Angel, Time For Temptation and Stop Dead). In fact they didn’t appear on ANY of the UK singles and were only issued on the limited edition two-CD version of The Wedding Album that appeared once all three singles had been issued.