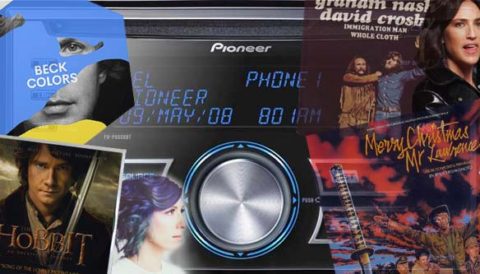 There’s nothing like being on holiday and having the whole family together in a rental car to bring to the fore ‘discussions’ about music. This happened to me recently as my eldest daughter (15) was grumpily decreeing that she didn’t want to listen to “old man’s music” and insisting that she ‘pairs’ mum’s phone (which had some of her favourite artists on it) via bluetooth to the vehicle’s audio system, so we can listen to her stuff. No way, Jose. I’m the driver, I’m in charge (and no one else can work out how to use the stereo anyway!).

This kind of music debate would not normally be an issue, since Grace would have her own phone and shove her earphones in, and be in her own world, but that phone was now lost, presumed stolen, in Naples, and she was ‘forced’ to listen to what I was playing.

I had very hastily cobbled together a Spotify playlist and ensured it was downloaded on my iPhone (to protect my roaming data) and I must admit, the selections were semi-random bringing together tracks from recent-ish albums I like (Beck, U2) with things like Ryuichi Sakamoto’s Merry Christmas Mr Lawrence!

It was really amusing to witness initial frosty distain (“ugh, skip this one”) turn into actual requests to hear certain tracks again! Here are my ‘findings’…

• EVERYONE loved Beck‘s ‘No Distractions’, from his most recent (and truly brilliant) album Colors. We got dangerously close to a group family singalong, the likes of which hadn’t been heard since my two daughters were very small and the days of ‘The Wheels On The Bus’, or ‘Ten Green Bottles’!

• I would have put money on Barry Gibb‘s excellent ‘Star Crossed Lovers’ (from his In The Now album) being dismissed as syrupy dross by my offspring, but no…. that too got the thumbs up! Evidence surely, that a good melody and lyric, written and performed by one of the all-time greats, casts a powerful spell and easily bridges generational divides.

• Joan As Police Woman‘s ‘Tell Me’ was an easy win, since I’ve played it a lot around the house and there’s something about the repetitiveness and simplicity of the chorus that connects easily with youngsters (also included on the playlist was ‘Valid Jagger’, from the same album, Damned Devotion).

• Crosby & Nash‘s Immigration Man was only partially accepted. My other daughter (Esme, 11) absolutely loved it, but Grace didn’t (although I suspect this was more a reaction to her sister liking it, so she ‘had’ to dislike it. I spent some time educating the kids about how this was a true story based on Graham Nash’s experiences (they pretended to be interested in this unwanted detail).

• David Bowie‘s ‘Dollar Days’ (from Blackstar) just didn’t work in the car. It’s a bit too subtle and it seemed to easily disappear into road noise and the blast of the air conditioning (“what’s this we’re listening to?”). I do really like the song, but even I was skipping it regularly after a while.

• I have become rather obsessed with Gabrielle Papillion‘s 2017 Keep The Fire album. It’s probably my most played album in the last year or so. It’s an AMAZING record. Anyway, I put Deep In The Earth on my playlist and it went down really well. The chorus in particular sounds great.

• Marina and the Diamonds ‘I’m A Ruin’ from FROOT is a brilliant pop song and it’s an established family favourite, after I belatedly discovered this album in 2016. I put this on to lull them into a false sense of security!

• No one, except me, liked Matthew Sweet‘s ‘Divine Intervention’. I found this annoying, because I love this song, but perhaps ‘Girlfriend’ would have been a better choice. Either way, I’m not sure the spiky, guitary production works that well in the car. Blind Melon‘s ‘Toes Across The Floor’ (from Soup) was also rejected too. Hmm. Can’t win ’em all.

• Neil Finn‘s Song Of The Lonely Mountain is amazing. A reminder (if any is needed) of how good a songwriter Neil is. Consider the fact that the dire Skyfall won Adele the Oscar for best song in 2013 and Song Of The Lonely Mountain wasn’t even nominated. Ridiculous. Anyway, this was a major success. A great one to pretend to bang an anvil to. My only error was to include the ‘extended version’ which has two minutes of instrumental noodling at the end, which no one wants to listen to whizzing down an Italian motorway.

• By far and away the thing I got a kick out of most, was that Grace and Esme both LOVED Ryuichi Sakamoto and David Sylvian‘s ‘Forbidden Colours’ from Merry Christmas Mr. Lawrence. I had also included the first track on that soundtrack album, the instrumental Merry Christmas Mr. Lawrence (which is surely one of the best pieces of film music, ever) but the one they liked was Forbidden Colours, with the singing and counter melody. I’ve always thought that Sylvian being able to turn this into a ‘song’ was an achievement of the highest order, since it seemed perfect as an instrumental.

So there we have it. There is hope for the next generation. I know this was more than a fleeting ‘let’s humour dad’ situation, because when we got back home, Grace was asking me the details of some of these tracks and adding it to her own playlists! I should add that in the spirit of openness we did also listen to some of Grace’s favourite artists, some of which I quite enjoyed!