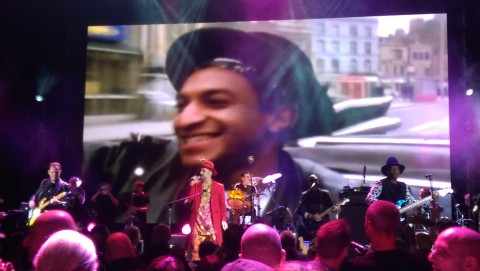 Jon Moss and friends performing at Hammersmith in September

This Rolling Stone gathers no Moss.

It’s been a busy few days here at SDE HQ. I attempted to take a few hours off from the world of pop-and-rock-music at the beginning of this week (it was my birthday on Tuesday), and indulge in a spot of shopping with the bonus of a rare kids-free lunch with my wife. Easier said than done though, since there I was in John Lewis, in London’s Oxford Street, having a peruse in the menswear department and I look up and who’s standing there doing the very same thing? Only Jon Moss from Culture Club!

My wife had actually picked up his jacket (which had fallen on the floor) and handed it to him, without batting an eyelid. I pointed out in a discreet whisper who it was and she looked at me blankly (it later transpired that she’d misheard me and thought I’d said something about ‘moths’..). By the time I’d thought I should say hello (I was at the Hammersmith Culture Club show in September) and oh-so-casually mention that I was the custodian of SDE, Jon had wandered off. Damn. Oh well, he-who-hesitates and all that. For the record, he was looking slim and very dapper. So if you’re reading this Jon, hello! 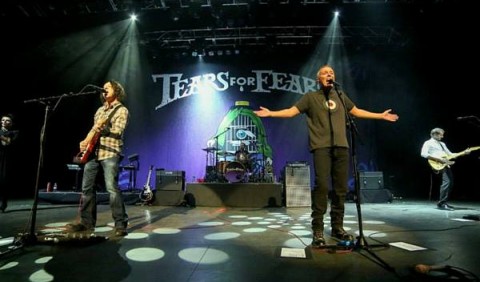 It’s fantastic news that Tears For Fears are to return to the UK stage next year. It really has been far too long. For whatever reason, in the last decade the band have played North America, South America, Australia and the Far East but not the UK. When I worked on The Hurting reissue back in 2013 there was some ‘talk’ of them playing that album in full at some UK shows in the autumn of that year, but much to my disappointment, it came to naught.

I was at their most ‘recent’ British gig back in 2005 when they played the Hammersmith Odeon in support of their last studio album Everybody Loves a Happy Ending. Roland and Curt played nine tracks from that 12-track album and while you have to admire commitment to ‘the new record’ (which was/is excellent), I remember being slightly peeved that it wasn’t until song 15 (of an 18 song set) that they played anything from Songs From The Big Chair! Even then, they just played the three big singles; Everybody Wants To Rule The World, Head Over Heels and Shout. Having reissued that album last year, it’s pleasing to see them incorporate The Working Hour (one of only three tracks that wasn’t a single) in their sets, but who would love to hear Big Chair performed live, and in FULL, on stage? C’mon lads, it’s only eights tracks!

A nice idea, but let’s not forget, they are back on stage primarily to promote the forthcoming new album – which is likely to appear in late spring/early summer – so don’t get your hopes up.

One final point, it is over ten years since Everybody Loves A Happy Ending, surely it’s time to ditch the stage backdrop which utilises the slightly psychedelic ‘Tears For Fears’  logo/script and replace it with something fresh and a bit cooler… 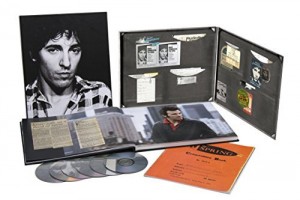 Some big guns out last week and Bruce Springsteen‘s The Ties That Bind – The River Collection outperforms Fleetwood Mac‘s Tusk deluxe by some margin on the UK physical sales chart. Bruce is in at no. 48 while Fleetwood Mac have to settle for no. 83. This is even more impressive when you think that that Tusk was almost half the price of The River box set on Amazon UK.

You’d have thought that the reissue of Simple Minds‘ hit album Once Upon A Time would have comfortably entered the top 100 on sales, but it’s nowhere to be found. Perhaps people couldn’t get hold of it. One SDE reader said in the comments section of the SDEtv video unboxing: “I went into my local HMV the other day thinking about buying the double CD yet there was no sign of it or even the box or the Blu-Ray. Very poor distribution I would say.” 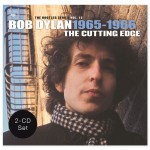 To be honest, as we close in on Christmas it gets tougher for an album-specific box to find a place in the top 100 physical releases because there are SO many greatest hits compilations clogging the chart up. Nice to see Bob Dylan‘s Best of the Cutting Edge (which I suppose is a hits compilation of sorts) going UP the chart rising to no. 80 from 93.