Hi folks. It’s the weekend, so time to take your foot off the gas and kick back with ‘Saturday Deluxe’ – the informal feature to round off the week where SDE reflects on the week past and the week yet to come. Or ‘next week’ as we like say in the 21st century. 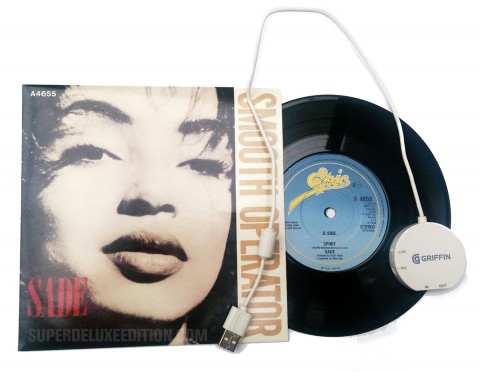 The Joys of Vinyl Ripping

One of the delights of deluxe reissues is getting all those ‘new-to-CD’ tracks that somehow have escaped being released on the format for decades. These are often obscure remixes from the 1980s (dub mixes, promo-only reworkings) or perhaps a forgotten B-side. If there has never been a deluxe reissue (Sade‘s Diamond Life comes to mind) then to enjoy all those non-album tracks within iTunes or burnt to a CD, you have to do a ‘vinyl rip’ of the songs in question, which means finding away of transferring the vinyl to digital.

With a rapidly increasing vinyl collection, thanks to picking up goodies at charity shops with some regularity (see Second Hand News), the idea of this has always appealed to me, but I’m never been that sure how to do it. I own a Rega Planar 3, so the idea of buying some cheap USB turntable for this purpose seemed a ridiculous, and anyway I don’t want TWO turntables, thank you very much. The Macbook Air that this blog is written with (other computers are available…) doesn’t have an ‘audio in’ and I once tried recording vinyl into the Olympus LS-3 recorder that I use for interviews, but for some reason that sounded rubbish (probably ineptitude from your correspondent).

Anyway, recently I fell across this video on YouTube that demonstrated how easy it was to get great vinyl rips for the cost of the right cable/adaptor and the shareware software Audacity. Enthused with this information, I just had to seek out the right audio in/USB adaptor for my laptop. Amazon has quite a few very cheap products, but many of them only have mono in, and obviously it’s essential that you have stereo. In the end, I selected the ‘iMic’ product from Griffin Technology. I suspect that this is semi-discontinued because I had to resort to third-party sellers on Amazon to get one and it ended up costing me £40, which seemed quite a lot compared to prices I was seeing on US websites.

But having paid for swift delivery and after following the instructions on that YouTube video, I can confirm that this worked an absolute treat. I already had the twin RCA phono cable that goes to 3.5mm stereo mini-jack (they look like this). This plugs into the ‘out’ sockets on your amp and goes into the iMic device (set to ‘line’) which then connects to the USB socket on your computer. I had some familiarity with Audacity, but it’s very easy to use. It can be a little temperamental with a few unexpected crashes, but projects regularly autosave and overall it’s a joy. Even better, it’s free! With practise you’ll find yourself ripping vinyl tracks rather quickly and it’s really satisfying tidying up the audio and ‘trimming’ tracks to size. Once in the digital domain, you can have some fun and create your own edits or simply use the inbuilt filters to remove ‘clicks’ and ‘rumble’.

If you’ve always fancied having a go, I’d really encourage you to do it. Don’t bother spending hundreds on USB turntables and other unnecessary hardware, you can comfortably sort this out for under £50, probably a lot less. All I need to do now is find the time to lock myself away and dig out all that treasured vinyl and have some fun! Not easy, but I suddenly have a new hobby :) 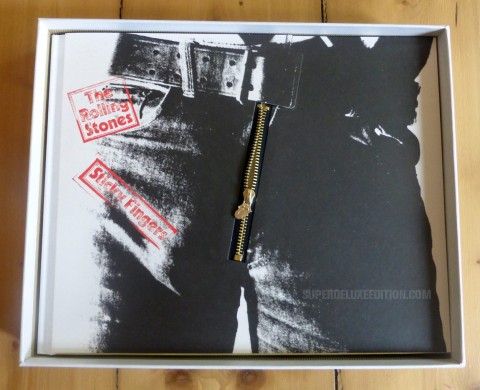 …The Rolling Stones have only gone and produced a decent super deluxe edition. Yes, after missing the target over the last few years (GRRR!, Some Girls) the Sticky Fingers super deluxe box set is really a superb  celebration of physical product. High quality materials and exceptional design really make this a fine item. This set also doesn’t bundle in expensive vinyl that listeners might not want (other than the bonus seven-inch) and therefore also avoids the kind of duplication that is prevalent with the Led Zeppelin box sets. And unlike the Led Zep sets, you get something exclusive in the box, in this case the 13-track CD Get Yer Leeds Lungs Out. AND it’s cheaper than those sets by over £25. The only thing that stops the Sticky Fingers SDE getting an ‘A+’ is the fact that they’ve used the 2009 remastering (not the infinitely superior Japanese mastering from 2013) and the cheapskate DVD. The video disc only has two tracks and is effectively an advert for the separate Marquee Club release. Apart from that, the numbered super deluxe edition is highly recommended.