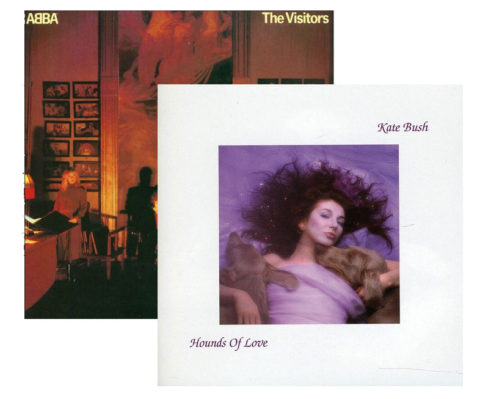 It’s national album day today. I’m not sure who decided it was national album day, but chances are it was the same industry that has delivered Spotify and other streaming platforms that encourage people to listen to theme-based playlists and just sample ‘the best’ tracks from albums and quickly move on.

I’m not going to do anything gimmicky to ‘celebrate’ national album day, because I guess like many of you, EVERY DAY is an ‘album day’ for me. I love listening to music and love albums.

However, it did get me thinking as to what my ‘first’ album was. My dad had The Beatles‘ studio albums, which I was aware of in the 1970s but I’m not sure I had digested whole albums back then.

While I do remember taping things off of mates at school (Alf, No Parlez, etc.) I would make a case for Kate Bush‘s Hounds of Love as the first album that I went out (at the age of 15) and bought with my own pocket money. It took me two weeks to save the £5 or so it would have cost back then and so that tape became a treasured possession. How I loved that cassette. It was ‘XDR’, which stood for eXtended Dynamic Range and the presence of this ‘technology’ was signified by three ‘blips’ at the beginning before the music started. I have no idea whether it really ‘did’ anything, but it seemed cool at the time. Parlophone used it on virtually everything, including all the Pet Shop Boys albums and cassette singles.

The other thing I liked about the Hounds of Love tape was that some bright spark had worked out that if the whole tape case (the plastic container you put the cassette in) was transparent then you could have a bigger inlay that wrapped around the entire cassette, and not that thin ‘strip’ with a few titles squashed into them. If you don’t know what I’m talking about, check out the image below (pinched from discogs): 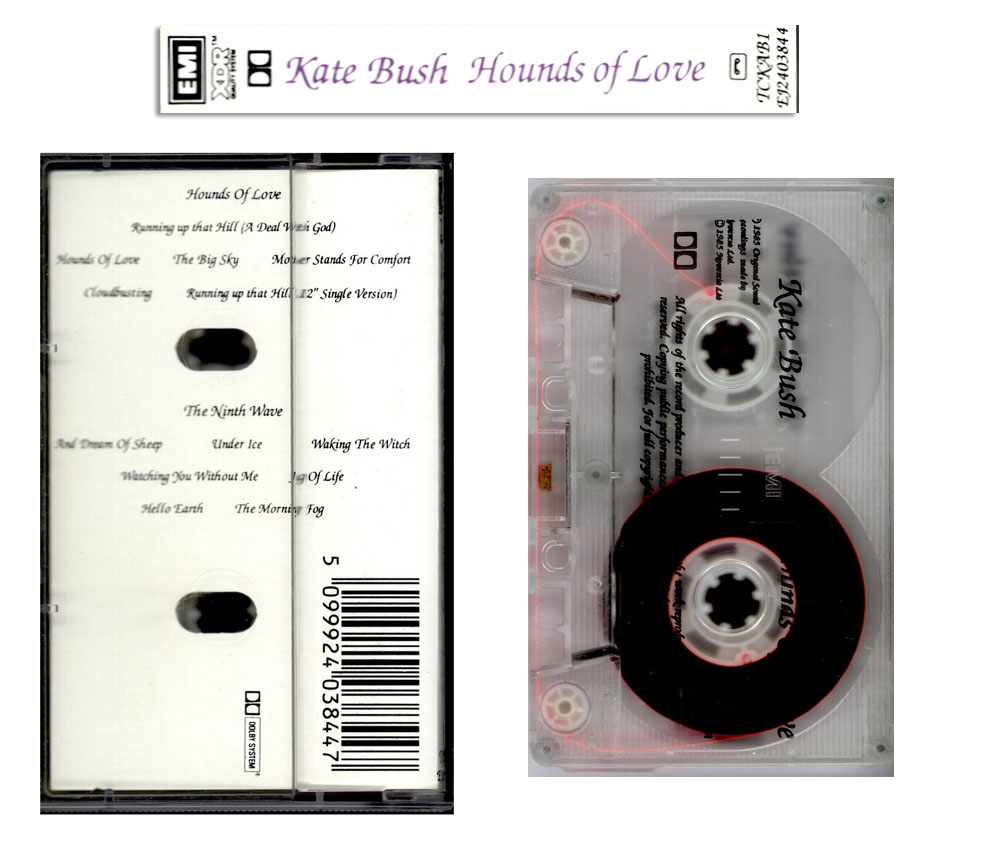 So as you can see, the track names were spread around and side two had this mysterious subtitle ‘The Ninth Wave’. As if it couldn’t be any more attractive, the brilliant 12-inch version of ‘Running Up That Hill’ was appended to side one (I would consider dumping  an extended version into the middle of an album sacrilege now) and the cassette tape itself was transparent which made it look a bit like a groovy reel-to-reel recorder that Harry Caul from The Conversation might pay close attention to.

All this would count for naught, of course, if Hounds of Love wasn’t such a brilliant album. I took this tape with me on a school trip to Russia and have vivid memories of listening to The Ninth Wave on my Walkman on an overnight sleeper train from Moscow to St Petersburg. The clickety-click of the wheels on the track, and the lilting rhythm of the train playing out against dreamy songs like ‘Watching You Without Me’ and ‘Hello Earth,’ lingers long in the memory. In fact, it’s stayed with me an entire lifetime. There is the power of an album for you.

If paying for it and taking the initiative for the acquisition, is a key factor then Hounds of Love it is for me, but the first album I remember ‘getting into’ from start to finish was ABBA‘s The Visitors. This was their last studio album and it was released in November 1981, when I was still 11 (about to turn 12). I knew all the ABBA hits of course, from Top of the Pops, but I don’t ever remember my Dad playing an actual ABBA studio album in the car until The Visitors came out.

Even at that young age I remember thinking there was something very different about the record. It starts with a load of pulsating synths, like some bastard child of Vangelis and Kraftwerk and the rather un-ABBA like opening lines are:

The Visitors is a phenomenal album and brilliant to play in the car. We’d be whizzing up the M6 at some godforsaken speed and whole family would ‘bounce’ together when the the chorus and drums burst in:

The song ‘The Visitors’ definitely wasn’t a pop single, but it was the title track to the album and kicked everything off. Who were these ‘Visitors’? The end of side one had a similarly curious song, Soldiers. It was catchy, but lyrically strange. These were songs that were grabbing my attention not the more traditional ABBA fare like One Of Us (which was the biggest hit from the album).

The Visitors ends with two of the most affecting songs Benny and Bjorn ever wrote. The beautiful ‘Slipping Though My Fingers’ (about watching your children grown up) was rescued from obscurity by its inclusion in the musical Mamma Mia and Like Angel Passing Through My Room is utter perfection; a sorrowful hymn-like number of remembrance and regret (“And it all comes back to me tonight, in the gloom / Like an angel passing through my room”).

Of course I was far too young to understand what was going on in some of these songs, but mood, music, words can still combine to have an impact, even if you can’t put your finger on what is going on.

‘Hello Earth’ and ‘Like An Angel Passing Through My Room’ are two of the best songs from their respective albums, but neither were singles and so if my dad hadn’t bought The Visitors and I hadn’t bought Hounds of Love I’d never have heard either of them.

I was quick to learn that back in the day, however good they may be, ‘the hits’ are often a bit of a compromise and the really interesting stuff was hidden on the albums. Albums really can change your life, so gimmicky or not, I’ll wish you a happy national album day and would love to hear about your ‘first’ albums.