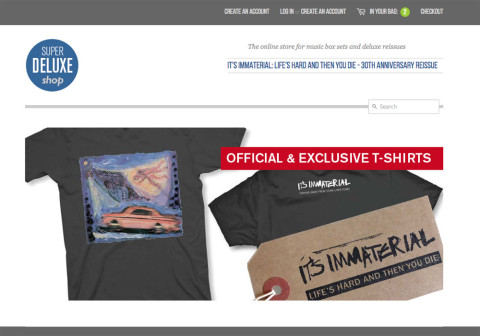 A Nation of Shopkeepers…

Two important things have happened this week. The first is that the It’s Immaterial 30th anniversary reissue, that I’ve been banging on about for a while, was released and the second was that the long-in-the-planning SuperDeluxeEdition online store went live…

The two events are connected. The original plan was to fill ShopSuperDeluxe.com with a wide array of box sets – old and new – along with a selection of used items, and music related products such as framed vinyl and T-shirts etc.

That plan hasn’t been abandoned exactly, but I’ve spent the last year or so working on the deluxe edition of Life’s Hard And Then You Die and there seemed to be some synergy in timing the launch of the store to the launch of that reissue. John Campbell and Jarvis Whitehead from the band have been great and were enthusiastic about the idea of producing a limited run of Driving Away From Home T-shirts which we are bundling with a copy of the new 2CD reissue. I should add that if you’ve already bought the reissue elsewhere, the T-shirts are available separately.

Because this is a ‘super deluxe’ related enterprise, we wanted to make it a bit special and not just bung a T-shirt in a jiffy bag and stick it in the post, so each 100% black cotton, ‘softstyle’ T-shirt comes with a hand-stamped garment tag (see below). 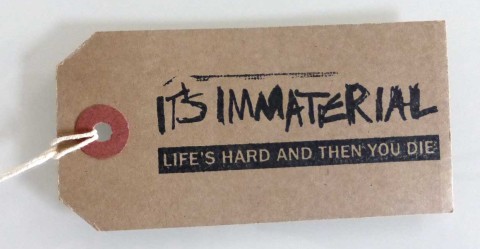 Even better, the first 100 were sent up to Liverpool where John and Jarvis signed them. I thought this was something a little bit different from the usual signed CD. Obviously, if you have the reissue too, the CD gatefold wallet is a great place to store this item once you are wearing your new T-shirt! I can tell you that as of 4pm today there is only about 20 or so of the signed versions left, so if you are interested, head over to ShopSuperDeluxe.com and place an order while you can.

You definitely can expect more items on ShopSuperDeluxe.com in future that are specifically related to reissue projects that I am personally involved in. For example – and here’s some news for you all – I’m working on a Sam Brown box set at this moment in time.

In terms of stuff coming soon to SSD (ShopSuperDeluxe), we do have a small supply of box set rarities which you should look out for, including Depeche Mode, Thin Lizzy, Frankie Goes to Hollywood and more. These are likely to go in the blink of an eye, so the best way to ensure you know when new stock hits the store is to join the ShopSuperDeluxe mailing list:

If you use social media, you can also ‘like’ the facebook page.
Visit the new SDE online store, ShopSuperDeluxe.com