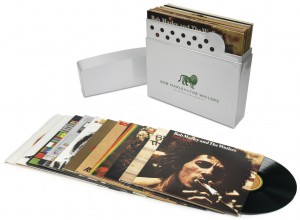 Just as you’ve justified spending over £250 on the Queen vinyl box set Universal Music go and announce another lavish and expensive vinyl box. The Complete Island Recordings is a collection of Bob Marley & the Wailers studio and live albums – so that’s eleven releases and 12 vinyl records.

While you wrestle with whether you ‘need’ this box, a fresh spanner in the decision-making works is that there are TWO versions; a standard ‘rigid board’ box, and a metal box. Both replicate the design of a ‘zippo’ lighter and both contain the same records although with the metal set (known as the Collector’s Edition) you do get an anniversary slip mat and two photos.

The flashy metal box is incredibly expensive. Some would say ludicrously overpriced. It’s £448 on Amazon UK. Although big prices make for big savings for the canny shopper. For example it’s £81 cheaper on Amazon Italy – that saving is enough to get you a Sticky Fingers super deluxe with change leftover.

As was pointed out in the original news post, the two different versions of the Bob box have caused no end of confusion on some Amazon sites. Amazon UK only have the metal box available for pre-order, with the standard set (which should be priced around the £150 mark) ‘Currently Unavailable’. Some of you may have noticed there is a definite issue with many Universal box sets at the moment which should be available for pre-order on Amazon UK, but aren’t. The Jam, Steve Hackett and Queen are three sets ‘unavailable’ for whatever reason. SDE is keeping a close eye on this situation and will update as appropriate.

Across the Atlantic, Amazon US and Amazon Canada have listed the Bob Marley boxes the wrong way around allowing fans to pre-order the Collector’s Edition for the price of the standard set. The US site has now pulled both listings (now ‘Currently Unavailable’) and it will be interesting to see how they deal with existing orders. The Canadian site still has both listings live, with the cheaper box priced at an eye watering $957 CA and the Collector’s Edition ‘just’ $350 CA. Again, time will tell how Amazon deal with this. It is highly likely that anyone who pre-orders the metal box for the cheaper price will get the standard set regardless of how the listings look at the moment. Back in May it was announced that the Classic Album Sundays team were collaborating with ZTT Records to produce an audiophile box set of the Art of Noise‘s debut album Who’s Afraid of the Art of Noise. The box was being marketed direct-to-fans via PledgeMusic and a 2LP 45RPM ‘audiophile’ edition of the album was being offered, along with a twelve-inch reissue of the Into Battle EP and contemporary 12-inch remixes of Beatbox and Moments in Love (plus a book and and art print etc.).

This project has now been CANCELLED. The message from the CAS team earlier this month was as follows:

“Due to increased production and manufacturing costs and problems locating some of the original master tapes we have decided to cancel this campaign as we don’t feel the Box Set would be of a high enough quality and value for money we hoped to release.

We would like to take this opportunity to thank everyone who Pledged and all of those who expressed interest throughout the campaign. CAS will be back with new campaigns and new releases in the near future. Your pledge will be automatically cancelled.”

In reality, there was simply not enough interest in this set from the hardcore fans that CAS needed to attract to make the project work. We can speculate on the reasons, but at £75 it was only £10 cheaper than last year’s celebrated Frankie Goes To Hollywood Inside The Pleasuredome box which offered much more content, including a decent amount of unreleased material.

Also, the team behind that FGTH set had Frankie in their DNA, with Ian Peel curating plus Philip Marshall and Kevin Foakes handling design. They delivered a set which was full of fan-pleasing attention to detail and quirky delights such as the flick-book or the cassette single. This, arguably, wasn’t the case with the Art of Noise project – even the artwork used to promote the box on PledgeMusic wasn’t what most fans would consider to be the ‘correct’ cover of the album. Also, even though it was a PledgeMusic project, the Frankie box benefitted from the experience of having a ‘proper’ record label – Union Square Music – behind it. Their Salvo imprint had issued masses of ZTT releases over the last few years – invaluable experience.

You need to know your audience and there was a definite question mark here, with the Art of Noise project. The promise of ‘contemporary remixes’ demonstrated that. The majority of the target demographic would not have been interested in new remixes. In fact, most would positively hate the idea, but yet that was one of the key selling points. Also, from a practical point of view you need the multi-track tapes to be available –  and in good condition – and that could have been an issue, given what was said in the official statement. Another thing to consider is that Frankie were a proper band, with enormous hit singles who had a significant impact on the pop-pickers of the day. Those memories and the fun of that time has endured. The slightly abstract studio shenanigans of the Art of Noise and the one number eight hit single don’t rival this. Or to put it another way, not-enough-people-like-the-Art-of-Noise-to-buy-the-box-set.

But perhaps the biggest death-knell was the fact that there was very little new on offer to generate a real sense of excitement. A simple vinyl reissue of the nine-track album and a twelve-inch of Into Battle – both reissued successfully on CD in the last few years – and some other ‘bits’ ultimately fell a bit flat. Especially for £75.

Despite the disappointment, the PledgeMusic platform has at least allowed CAS to ‘test’ the market without losing a fortune – hopefully they’ll be back with other campaigns that will be fully realised.

If you’re an Art of Noise fan, do you agree with this assessment? Leave a comment and let us know why you didn’t pledge!