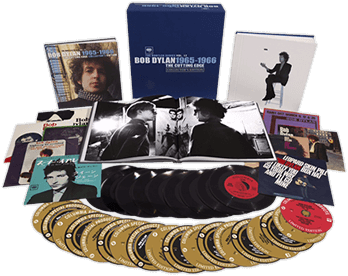 Be honest, did you ever think a music box set would be released that included “every single note recorded by Bob Dylan in the studio in 1965/1966″? Me neither, but that’s exactly what Sony/Columbia have done with their ‘Collector’s Edition’ of the newly announced Bootleg Series Vol 12, which has the moniker The Cutting Edge. 18CDs isn’t actually that much – we’ve had bigger sets from King Crimson and The Grateful Dead, but I guess it’s quite a lot for such a narrow period of time (two years, 1965-1966).

The 379-track collection includes a ‘certificate of authenticity’, although what that’s supposed to prove, I don’t know. If someone goes to the trouble of faking this lavish box set with its 180-page 11″x 11″ hardcover book, I’m sure they’d have the enterprise to fake a bit of paper that has the words ‘certificate of authenticity’ on it! Also, since there are only 5000 of these behemoths you’d think Bob could have signed them, especially for the price, which is a hefty $600 (about £400). Talking of the fee required, you can’t help but feel someone came up with a price point first and then tried to justify it with the content…

“A leopard skin printed spindle? I like it, what else!?“

“A strip of film cells from an original print of the ‘Don’t Look Back’ film – great, we’re done here!”

The big problem is that Sony aren’t officially supplying any of these Collector’s Editions from anywhere outside the USA, so the European Dylan fan has to pay very expensive shipping costs ($80 or £50 to the UK) and then worry about import duty and VAT which I have calculated is £108 for this box set. So import duty and delivery charges to the UK add an incredible £158 to the ticket price – that’s $240, so us Brits pay $840 for ‘our’ boxes! Great!!

Despite the all-encompassing and lavish nature of the Collector’s edition, those costs make the £100 six-CD deluxe edition seem like excellent value – if we’re concentrating on the key component – the music – you get more than a third of what’s on the big bugger for less than a fifth of the price! 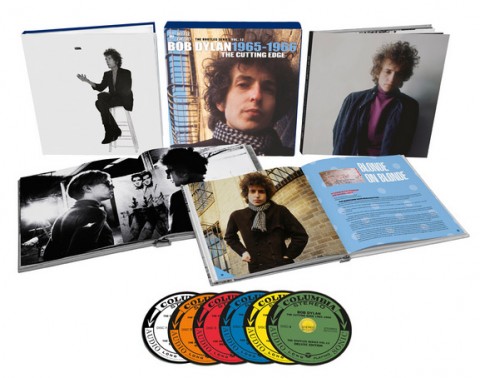 It’s certainly an intriguing prospect being offered EVERYTHING recorded during album sessions, and I wonder, is this the beginning of a new Uber Deluxe Edition (yes, I know U2 nicked the title) where at some point in the future the super deluxe editions of, say, Sgt Pepper’s Lonely Hearts Club Band, or Hunky Dory will be demoted to ‘mid-range’ status, standing in the shadow of a £300-400 uber deluxe which gives you every take, every cough, every ‘let’s take it from the top’ from album sessions. Imagine a Let It Be ‘collector’s edition’, like the new Bob set? Pleasure or pain!?

Friday came and went and I didn’t have a David Bowie Five Years box in my hands. Argh! Because I took advantage of my own advice, I bought my vinyl box from Amazon Italy for £148 (thanks to this long-since-ended deal alert). Fantastic price, but patience is required since the box isn’t going to be delivered until the end of next week. Oh well. I did get the individual CD reissues. In case you are wondering, they all come in jewel cases, with eight-page booklets with lyrics and photos etc. Not too bad for about £8 each. 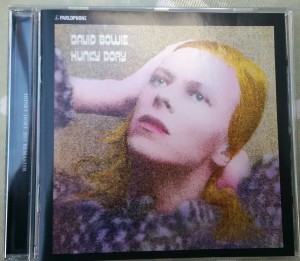 They’re not perfect – I know the RCA logo was here on some editions but the Parlophone logo sits uneasily on the top left of the Hunky Dory front cover (and the bottom left of The Man Who Sold The World), and the layout, fonts, and colours on the spines are all over the place.

The front cover of David Bowie/Space Oddity looks as dodgy as ever, so the first thing I did was flip the booklet around to promote the ‘wrong’ 1972 Space Oddity image, although that artwork is really washed out and yellowed. A quick comparison with my 1990 Rykodisc shows the 25-year old booklet looking much sharper with more natural skin tones than the new one. I’ll be interested to hear from those of you that do have the new CD box with the vinyl replica sleeves – what’s the verdict? I plan to do an SDEtv video soon, which takes one Bowie album and illustrates all the various CD issues over the years – stay tuned!