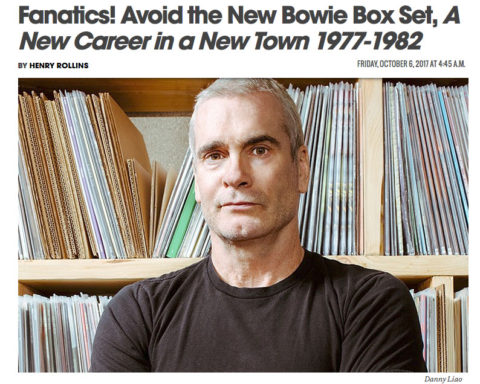 Every now and then it all kicks off here at SDE and this week has definitely been one of those weeks, with the ongoing David Bowie A New Career In A New Town mastering debate (master-bate for short) and then, yesterday, the bizarre goings on with various UK retailers seemingly reacting in realtime to this blog’s criticism over the pricing of the newly announced Paul McCartney coloured vinyl!

If you’ve not had a chance to read SDE this week, first of all you need to take the rest of the day off to give give yourself time to digest the Bowie story and all 374 comments on the post. If you don’t want to do that, the short version is that some fans don’t like much of the remastering on the new box set (compressed, too much bass etc.) and are particularly irate about the ‘error’ on the title track of Heroes, which Warners admitted was an attempt to fix a ‘loss of energy’ on the master tape, and acknowledged that they probably could have communicated about this more transparently. Other fans don’t mind the mastering, some really like it and there’s a few who profess that they probably wouldn’t have noticed the Heroes issue, if it hadn’t been pointed out!

Warners stance is that the box isn’t faulty, and no replacement discs will be pressed. However, whether they stick doggedly to that remains to be seen, because the issue isn’t really going away any time soon. Legendary British producer Stephen Street was tweeting about it during the week. First off, he liked my Lodger review which compared remix with remaster, and I was chuffed when he told his 9,000 strong following how much he liked SDE!

But interestingly, Stephen chipped in with regards to the Heroes issues with his own thoughts, not once, but twice, concluding “sounds like a mistake to me”.

There is definitely a bass boost added to Heroes remaster at 2:40 which is suddenly turned off again at 2:49. Sounds like a mistake to me!

Listening again, it's not just a bass boost, it's like a 'loudness' button is turned on for those bars. Liking the remix of Lodger though!

You know ‘word has spread’ when actor, musician, radio host Henry Rollins writes an article titled “Fanatics! Avoid the New Bowie Box Set, A New Career in a New Town 1977-1982” on the LA Weekly website. Admittedly, he has probably been influenced by the reviews on Amazon (which he references) but he goes on to say “Until they straighten them out, if they ever do, I would strongly recommend you stay well away from this release.”

I don’t know where this will end, but it’s a fascinating insight into the power of social media and how loudly fans’ voices can be heard these days, via various online forums and sites like SDE.

Read the about how Parlophone responded to the criticism this week 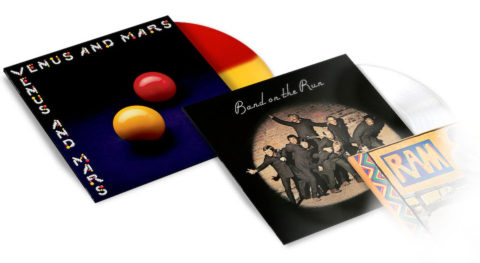 It was a comedy of errors yesterday as Capitol/UMe/MPL proudly announced that eight of Paul McCartney‘s albums were re-re-released on Capitol and that each record would be available as a limited edition coloured vinyl pressing.

They hadn’t got their ‘ducks in a row’ (as my wife likes to say), so the announcement came at noon, but no one ‘in retail’ was ready. Links on Macca’s site took those in the UK/Europe to the USA uDiscover store, where we saw a lovely vinyl bundle (now gone!) that wasn’t available to us. The Band on the Run white vinyl link went to an Amazon UK page that listed the 1992 Paul McCartney Collection CD – in short, the whole thing was a bit of a mess.

A few hours later, the coloured vinyl limited editions did start filtering through on sites like The Sound Of Vinyl, although as the screenshot belong shows you, they wanted £35 for most single vinyl albums and £43 for Band on the Run! Meanwhile, the recent Flowers in the Dirt double vinyl (with bonus tracks) was only £27! 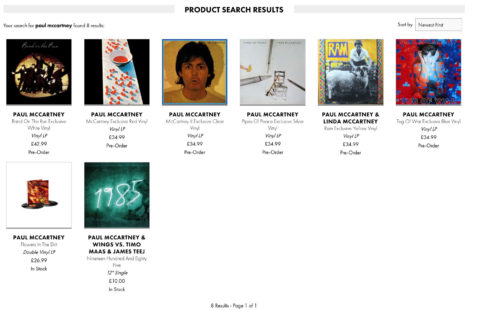 I posted about this rip-off and within the hour all the limited vinyl had been pulled from the listings, only to return about an hour later at a ‘new’ price of £29.99. But even that didn’t last long and now none of the sites which listed them yesterday (uDiscover USA, uDiscover UK, The Sound Of Vinyl and RecordStore.co.uk) have any of the coloured vinyl listed at all. Which either means they’ve sold out almost instantaneously (seems unlikely, even for Paul), or McCartney’s team are having a re-think. Unlike with David Bowie, the criticism was almost unanimous. Charging close to £10 extra just because it’s a coloured pressing did not go down at all well with fans.

I will keep my ear to the ground as far as this is concerned and we will wait to see if these coloured vinyl pressings will be returning to an online shop near you, anytime soon.