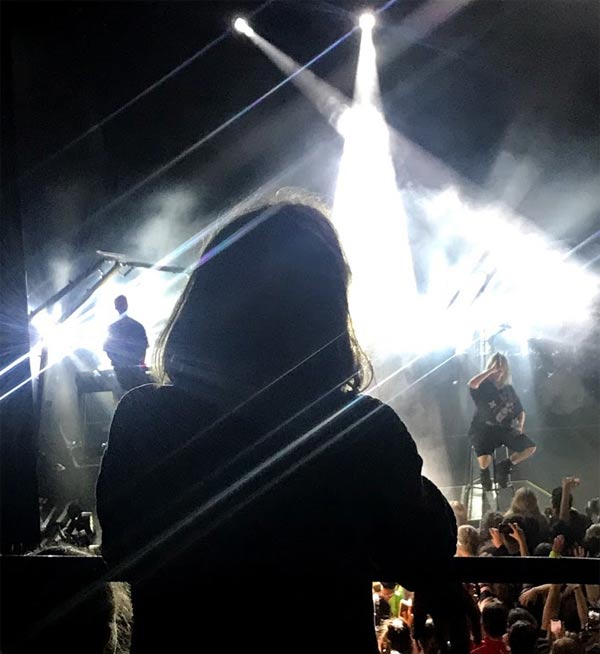 Your first gig is something of a coming-of-age-event and so is taking your child to his or her first gig as a parent. But for it to ‘count’ I’d say that the child has to really want to go and it needs to be their idea. For example, I took my eldest daughter to see a-ha at the Royal Albert Hall in 2009, when she was only seven years old and, to be honest, it was more about her keeping me company (my wife wasn’t interested) than any desire on her part to see ‘Hunting High and Low’ played in its entirety with a full orchestra! As a result she spent the first half enquiring when we were going to get the chocolate ice cream I had promised her in the interval and the second half asking ‘when are we going to go home?’

Daughter number two (aged 11) is now mad on American teenage sensation, Billie Eilish. She wanted to know if we could go and see her, since she was playing in London. I said I’d happily take her but there was a serious problem in that all three shows at London’s Shepherd’s Bush Empire were long sold out and tickets were only available on the re-sale market, with prices astronomical. “But you’re in the music business”, she challenged. I guess this is true (although I don’t really think of it in those terms), but regardless, the Billie Eilishs of this world aren’t exactly my natural stomping ground. My kids often tell me derisively that I write about ‘old people’. Ha! The cheek of it. Billie Eilish is the opposite of old. In fact, she’s only a year older than daughter number one, who remembers being dragged to a-ha (she now likes ‘Take On Me’ and I’m getting some kudos nine years later).

But let’s face it, we’ll do anything (well, most things) for our kids, so I did some ‘reaching out’ a few weeks back and after a tense period of waiting, during which I was quizzed daily (“have you heard anything?” “any news?” “well…?”) confirmation came through that Cinderella would go to the ball…. albeit with her Dad in tow. Yes, I had three tickets on the guest-list! ARGHH!!! My daughter was bouncing with excitement! We needed three tickets because of course she wanted to bring a friend. Going with me on her own would be ‘boring’ (thanks!).

An extra complication was that the gig was on the Monday just gone. A school night. Okay, it’s a bit of a one-off, so the rulebook goes out the window for this one evening. I couldn’t find out stage times before we left and all the websites I looked at said ‘7pm’. Even though I knew a seven o’clock start was rather unlikely, I thought that given that there was going to be a lot of young fans there, it might start quite early to give kids/parents a chance to get home at a reasonable hour. I also knew I’d never be forgiven if we missed any of it. So we arrived just after 7pm, collected our tickets (with wristbands) and made our way upstairs (where you had to go if you were under 14). Because it was early, we got great seats on the second row of the circle.

I nipped off to the ‘VIP bar’ (advantage of having a wristband) and got some drinks. I casually enquired at the bar if they knew what time Billy was on-stage. “About 9.20” came the answer. If this had been a bad sit-com I’d have spat my drink out in incredulous fashion. Instead, I probably just looked a bit crestfallen and repeated “9.20?”, hoping I had misheard. I had been naive to think Billy Eilish was worried about fans’ homework and getting a good night’s sleep. A look at the watch confirmed the time now was 7.20pm. It was going to be a long night. 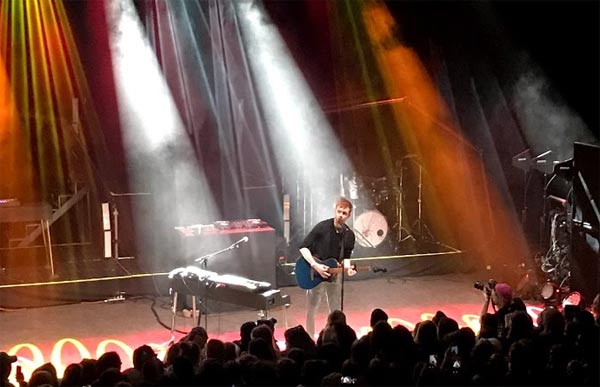 The ‘good’ news was that there were two support acts. The first was Billie’s brother Finneas O’Connell, who co-writes and produces his sister (and does acting too, having appeared in ‘Glee’), the second was American hip-hop duo EarthGang. When Finneas came on at about 7.45 the screaming was louder than anything I’ve ever heard at a gig. This was the support. I looked around and just saw a sea of screaming girls, aged between probably 10 to 18.

Finneas was alright. The guy is obviously talented. He can play guitar, keyboards and do that programming-beats-while-playing-along thing. The songs sounded okay in a slightly generic way, but I could hardly hear anything because there was so much screaming. No clapping – at all – at the end of songs, just screaming. Really weird.

I was less impressed with American HipHop duo EarthGang. The concerned parent in me kicked in at this point. They were entirely inappropriate for the fanbase and the audience and to be honest, I think it was a mistake having them on the bill. I’m no prude, and can roll my eyes in an ‘I’m not impressed’ fashion when the odd swear word makes an appearance in songs my kids are playing, but this took things to a whole new level. One ‘song’ was literally five minutes of these two bozos on stage demanding that a room filled with kids, many of whom are probably studying for their GCSEs, sing “I don’t give a fuck”. It was ridiculous. Yes, there were older teenagers in the room, but this gig was open to kids as young as eight years old and my daughter and her friend are 11. Not impressed. They were dressed like bin men, which was appropriate, because they were rubbish and the language was filthy. 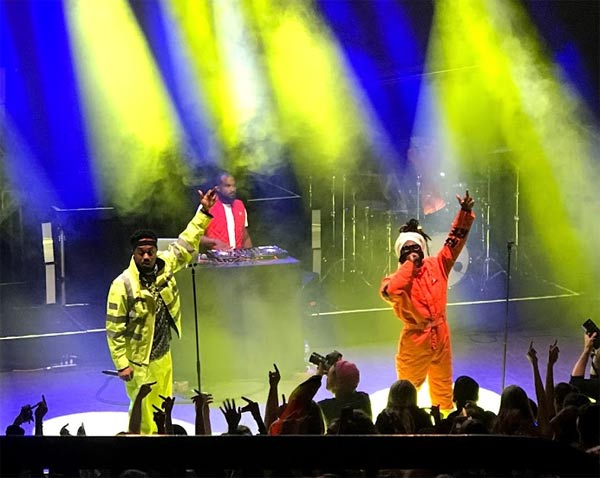 Finally Billie appeared, from behind her spider-shaped stage set more or less on schedule at 9.20. She was in her ‘street’ gear of baggy casual clothes. She was on stage with a drummer and her brother who was handling most of the music.The screaming was insane. Incredibly loud and continuous. Not so much Beatlemania but Billiemania. It did make me think this must be what it was like watching the Fab Four back in the day, when they couldn’t hear themselves play, because I certainly couldn’t hear Billie sing. It was incredible. I was sitting in this crowd full of screaming girls, like Phil Collins as he watched The Beatles in A Hard Day’s Night. The WHOLE crowd were singing along to every song, very loudly. Occasionally, Billie did the time-honoured thing were she pointed the microphone towards the crowd in a ‘sing up’ kind of fashion. No need, in fact she’d have been better off moving it closer to her own mouth.

In the middle of all this insanity, was a sliver of real life. To my right was another parent and earlier we’d had a practical ‘grown-up’ conversation about where’ve-you-come-from and routes back home. Amazingly, she’d driven all the way from Southampton for the gig, parked in Richmond and tubed it to Shepherd’s Bush. She had to do all that in reverse when the gig ended at around 10.30pm, and yes, tomorrow was a school day for her daughter.

As the evening progressed I found myself enjoying the gig not really for Billie and the music (although she was great) but more as a fly-on-the-wall observer. There was 30+ years between me and most of the audience and in some ways they felt like light years, as if I was some alien being who had undertaken interstellar travel to observe teenage human behaviour. The WHOLE of downstairs was a big tight pulsating mosh-pit. At times it looked dangerous and kids were being pulled out at the front, crushed, exhausted and perhaps dehydrated (the staff did a great job). If you needed the toilet you’d struggle to get OUT never mind get back in. A number of times Billie was encouraging the crowd to ‘open the pit’ – a process which involved the already rammed crowd downstairs pushing back from their centre to create a ‘hole’ in the middle. I thought Eilish was going to crowd surf into it at one point (although that would have been madness), but apparently the idea is that this big circular gap is created and maintained for a period until some musical cue signifies that everyone should now pile into it. The equivalent of pulling back an elastic band and letting go. 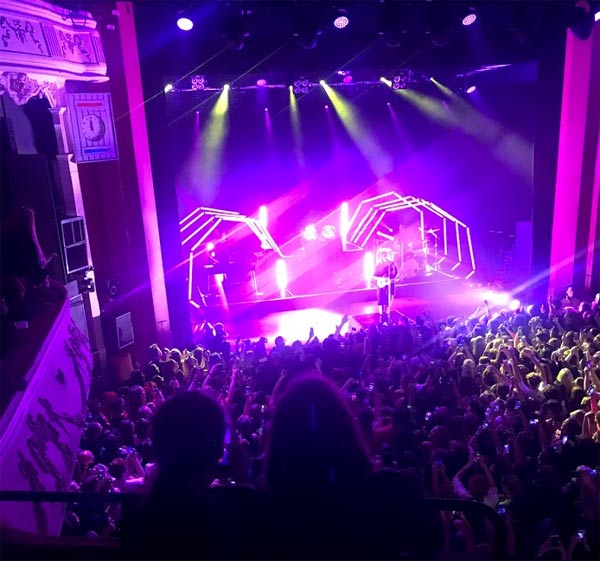 Later on (not sure why/how this happened) but a load of coloured glow sticks were thrown simultaneously onto the stage. One nearly hit young Billie in the eye, and while these weren’t Jelly Babies, I couldn’t help but think again about the Fab Four and wonder if this hysteria I was witnessing was similar to watching them perform in 1963 or 1964 (all screaming and not much else).

I go to more live music these days than I have ever done, and to a degree, I have been there, done that. I remember seeing Suede at Hammersmith Palais in 1995 when they were touring Dog Man Star with new guitarist Richard Oakes and being bruised, battered and exhilarated after 100 minutes of moshing near the front of the stage. But these days, being a bit of an old fart, the practical stuff matters. I’m lazy and can’t be bothered to travel too far (Southampton to London? You must be joking!), I do quite like a seat at a gig, easy access to the bar/toilets and of course bringing this back to Billie Eilish, I would quite like to hear the songs and the singer!

I can’t help reflecting how insanely hyped-up the whole crowd were. It’s not natural. What is it about Billie Eilish, specifically, that has created this madness? I don’t really have any answers; she’s fine, but I’m not sure that she’s once-in-a-lifetime exceptional. At only 17 Eilish is very young and when she’s touring, she’s at the centre of all this hysteria constantly. It can’t be good for you. At least she has her family around her.

Of course, my daughter and her friend absolutely LOVED the evening and were singing and dancing along constantly, in the space and safety of upstairs (Radio One DJ Nick Grimshaw was not far from where we were sitting). As she emptied my wallet at the merch stand on the way out, I reflected that this was an experience she will never forget. Hell, it’s an experience I don’t think I will ever forget. So, basically, job done. But next time I’m taking her to a-ha…

Paul and his daughter watched Billie Eilish at Shepherd’s Bush Empire on Monday 4 March. Thanks to John Macchia, the team at Interscope, and Billie’s management for supplying the tickets. Billie’s world tour continues and you can check out dates on her website.