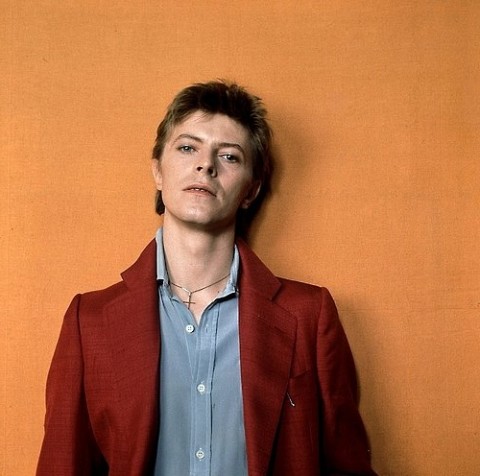 In the third part of a special feature, SDE Editor Paul Sinclair, reflects back to his earliest memories of hearing, buying and listening to the music of David Bowie. If you haven’t read part one (and two), we suggest you start here.

If you’re keeping up with the story… it’s the early nineties and I had just seen David Bowie play live for the first time, at the Milton Keynes Bowl on his Sound + Vision tour. That’s the one where he fibbed about playing his songs live ‘for the last time’ (Bowie loved a dramatic, but ultimately inaccurate grand statement).

Before we move forward to the next releases in his career, this is probably a good time to reflect back on my Bowie ‘education’. Remember, I’d taped his entire 1970s output on those TDK SA90s. It would be nearly 25 years before I became a music blogger, so at this point in time (I’m talking about the late 1980s) I was working as a trainee marine reinsurance claims broker, walking around Lloyds of London trying to look like I knew what I was doing (the ‘careers advisor’ at my school should have been sacked).

I didn’t live in London, but that was okay – l actually liked the commute, because I’d use the time to listen to whatever cassette tapes I’d put in my briefcase (yes, I had a briefcase) and I’d also smoke (don’t do it, kids), in what looking back on it, was a very grim concept – the ‘smokers’ carriage’ on the train (it was really disgusting). If you want to know how Bowie influenced I was, when I left home I even smoked French cigarettes Gitanes for a while, because that was the preferred brand of The Thin White Duke (in my defence I was 19). I did this until my housemates, who all smoked Silk Cut, B&H etc., complained about the smell (I kid you not).

ANYWAY… for a very intense period of time I was working through Bowie’s 1970’s albums and we’re up to the first of the so-called Berlin Trilogy, Low. I say ‘so-called’ because only Heroes was entirely recorded in Berlin. 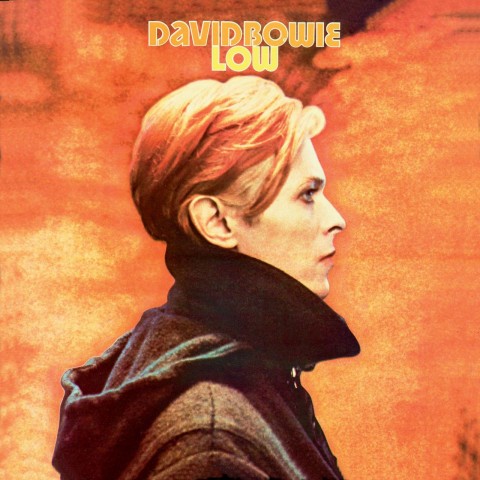 There was nothing to not like about Low. It had another fantastic front cover with a certain Mr Thomas Jerome Newton esq. again featuring on the sleeve, in profile (low profile, geddit?). Side one features so many great songs. Of course, it starts with the instrumental Speed of Life but Breaking Glass is a brilliant fusion of angular music and superb lyrics. Come on, “don’t look at the carpet, I drew something awful on it” – who else is going to write that line? The whole thing is fantastically realised but annoyingly short.

Sound and Vision is arguably, like Ashes to Ashes, one of the very best songs David ever recorded. It’s perfect. That 90-second intro is exquisite, ending with the girls and their ‘do duh do da dos’ and some signature Bowie sax. This could easily have been a very successful instrumental, but with a few great lines David adds another dimension to it and connects the music to the Low‘s themes of isolation and alienation. Structurally, like much of the album there is no regard for convention. The song has no middle eight, just two two-line verses, it starts with what you might call ‘the chorus’ and the intro is the same length as the rest of the track. Apparently the BBC used the music for promoting its output at the time which no doubt contributed to the song becoming a number 3 hit in the UK (supposedly Bowie was irritated at this, literally wanting to keep a ‘low’ profile).

Side 2 of Low was all instrumentals which was quite a radical thing to do, although let’s not forget, there are still two instrumentals on side 1 (Speed of Life, New Career in a New Town) putting the vocal tracks on the album in the minority.

Bowie’s work rate in the entire 1970s was phenomenal, but let’s pause a second to think about 1977. Low‘s follow-up Heroes was also released in 1977 and so were the two Iggy Pop albums that David Bowie co-wrote/produced, The Idiot and Lust For Life. You read that right, David Bowie was the creative force behind FOUR classic albums issued in 1977. It’s no wonder that 1978 would be the only year in the 1970s that he didn’t issue a studio album. 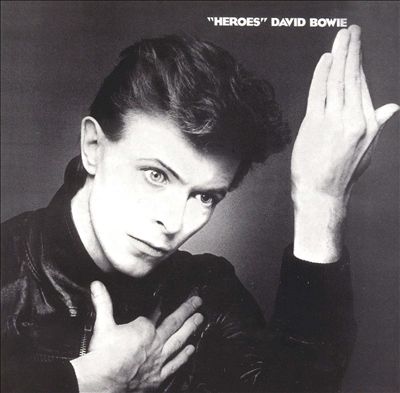 On to Heroes. I know the title track is a ‘classic’ but it’s a little bit to ‘wave-your-hands-in-the-air’ for me. I just cannot connect to that song. Maybe it’s the talk of dolphins or just because like M People/Heather Small with their bloody ‘Search For The Hero/Proud’ nonsense, it gets tagged on to every worthy bit of news footage or cause. Too much feel-good factor. Gimme V-2 Scheider or the get-me-to-the-doctor’s stream of consciousness that is Blackout over Heroes any day. The instrumentals on side two of the album are an obvious link it to Low. Sense of Doubt is a highlight although I think I prefer the instrumentals on Low. Having said that Heroes has a ace hidden up its sleeve – The Secret Life of Arabia. It’s as bonkers as everything else on the album but the production sounds wonderful. It’s also a refreshing palette cleanser after all the moody instrumentals that precede it. If you want me to recommend a Bowie ‘deep cut’, this is it.

So, scores on the doors…. SA90 number six has Low on side one and Heroes on side two. They will both have their champions, but for me it’s a relatively easy points victory for Low. Heroes is brilliant but rather unpredictable. An exhilarating, but bumpy ride. The songs are arguably more developed than on Low, but I’m going to use that word ‘immersive’ again. Low is more immersive. You can connect to the album and themes more easily. We’ve all drawn something awful on the carpet at some point, right? No? Well we’ve probably all known someone, somewhere along the line whose carpet we want to deface, let’s put it that way.  And with that lovely thought, time to move on…

In 1992, the news filtered through that David Bowie was working with Nile Rodgers again for the first time since Let’s Dance. This was indeed exciting news, although the first fruits of their labour – the Real Cool World single – was virtually ignored by media and public alike. It’s a forgotten song from a forgotten movie (all I need to say are the words “live-action/animated fantasy film” and you’ll know to avoid). Obviously, I bought the CD single which featured six remixes of that one song, but the release contained no other previews of tracks they might have been working on.

I have to admit I was a bit worried. This ‘comeback’ single (issued in August 1992) stalled at 53 in the UK charts and it was far from a classic. If this was the lead single from the new album, then ‘Houston’ we have a problem… 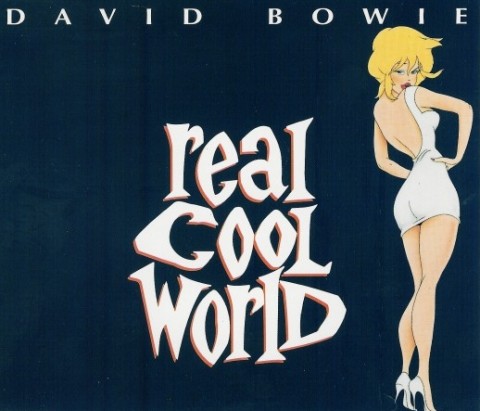 The Bowie single that time forgot

I reckon Bowie and Rodgers decided it was a bit shit, because it didn’t even end up on the album and just over six months later Jump They Say was the first single from Black Tie White Noise. It probably worked in David’s favour that most people were oblivious to the fact that he’d had a flop single out the year before!

Jump They Say got the full promotional push with two 12-inch singles, two CD singles, at least TEN remixes of the track and an expensive looking video. Bowie was also on the front cover of the single sleeve (not a cartoon lady), which helped. All this did the trick and Jump They Say was sprang into the charts, peaking at number nine in the UK, which was Bowie’s first top ten single success single Absolute Beginners in 1986. That seemed like a lifetime at the time, although it was only seven years! The next foray into the UK top ten singles chart would be 27 years later (Where Are They Now).

A favourite artist having a hit is a great feeling. You’re both proud of them for being clever enough to create a hit record and you enjoy basking in the I-told-you-he-was-good glory when everyone else starts buying it or listening to it. The album reached number one in the UK charts, something that wouldn’t happen again until 20 years later, when 2013’s The Next Day was issued.

I do like Black Tie White Noise, but it’s a little bit of a mish-mash if we’re honest. There were a couple more singles from it that did okay, but what was really exciting back in 1993 was that Bowie would release a second album that year, The Buddha of Suburbia.

Buddha was technically a soundtrack album, although only the title track appeared in the BBC TV series based on Hanif Kureishi’s book. This was a collaboration with the multi-instrumentalist Erdal Kızılçay (although all the songs were credited to Bowie alone). David had worked with Erdal on Never Let Me Down and Iggy Pop’s Blah Blah Blah and Nile Rodgers had used him for some demos when prepping for Let’s Dance, ten years earlier in 1983. He lived close to David in Switzerland at the time, so a multi-instrumentalist and local! (read this interesting SDE interview with Erdal)

The title track was beautifully evocative of Bowie’s past and indeed was self-referential with its “Zane, Zane, Zane, Ouvre le chien” outro taken from The Man Who Sold The World’s All The Madmen and *that* chord progression at 3.25. This song had a effective video too, with David walking around the streets of “south London” although anyone looking for high-budget production values would have been disappointed.

The album itself was pretty experimental in places but punctuated with some great songs such as Strangers When We Meet, which Bowie obviously held in high regard since he put a re-recording on his next album (Outside). Fans in America would have had to buy UK imports of the record, since it wasn’t issued in the US originally, adding to the feeling that it was all a bit ‘under the radar’.

Despite the quality and an embracing of what you might call his 1970s ‘values’, the album didn’t even make it into the top 75 and the single poked its head around the corner of the Top 40 before scuttling off into oblivion. Bowie was beginning a mid-nineties creative renaissance that would not be rewarded by big sales and high chart positions.

This was going to be a three-part piece of Bowie, but I’ve made some C-C-C-C-Changes to that plan and the final part, covering Lodger, Scary Monsters and Outside to Reality will be posted soon.