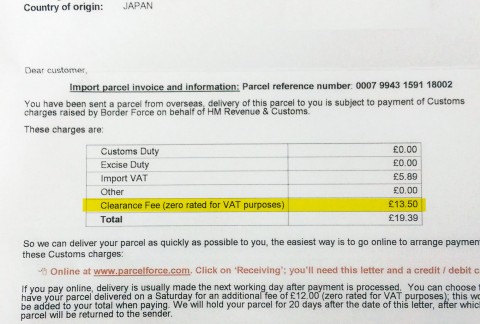 “Ever get the feeling you’ve been cheated?” – Parcelforce fees

Japanese music releases have always had a great appeal to collectors. There are many reasons for this, including the historical practise of adding ‘Japan-only’ bonus tracks, the sheer coolness of the OBI-strip, and the attention to detail when it comes to packaging (and often mastering).

Sometimes you would have no choice other than to buy the item from Japan, because the release was simply not available anywhere else. If you wanted any of A-ha‘s remixes on CD back in the eighties the only way to get them was to buy the unique Road Club and Scoundrel Club compilations.

Buying Japanese releases used to involve regular searches in Tower Records or trawling through magazine mail order listings, but thanks to the internet it’s rather easier these days to purchase more or less any title you are after, but – particularly in the UK – this expensive pastime hasn’t really got any cheaper thanks to ludicrous fees levied by delivery agents such as Royal Mail and Parcelforce.

As an example let’s look at a recent order I placed for the ZTT Sampled/Value of Entertainment CD+DVD set from CDJapan.

Next up was shipping costs. No, I didn’t want to pay nearly £12 for FedEx International Priority, but neither did I want to wait months for it to turn up on my doorstep, so I opted for EMS (Express Mail Service) which costs 1500 Yen, or £8.50. For those keeping count, so far this double disc set has cost me £27.

Call me a lawbreaker, but what happens next is you ‘hope’ you don’t get caught by Customs & Excise. Not because I’m not willing to pay the charges that HMRC require you to pay for importing the goods, but rather because you are automatically held to ransom by ‘administration’ or ‘clearance fees’ imposed by the company charged with delivering your goods in the UK. That is exactly what happened in this case.

10 days after ordering the item I received a letter (make that invoice) from Parcelforce informing me that my parcel is ‘subject to payment of Customs charges raised by Border Force on behalf of HM Revenues & Customs’. As you can see from the image above Customs Duty due is zero, Excise Duty due is zero and Import VAT is £5.89 (roughly about 20% of £27 allowing for fluctuation in exchange rate).

So now I’ve paid nearly £33 pounds for this item but here’s the killer: Parcelforce will not give me the item until I’ve not only paid the VAT, but also their ‘Clearance Fee’ of… wait for it… £13.50!

According to Parcelforce’s website these Clearance Fees are ‘to help cover the cost of additional handling, administration, collection of monies and provision of facilities for Customs clearance of packages’. Or to put it another way they’ve just plucked a (big) number out of thin air. Apparently if you don’t use EMS, this charge reduces to £8. In other words it’s a double whammy if you use EMS – it costs more for the actual postage and then if your item gets caught in customs your clearance fee goes up. So to update the running total, this CD+DVD set has now cost me over £46 to buy it from Japan. But wait, there is more….

Despite charging me a fee which is more than 200 percent of the VAT due, Parcelforce will not deliver the item on a Saturday. If I want that luxury it’s another £12!

So to summarise, if the item in question had not got stuck in customs it may have turned up at my house on a Saturday morning and total cost would have been £27. Because someone somewhere decided that Parcelforce (and Royal Mail) could charge astronomical fees for collecting VAT on their behalf, the same item to arrive on the same day via Parcelforce would cost me £58. £27 goes to CDJapan, the £5.89 to HMRC and £25.50 to Parcelforce for their fees.

This situation is ludicrous. There should be a simply and easy way to pay any VAT due in advance and you should be able to look forward to receiving your goods, promptly without having third parties holding your goods and demanding rates that would make a pay day lender blush. Suddenly those ‘import’ CDs I paid £23 pounds for in Tower Records in the mid nineties look like a bargain…