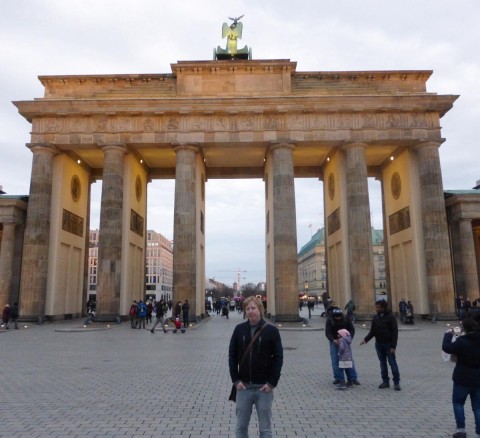 In the last of Paul’s diary pieces from Berlin, the SDE Editor drops in to say hello to a graphic designer who helps create super deluxe edition box sets, tries – and fails – to go shopping and then hits Schöneberg airport bar, before returning to Blighty…

It was another late night on Saturday, since after The Human League we sloped off to find somewhere to get a drink and ended up in a place called the Marquès, which has a restaurant on ground level (closed when we got there) and a great bookish bar downstairs in the basement. It was a superb ‘find’ – relaxing and quiet, with friendly table service and a fine atmosphere. We were automatically brought a glass of water each, without even asking and we enjoyed a few beers before heading back to the hotel.

On Sunday morning I had arranged to meet up with graphic designer Mychael Gerstenberger who lives and works in Berlin and whose biggest client is Bear Family Records, the German label who produce some great box sets and who are known to many of you, I suspect.

We were meeting with Mychael at the bottom of the U6 line (Alt-Mariendorf)  but of course, meeting people is always fraught with misunderstandings, especially if you don’t know what each other looks like (well, I didn’t know what Mychael looked like, at least).

I thought, for some reason, that Mychael was picking us up in his car so me and my friend Allan headed up from the station to ground level to look out for Mychael. I should say that after a mild but very wet Saturday, the temperature had dropped quite dramatically overnight, so after about 15 to 20 minutes hanging around, it started to feel very cold. Another 20 minutes past and we started having conversations along the line of “at what point do we given up and just go back?”. As we were on the verge of leaving, Mychael responded to one of my ‘where are you?’ emails to say that he’d been waiting on the platform for the last 20 minutes. D’oh! Apparently, Mychael told us later, if Germans are meeting at a station, they always meet on the platform, because there are often many exits. That makes sense, but so – we thought – did getting outside away from the crowds.

After that misunderstanding was behind us we headed towards Mychael’s studio, which had an impressive array of music box sets on shelves and on display, most of which Mychael had worked on. 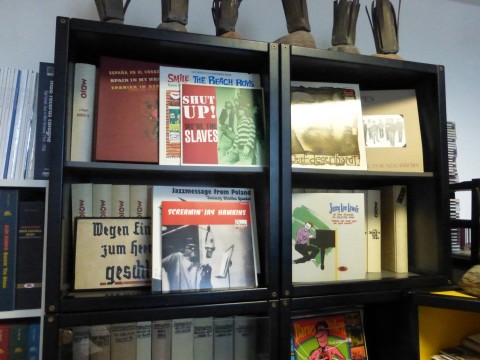 He also had a cool collection of old Macs, which he assured me were still working and sometimes still necessary to run legacy software. 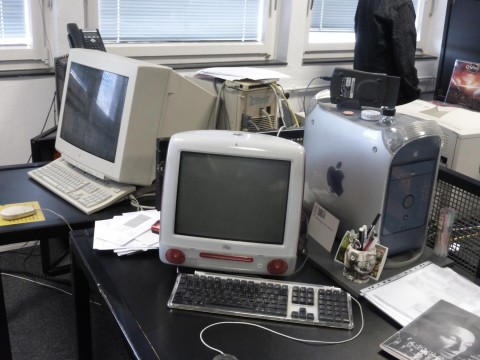 One of Mychael’s favourite box sets that he has worked on was the Chuck Berry Rock and Roll Music – Any Old Way You Choose it collection. The presentation of this 16CD set followed the Bear Family pattern of using jewel cases with inlays for the CDs and being in housed in a fairly big box to accommodate a large format book (in this case with a whooping 356 pages of content). I asked Mychael why he thought Bear Family stick with jewel cases which aren’t the most loved CD packaging every invented. Was it because it gives the fan the option to take them out and put them on the shelf?

Mychael: That’s one reason. I try to interest them in other formats, but they always come back to these. They just like to have separate volumes, where you can have chapters, or disc one and two in one package. And sometimes with different pictures on the front

The books always have a detailed discography, where every session is listed. Sometimes with the time they took for a lunch break, because they have access to union sheets! They also have labels pictured, recording information and the original record covers, sometimes various different versions. And really big and sometimes elaborate story in the liner notes.”

Bear Family still has the philosophy that we do these things for eternity. So you can still order order a box that came out 40 years ago, from them, and they regularly reprint stuff.

We also chatted about music retail and Germany and I mentioned how much I was impressed with Dussmann’s range of physical music (see Day One of the Berlin Diary).

Mychael: In general, record shops and book shops in Germany didn’t die out like in other countries, because of the laws. You have a fixed price for books, so Amazon is not really a competitor to any book shop. Most people in Germany use Amazon to research something and then they go to their bookshop, down the street, and say “I want to have this book” and they’ll have it the next day, at the same price. Also, when you buy something, like a vacuum cleaner, on Amazon Germany, if you also order a book at the same time, they can’t add postage for that, because of the laws. Books have to be delivered without added postage. That’s why bookshops, [although] they may be struggling, they don’t close one after another.

I found Mychael’s comments very interesting, because this law (read more about it here) unwittingly also supports record shops or retailers that sell records – i.e. bookshops! – in Germany. Because people aren’t so used to automatically shop online, they aren’t quite as likely to buy music online as someone in the UK, for example. Also, because a bookshop like Dussmann can survive and hopefully prosper – thanks to making decent margins on bestsellers – (not paper thin margins due to massive discounting), it means that they can continue to support physical music. It’s clear they have a passion and an inclination to do just this. 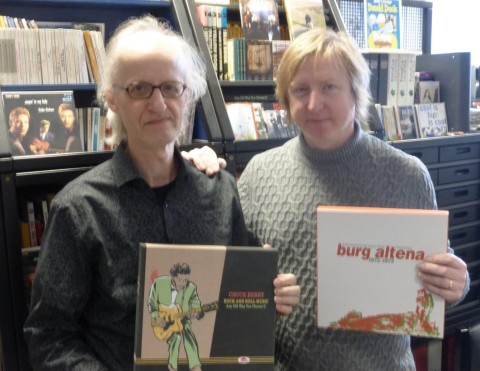 It was fascinating talking to Michael and seeing his place of work. I wanted to check out a good flea market, and he recommended one near Tiergarten station on
Straße des 17. Juni. Unfortunately, when we got there, we were greeted by empty streets and clearly no flea market in sight. I asked a nearby taxi driver what was going on and it seemed like there was some special reason that we weren’t aware of – a public holiday perhaps?

Speaking of which, Germans take Sundays very seriously and all the shops are shut, bar some very touristy, souvenir-type stores and the odd food outlet. Worth bearing in mind if you are thinking of doing a Saturday and Sunday in the city for some retail therapy. I was a little bit sad because there were still record shops I hadn’t managed to visit and I quite fancied popping back into Dussmann!

On a positive note, it was an opportunity to soak up some culture for the last few hours in Berlin. We visited the impressive Memorial To The Murdered Jews Of Europe, aka The Holocaust Memorial, and Brandenburg Gate at Pariser Platz, just around the corner.

After that, it was back to the hotel to pick up our bags and head to the airport. I stayed at the Tryp Berlin Mitte Hotel by the way, which worked out to be about £75 a night. I’d recommend it because it’s fairly groovy, very well located on the U6, and delivers virtually everything you need – safe in the room, cleanliness and room service. My only quibble is that the ‘free’ wi-fi is virtually unusable, because they deliberately restrict the speed. It’s €5 a day to upgrade to something decent.

Thank you Berlin!  You are a wonderful city and can’t wait to come back again soon. I feel like I’ve only scratched the surface. It was particularly nice to meet locals like Mark Reeder and Mychael and to be in Hansa Tonstudio 25 years to the day that U2‘s Achtung Baby was released – something I wish I’d known when we were there!

It was hard work (honestly!) but a lot of fun. I hope SDE readers have enjoyed the diary reports. Gimme your suggestions for 2017!