A year on from his ‘exploits’ in New York City, SDE Editor, Paul Sinclair, is in Berlin to go record shopping and meet up with a few interesting people… 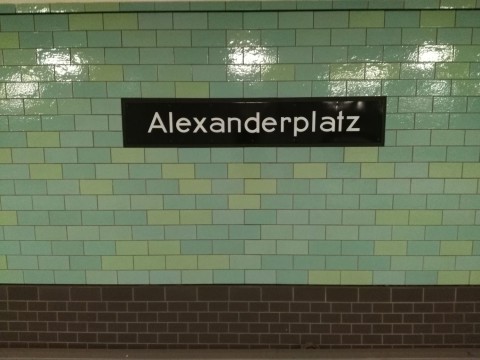 Day two was always going to be the ‘big’ day of this trip. The day which involved running around trying to see as many record shops as possible before sloping back to the hotel exhausted.

Over a coffee and croissant, early on, I tried to plan the day like a military operation to extract maximum value out of the time available, although there wasn’t much point hitting the road too early since many places weren’t open until 12pm. The tools for getting me there were the trusty underground map for the U-Bahn with names of shops scribbled on them and google maps. Once I arrived at the location and was up at street level, I’d then get out my phone and refer to google maps (where shops were ‘favourited’) to get me where I needed to go.

First port of call was Space Hall. This is located in Gneisenaustraße – a street in the district of Kreuzberg. It was the furtherest south but opened at 11am, so seemed a logical choice. 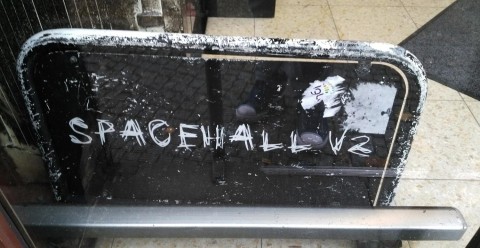 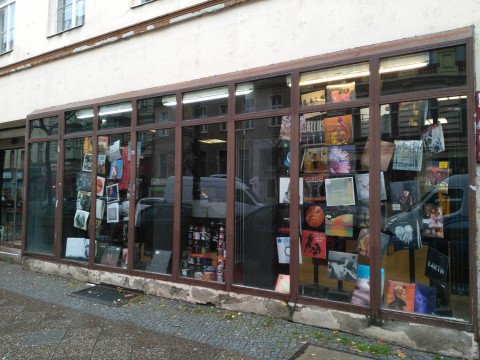 Space Hall has been going for over 20 years and is very large shop with a wide range of used an new vinyl and CDs. The A to Z section on used CDs was fairly extensive and prices weren’t bad, although probably a little bit pricey. I picked up the two-CD version of The Cardigans‘ Best Of which I’d been on the lookout for for a while – it was €19. Another purchase here was number two in The The‘s Cineola soundtracks, Moonbug. Lovely ‘book’ packaging. That was €20. 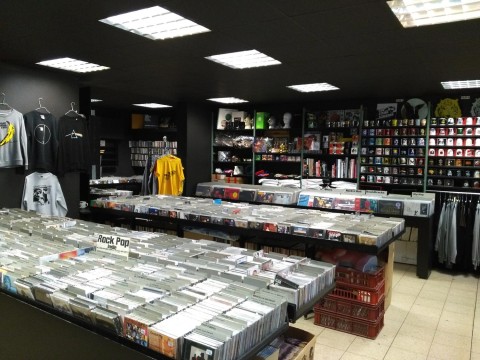 Space Hall’s CD section at the front of the store

The CDs are at the front of the shop, with the vinyl running up a massive space to the side. Stock was right up to date, since I noticed they had a sealed vinyl copy The Man Who Fell To Earth which was released that very day. 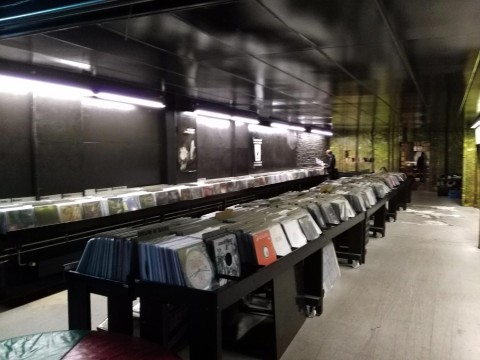 Space Hall has a massive area for looking at vinyl

At the back of this vinyl area was a door which led to another space, dedicated to hardcore techno vinyl. I gave this a miss. I did buy one vinyl record, because after rummaging through a few sales bins at near the counter I noticed a sealed copy of David Byrne and St Vincent‘s Love This Giant, which was only €16.

Next stop was Media Markt in the Alexa shopping centre in Alexander Platz. This is one of those massive electronic superstores that sells everything from hairdryers to TVs. This kind of shop would be unpromising in the UK as far as music is concerned but Media Markt has an absolutely enormous and extensive section for CDs and vinyl. 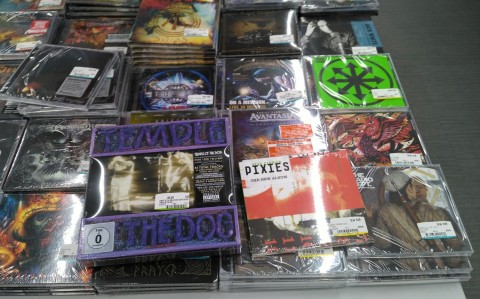 Media Markt had the Temple Of The Dog super deluxe

They had all the new releases, including the 2CD version of  R.E.M.’s Out Of Time (no super deluxe, though) and both vinyl variants of the same title. I spotted The Human League‘s A Very British Sythnesizer Group on vinyl as well. They had plenty of box sets, including relatively obscure things like the Temple Of The Dog super deluxe edition. What’s great about this shop is that while they did do the cheap ‘stack ’em high’ CDs this is combined that with proper music fan selections. I don’t think I have EVER seen a super audio CD ‘section’ in any music shop, but lo and behold, Media Markt have one! Right next to it is a blu-ray audio section. Amazing, really. 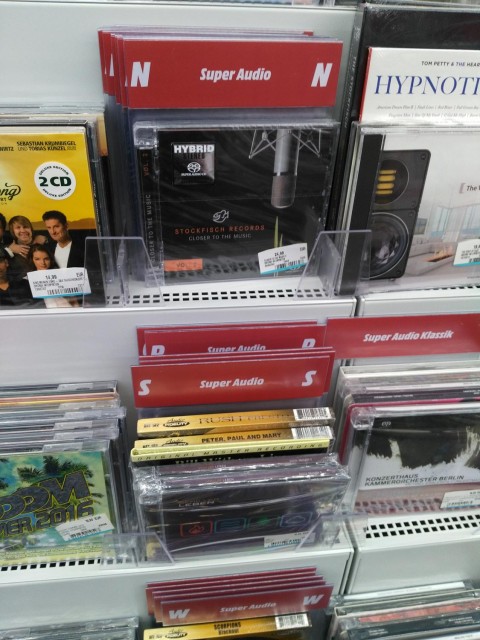 The vinyl section was absolutely enormous and as well as normal records, they had a box set area which had both album and seven-inch vinyl box sets, as well as seven-inch singles (they had all of the new ABBA picture discs for €9.99). 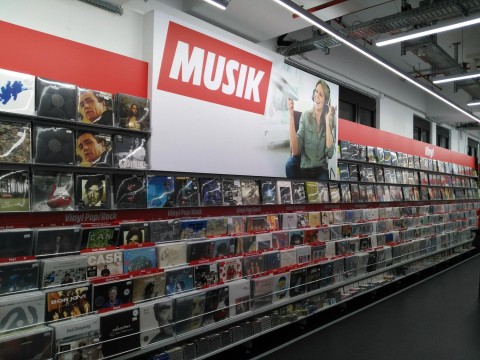 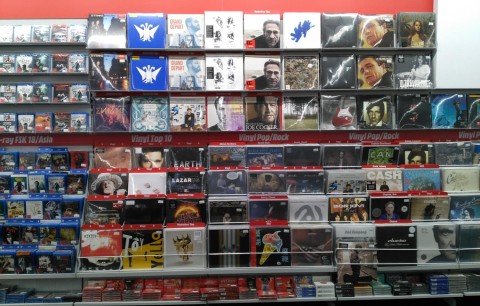 To give you an idea of prices I bought the Deram David Bowie deluxe edition for €6 and the deluxe edition of Queen Forever, since I’d given my copy to my mother! This was €5.90 which seemed very cheap.

Although it’s a bit of a sterile environment, I’d highly recommend checking out Media Markt for music if you’re in Berlin. 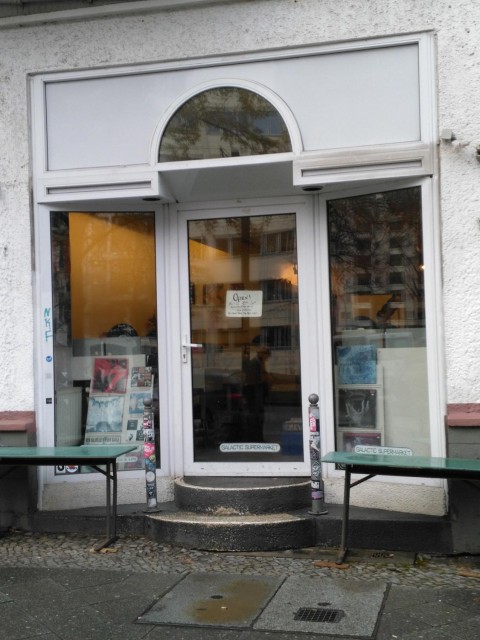 After this I boosted the energy levels with a visit to Curry Wurst and then it was on to  Galatic Supermarket which is near Frankfurter Tor, four stops down the U5 line. This is a secondhand vinyl shop (no CDs) and from the outside has to be the weirdest looking record shop I’ve seen, and not in a good way. 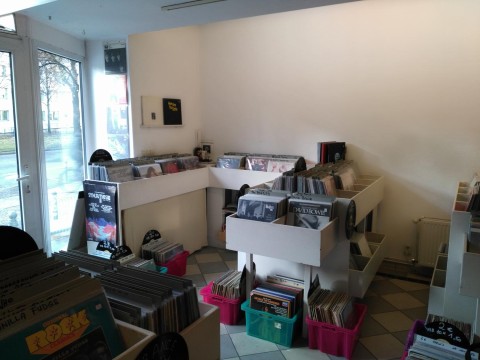 It’s a fairly small record shop, which has been open for around six years, with a good selection of used vinyl. Prices are a little bit high with not much below €7 or €8 regardless of rarity. I spotted a dutch pressing of Paul McCartney‘s Figure Of Eight 12-inch which was interesting because it includes the song Loveliest Thing. This song wasn’t issued on vinyl in the UK, so I was semi-tempted, but €12 for a 12-inch single seemed a bit steep. 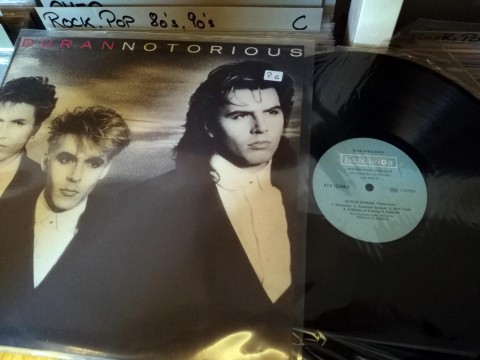 In the back area at the bottom was an ’80s rock and pop section where you could pick up a Bulgarian copy of Duran Duran‘s Notorious for €7.50 and they had two copies of the Frankie Goes To Hollywood Welcome To The Pleasuredome double picture disc set (€25 each). I saw an original of Lloyd Cole and the Commotions‘ Rattlesnakes which I nearly bought to go with my MOV reissue, but I’m fairly sure I have this at home and didn’t want to fall foul of the record obsessive’s curse of buying something you already have! 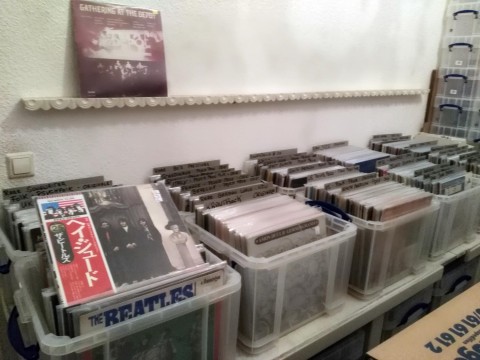 The ‘secret’ back room at Galatic Superstore

After chatting to the guy behind the counter he told me of some ‘special room’ at the back where they keep the expensive rarities, and “would I like a look?” Er, okay! So he asked me to leave my bag behind the counter and then went to the back of the shop and deftly moved some massive bit of chipboard to one side to reveal a small area which had sections with labels like: “MSFL – Audiophile – Orig” and “Rare Nineties Pressings”. There was a big Beatles section too, as you might expect with rare Japanese and US vinyl. I also spotted a cream coloured vinyl of Neil Young‘s Harvest (€60) 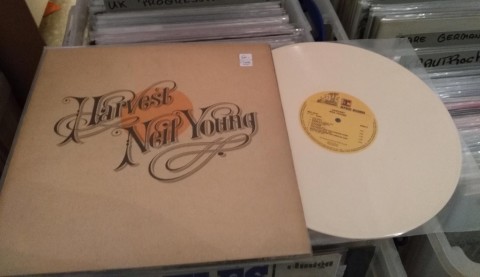 More Coming! This post will be updated with more on Friday’s events later today!