SDE Editor, Paul Sinclair, is in New York during Thanksgiving, Black Friday and Record Store Day. He’ll be checking out the best of what record stores are left in Manhattan, heading over to Brooklyn for more vinyl and CD exploration and talking to shop owners, and record buyers. Read about his adventures for the next few days in these exclusive diary posts…

Yesterday was something of a dress rehearsal, but today was fantastic because New York ‘woke up’ after the Thanksgiving holiday and everything was open!

An SDE reader (thanks Mark) had pointed out that there was a good record shop literally two minutes around the corner from my hotel in The Village and it was great that he did because I could easily have missed Disc-O-rama. For a start, the signage only works if you’re a giraffe, it’s far too high up with a big blank space below, and the window ‘display’ doesn’t scream ‘record shop’ with its references to Ticketmaster and the Lottery etc. Admittedly there is mention of DVDs and CDs, but it looks a bit like a newsagent from a distance. Anyway, it’s not a newsagent and it turned out to be a wonderful experience. The store has been open since 1975 which is amazing and once I’d introduced myself as a world famous music blogger (I’m joking) Manager Gloria Chan was charming and very helpful.

In fact, here’s the exciting bit, because I did my first Periscope ‘live broadcast’ from Disc-O-Rama yesterday morning. I have to say Periscope is brilliant and I really enjoyed showing those of you that tuned in around the shop and responding ‘live’ to the text comments that the audience can send. I don’t think there is a way to embed previous broadcasts on the web (as yet) so if you do want to watch a replay of the Disc-O-Rama Periscope then you’ll need to download the app onto your device and look for @sdediton. I’ve got a feeling the replays only stay live for 24 hours, so apologies if it has gone by the time you read this…

Disc-O-Rama was participating in Record Store Day and had a good selection in a locked cabinet on the shop floor. I bought the Say Say Say 12-inch, Bohemian Rhapsody, the Beck single and Phil Collins’ In The Air Tonight. 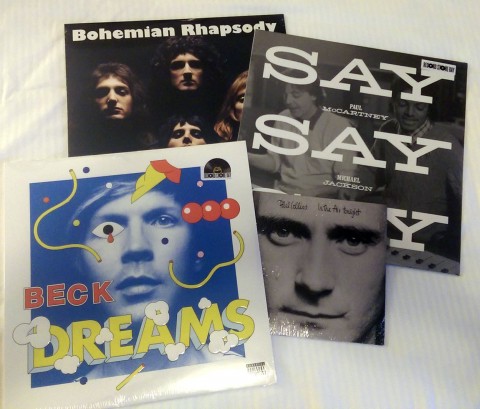 Incidentally, I can confirm that Say Say Say is a heavyweight clear vinyl pressing with inner sleeve and it comes with a download card, so you will get the hitherto unavailable remastered version of the instrumental remix of Say Say Say in a digital format. Predictably the download files are just MP3s.

Disc-O-Rama has a wide selection of used vinyl upstairs with lots of collectibles in various cabinets (including old RSD stock). I’d already bought my records and was all set to leave when I thought I’d have another ‘quick’ look down in the basement where I’d previously had a quick look for the Periscope video. A good hour later I emerged with a load more vinyl. They have a tremendous section of pop/dance 12-inches from the 1970s and ’80s so it was quite hard to leave! For example no one ever told me that Patti Austin covered Alison Moyet’s Honey For The Bees (I might have to go back to get that, because I listened to it on YouTube and it’s quite good). 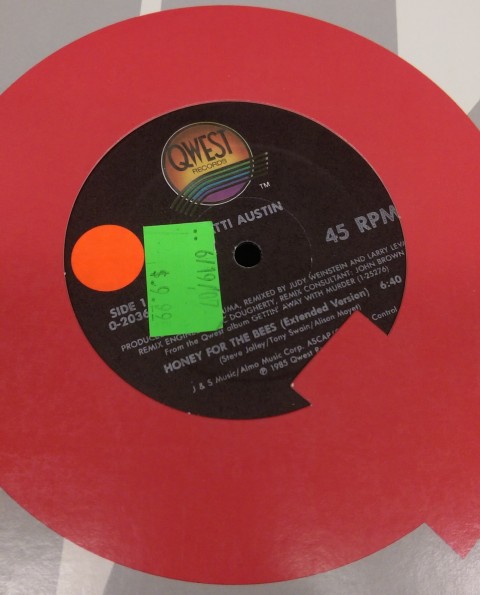 Patti Austin / Honey For The Bees 12″ in die-cut sleeve 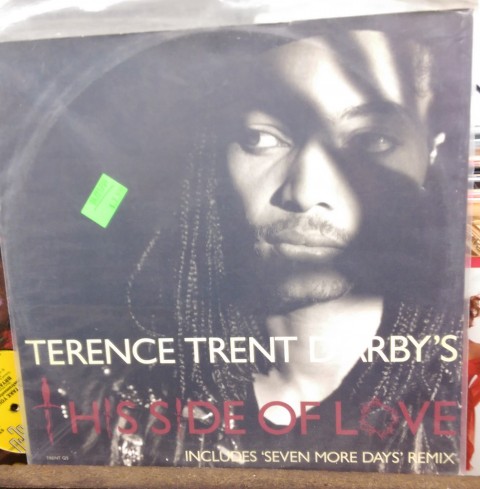 They had Terence Trent D’Arby‘s This Side of Love 12-inch with a different sleeve which I would probably have bought if the track listing had offered something unique and a Frankie Goes To Hollywood Two Tribes 12-inch with what was probably a rare ‘speech bubble’ sticker with Lenin proclaiming “Frankie Is The Most Important Thing In The World!”.

I DID buy a sealed Deborah Harry 12-inch of Sweet and Low which has five versions of the song, a 12-inch promo of the Eurythmics‘ I Need A Man (which boasts an alternate cover and includes a rare edit), a 12-inch of Thomas Dolby‘s Hot Sauce, a vinyl copy of the She’s Having A Baby soundtrack (complete with Kate Bush‘s This Women’s Work) and a promo 12-inch of Duran Duran‘s Electric Barbarella (featuring All Fired Up Mix and Bonus Beats and edit). 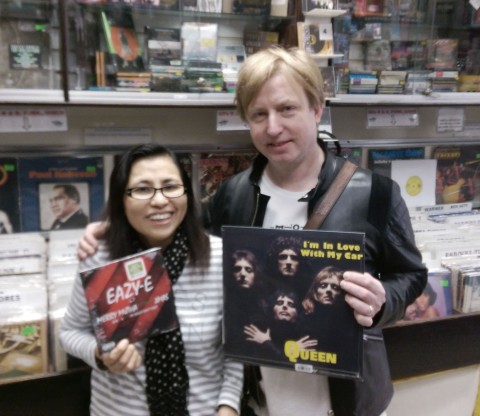 Me and Disc-O-Rama manager Gloria Chan (I don’t know why she’s holding up Eazy-E!)

I’d been in Disc-O-Rama for ages, so time to head off somewhere else. To Bleecker Street Records actually which confusingly is no longer in Bleecker Street, having relocated to West 4th Street a couple of years back. Disc-O-Rama had been very quiet but BSR, as I will refer to them from now on, was bigger and busier. Only a bit though, and one observation from today is that the Black Friday Record Store Day isn’t anything like the one in April. No queues, no mad panic to grab the rarity you are after. It’s very easy to pick up anything on the RSD list. It’s also interesting to note that bootleg recordings are prevalent in secondhand record shops in New York. I personally find it quite tedious when looking at used CDs having to flick through masses of these ‘unofficial’ releases with their dodgy artwork, but it’s a miracle that half these shops are still here, so I guess no one is bothered about ‘clamping down’ on such activity! 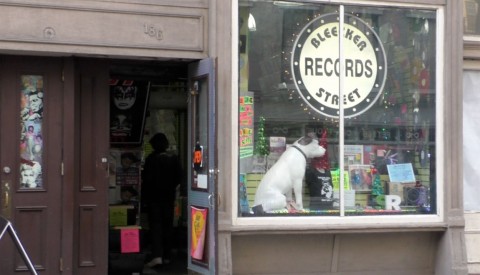 I’ll be honest and say BSR didn’t do it for me. It’s hard to articulate, why but I didn’t like the vibe of the place too much, the prices for used CDs were very high and although the owner let me film a Periscope video (not as good as the one I did earlier in the day) he wasn’t the friendliest. They did have all their Record Store Day stock out and had a wider selection that Disc-O-Rama, but it was pricier. The Say Say Say 12-inch was two or three dollars more, for example. I still bought a couple of records though: The Cardigans’ Long Gone Before Daylight reissue (a favourite album of mine – no, I don’t have the SACD!) and the Falco Rock Me Amadeus coloured vinyl seven-inch.

The highlight of the day was popping around the corner to the unassuming Record Runner. 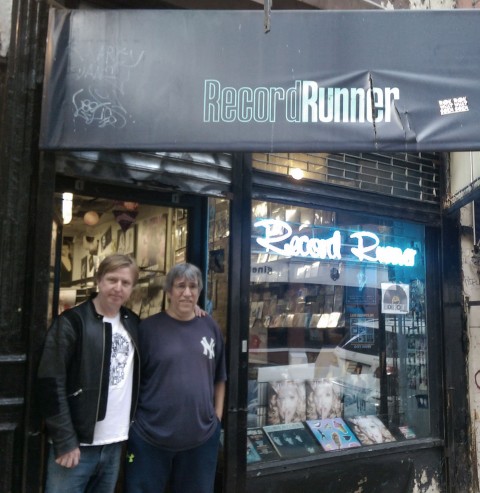 I loved this place, since it specialised in 1980s pop, and in particular Duran Duran, a-ha, Tears For Fears, Madonna etc. Luckily (for me) it was very quiet because I chatted to owner John Pita for at least an hour about music. He has run the shop for 37 years and did a brisk trade in the early years selling British and Japanese imports. He was a very early champion of Duran Duran and some of the staff went out with the three Taylors in the very early years when no one knew who Duran Duran were. There is still loads of really interesting stock in the shop and John offered to go ‘out the back’ and bring out even more Duran Duran rarities (the shop is relatively small). 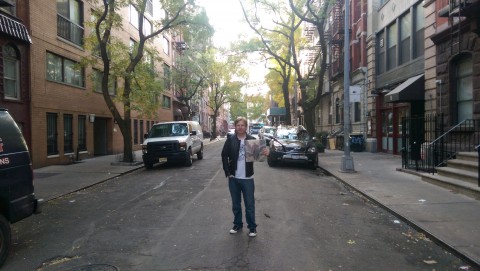 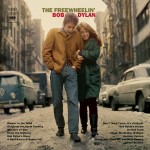 Record Runner is located on Greeenwich Village’s Jones Street, location of the famous cover shot of The Freewheelin’ Bob Dylan. I have no shame, so when John offered to take my photo posing with album cover in hand, in more or less the exact location that Bob and his girlfriend Suze Rotolo were standing, I wasn’t going to say no!

The shop is very much part of the community and David who now runs the Rebel Rebel record shop used to work there. As did Lori Majewski, who went on to co-write that Mad World book. 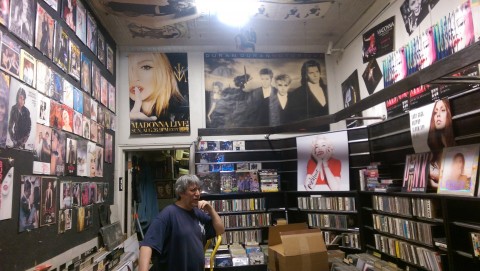 I said goodbye to John and by this time I was famished since it was mid-afternoon and I’d not eaten since breakfast. That would be it for independent record stores for one day, but lots more to see tomorrow.

Later, I would stop off at Barnes & Noble on Union Square just to see what music they carried. The shop is similar to the old Borders and they have a reasonable selection of CDs and vinyl, including some exclusive McCartney vinyl editions of the Tug of War and Pipes of Peace reissues that come with seven-inch singles. I wasn’t tempted, but did pick up a couple of those Disney Legacy editions (Toy Story and Mary Poppins) which form part of the Legacy Collection box set and Neko Case‘s Blacklisted on orange vinyl.

Check back tomorrow for day four of my New York diary.