Although we are lucky enough to get sent some music releases for review, you still can’t beat the going-into-a-record-shop-and-buying-a-record experience.

With the decline of independent record stores, and the near obliteration of the big chains (at the time of writing HMV in the UK is closing a massive amount of shops, and its future looks far from bright) we are finding that charity (or thrift) shops are becoming excellent places to find rare, or interesting releases and generally very cheap prices.

So in the first of a new monthly feature, Second Hand News will give you a little insight into the ‘new arrivals’ into the SuperDeluxeEdition used record collection. Second hand items that have caught our eye and resulted in a purchase and a bounce in our step as we head back to SDE HQ and look forward to listening to the items in question. 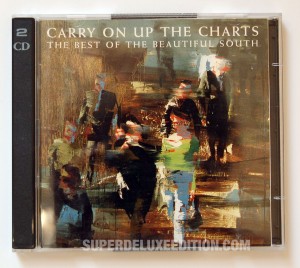 The ‘2CD’ at top right should be the giveaway that explains why we pounced on this 1994 hits collection from The Beautiful South. This was a limited edition that contained 14 B-sides on a bonus disc in addition to the standard 14-track CD. Having appreciated Cherry Red’s recent two-CD reissues of The Blow Monkeys’ first two albums, this single from Limping For A Generation with its pop-art sleeve was always going to be coming home with us when spotted for £1. The B-side is a live version of Waiting For Mr Moonlight which is on the reissue. 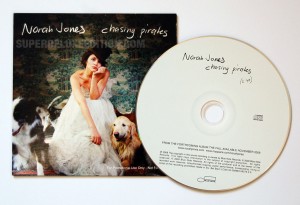 Another used find that happened to co-incide with a major new reissue. We really enjoyed Analogue Productions’ Norah Jones audiophile vinyl box set, so this one track promo CD, containing Chasing Pirates from her album The Fall, was a no-brainer. It’s a superb track, and the vinyl album from AP comes with a Norah/doggie poster that probably should be banned from sale…

If we see CDs from the eighties pressed in West Germany going cheap, they normally get bought, especially if they are from Vertigo with their ‘swirly’ disc design. This Thin Lizzy greatest hits dates from an age when compilations would be happy with only 11 tracks on them. No filler, just (Lizzy) killers. A UK CD single from Prince‘s patchy Emancipation triple album, this Betcha By Golly Wow! package comes with a poster and a digipack CD, both of which are housed in the orange slipcase. There is only one other track on the CD, but it is one of the better songs from the album, Right Back Here In My Arms. 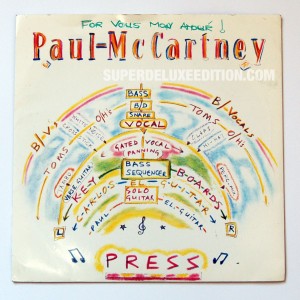 People might laugh at ‘the frog chorus’ (We All Stand Together) but it was another massive hit for Paul McCartney in 1984. Just like the three singles that preceded it (Say Say Say, Pipes Of Peace, and No More Lonely Nights) it went top three in the UK. Press, the next 45, which came out in July 1986, peaked at only number 25 and Macca had officially lost his commercial midas touch. The scribble on the sleeve of this single tells its own story (“For Vous Mon Amour!”) but this was purchased because the vinyl was in mint condition and it has the unremixed ‘short’ version of B-side It’s Not True which hasn’t appeared on CD in over 25 years. 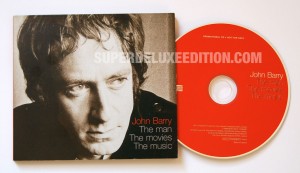 Finding unique promo compilations is something of a holy grail for the record hunter, so we were really pleased to come across this 17-track CD of music from our favourite movie theme composer, John Barry. The CD was created for the 1999 Music Industry Trusts’ Dinner in aid of the BRIT trust and Nordoff-Robbins Music Therapy, and was presumably given to attendees during that evening. The selection starts with Hit And Miss from 1960 and takes in some of Barry’s best work such as Goldfinger, Midnight Cowboy, Born Free, Out Of Africa and The John Dunbar Theme from Dances With Wolves. 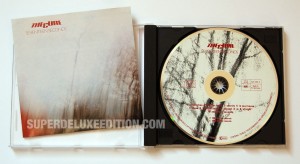 Another eighties CD pressed in West Germany, The Cure‘s Seventeen Seconds contains Play For Today and the seminal A Forest. The disc claims “ADD” but the back states “AAD”… 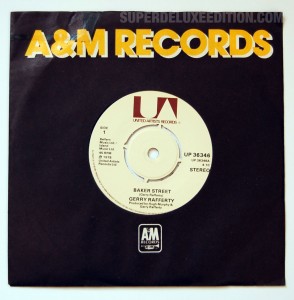 A 35 year old single in absolutely MINT condition should never be ignored, especially this classic from Gerry Rafferty. B-side is Big Change In The Weather. 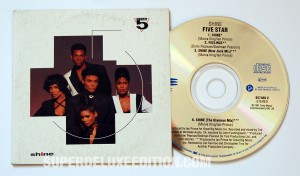 Cherry Red have recently reissued the Five Star album from which this single is taken (along with a remix anthology) but the Shine album was only ever released in the US. This single does has ‘Promotion Only Not For Sale’ stamped on the back but it was definitely released commercially and subsequently failed to chart, which is why Epic declined to release the album. The reissue contains ‘The Glamour Mix’ found here, but only an edit of the ‘New Jack Mix’ which is also on this CD. The other two tracks are Shine (single/album version) and Feelings which appeared on the previous album. 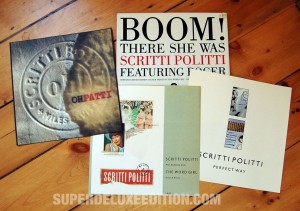 Scritti Politti / Boom! There She Was boxed twelve-inch single (1988)

Bought not for the ‘Sonic Property Mix’ of the title track, but rather for the amazingly lovely set of colour prints of The Word Girl, Perfect Way and Oh Patti sleeves. They will soon be framed and on the SDE office wall. Not bad for 99p!