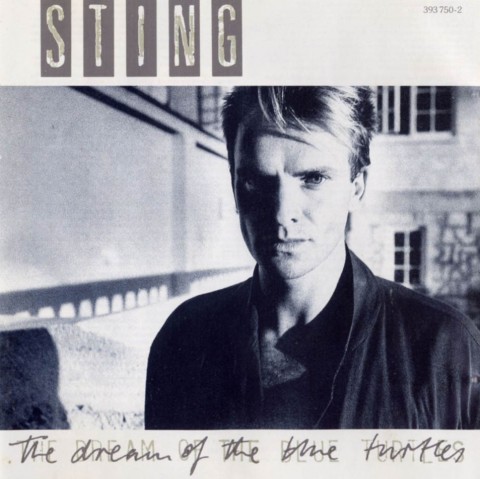 Sting’s debut solo album The Dream of the Blue Turtles turned 30 this week and while I’d love to bring you news of an expanded deluxe edition, I’m afraid it’s not happening. At least not yet. Of course this won’t be the first time the opportunity to issue an anniversary edition of an album full of Gordon Sumner songs has been and gone…

All five Police albums are now over 30 years old none of them have ever been reissued and expanded with bonus tracks and Sting’s apparent disinterest in archival projects appears to carry over to his solo work.

This is such a pity, because he has put out some fine albums over the years, and barely put a foot wrong in the 1980s. It was also an era that saw a multitude of singles, b-sides, and remixes all of which deserve to sit alongside albums within deluxe sets.

The Dream of the Blue Turtles opitimises this with A&M managing to squeeze SEVEN singles from the 10-track album (if you count the Japanese release of Shadows In The Rain). There were at least four period non-album versions of first 45 If You Love Somebody Set Them Free, including a Jellybean extended ‘dance’ version, a William Orbit ‘Torch Song’ mix and a three minute edit unique to Argentina. None of these have been issued on CD, with the exception of the Jellybean dance mix which turned up on the 1990 CD single of the Ben Liebrand Mix of Englishman In New York.

If you wanted to include 1994 remixes of this track with ‘your’ deluxe (not sure I would…) you can find a least a further five versions including a ten minute ‘A Brothers In Rhythm Soundtrack’ remix. If You Love Somebody Set Them Free had a non-album B-side called Another Day, so one single in and we’ve got potentially TEN tracks for inclusion in a deluxe set! 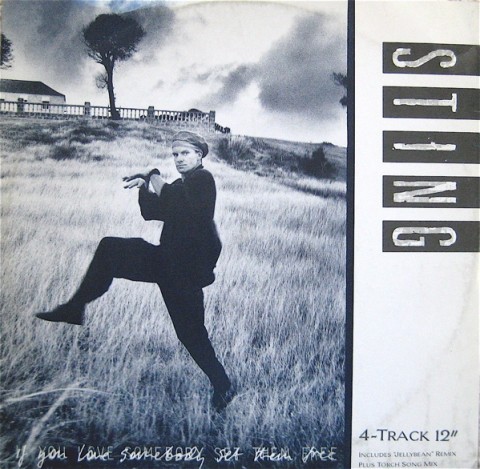 Similarly, the follow-up, Love Is The Seventh Wave, was remixed for both seven-inch and twelve-inch backed with a live version of Consider Me Gone.

Russians and Moon Over Bourbon Street both had new B-sides (Gabriel’s Message and The Ballad of Mack The Knife, respectively) and the former was issued in Australia as a ‘Special Tour Souvenir’ seven-inch double-pack which included a Night Mix Medley which was audio taken from Bring On The Night (this also appeared on the Japanese 12″ of Shadows in the Rain). 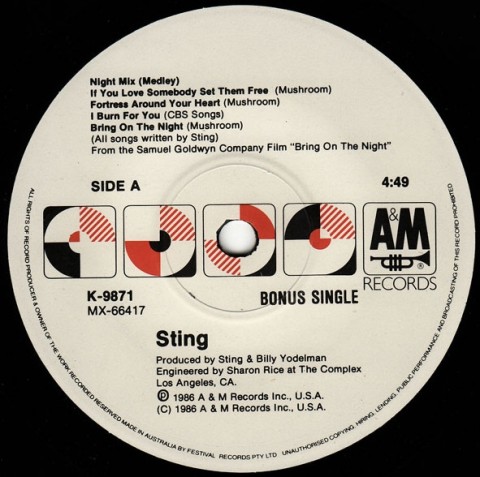 This live medley on an Australian release

Fortress Around Your Heart didn’t really offer up any new material when released at the time, but Hugh Padgham did remix it for the When We Dance single in 1994 so that is certainly worthy of inclusion.

While we’re ‘in’ the early nineties, one of my favourites from Dream of the Blue Turtles, We Work The Black Seam – a single in Germany – was completely re-recorded in 1993. This is a classic example of a fantastic Sting rarity that’s all but obscured by the passing decades and the fact that it was hard enough to find at the time! We Work The Black Seam (1993) only ever appeared in two places: the B-side of the UK seven-inch of Fields of Gold and on the US CD single of If I Ever Lose My Faith In You. It didn’t even have the ‘1993’ suffix on the UK release! Anyway, that is certainly worth including even if we are time-shifting a little bit.

Finally, five tracks from The Dream Of The Blue Turtles were remixed for Sting’s 25 Years 4-disc anthology that was issued in 2011 (photos here). The box was a fantastic missed opportunity, since it was largely just an inflated greatest hits with virtually nothing in the way of rarities, but these remixed tracks are an exception. All five should be included on a deluxe Blue Turtles, but hey, since there is only ten tracks on the album, why not ‘finish’ it off and have a completely remixed version as a bonus disc?

Sting is an artist that clearly likes to look forward (Don’t Stand So Close to Me ’86 not withstanding). The anthologies that have been issued for both The Police (Message in a Box) and his solo work (25 Years) have offered virtually nothing for die-hard fans and surely it’s about time someone persuaded him to loosen up and offer up some goodies via expanded editions of his long-players. Deluxe reissues are an opportunity to celebrate after all and Sting has created a superb body of work over the last 30 years or so. Not wishing to issue scratchy guitar demos is one thing, but leaving b-sides, remixes, alternate versions, and live performances exclusive to old vinyl and CD singles and is bordering on the perverse.

Anyway, if you’d like to see a deluxe edition of The Dream of the Blue Turtles, leave a comment encouraging Sting and his management to get on with it. In the meantime here is what an SDE deluxe of the album might look like. Obviously you could add 5.1, and videos and perhaps even combine with Bring On The Night for a Super Deluxe Edition!

Disc 3 – Dream of the Blue Turtles (2011 remixes, with the other tracks remixed to complete the album)