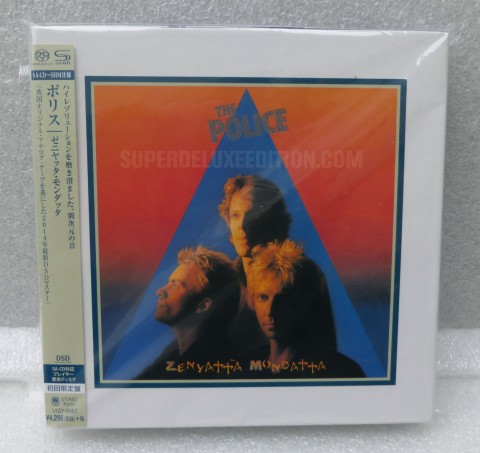 Universal Music Japan have been strong supporters of the Super Audio CD format for many years now. While in Europe blu-ray audio is starting to dominate the hi-res end of the market – and has arguably become the audiophile format of choice for rock/pop fans – out in the Far East there is still an enthusiasm for the DSD (Direct-Stream Digital) mastered SACDs.

In the last 18 months or so the packaging and presentation of these releases (which tend to come in small ‘waves’) has changed significantly. A few years back, the SHM (super high material) SACDs came in a slightly awkward eight-panel gatefold package which was a rather awkward Brundefly fusion of mini-LP CD (vinyl replica) packaging and something more conventional. In terms of presentation it didn’t really work, although that didn’t affect the sound of the discs many of which were superb.

The Japanese SHM-SACD releases have had a revamp and since 2013 have come in a totally new style of packaging. A bespoke rigid-board outer box now contains a high quality vinyl replica which sits inside the box. The outer boxes have album cover art pasted onto the front via a label which wraps around the spine and encroaches onto the rear of the package. 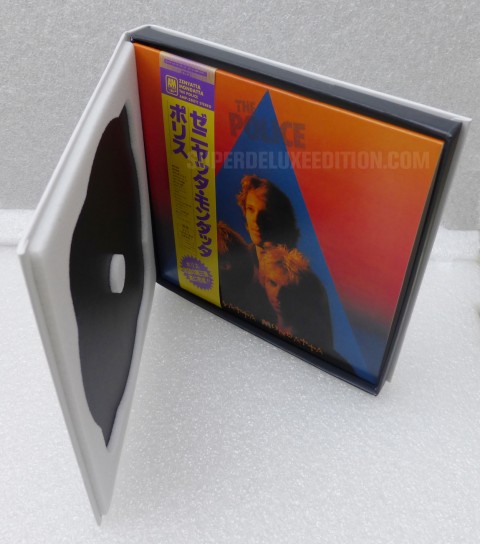 Inside the outer box resides a fully functioning mini-LP CD

When you buy these, the disc (in a protective sleeve) actually sits separately behind the vinyl replica jacket. The inside front cover of the outer box actually has a place with foam surround where you can also ‘seat’ your disc, although that does mean taking the disc out of its cover so I can’t see too many people choosing to do this.

The vinyl replica mini-LP CDs have the usual high quality presentation complete with OBI strips (replicating original design), inner sleeve recreation, and booklet with Japanese notes and normally English lyrics. A second OBI-type strip actually wraps around the entire rear of the outer box and enthuses (in Japanese) about the benefits of SHM/SACD/DSD. 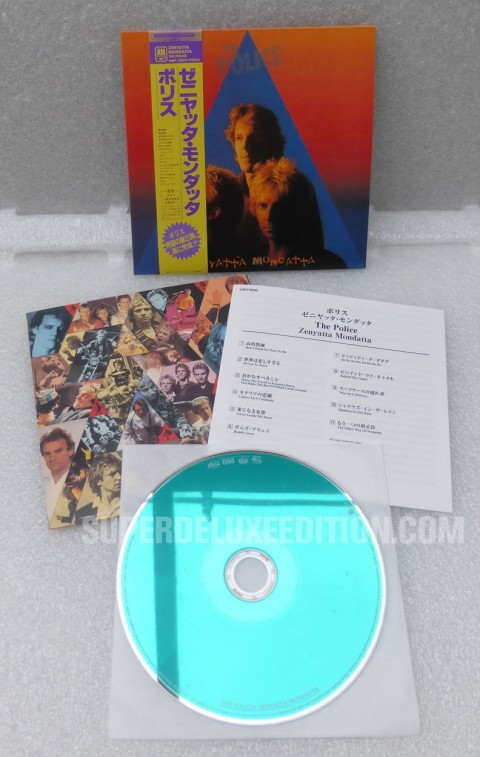 I’ll be focussing on various SHM-SACD titles over the next few weeks but the first one up for examination is The Police‘s 1980 album Zenyatta Mondatta, and I found it had a lot going for it. Despite a hefty price tag of around £25 (that’s before the cost of importing and often much more via Amazon resellers), if ultimate audio quality is your goal – and/or you are a big enough fan of the artist – then it is undoubtedly worth investigation. The other thing to bear in mind is that the low print runs of these discs ensure they virtually never depreciate. You are always likely to be able to sell on at a decent price in the future, assuming you keep the item in great condition – there aren’t too many CDs you can say that about these days.

As someone who also owns the 30th anniversary Police Japanese reissues (complete with rather swish Reggatta de Blanc Disk Union promo box)  a comparison quickly confirms that the new SHM-SACD is significantly better; far less harsh, smoother with that analogue warmth that is totally lacking on the earlier disc. In fact I dug out my Message In A Box set for further comparison and that had a similarly loud mastering (perhaps even worse). The guitar during the chorus of Driven To Tears feels far too ‘up front’ and the various instrumentation seeming to compete with each other in a way that simple doesn’t exist on the SACD, which seems to give more ‘space’ to the individual elements and encourages you to crank up the volume. 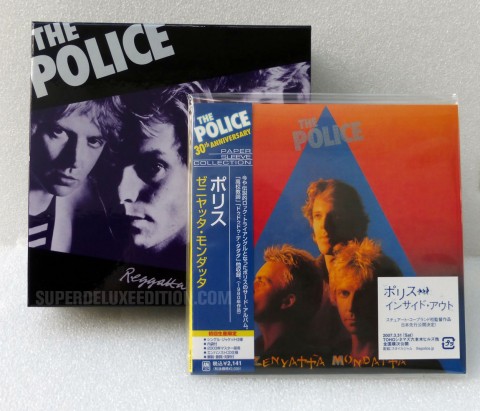 Rather like a crystal decanter, or heated leather seats in your automobile, the SACD is certainly an indulgence, especially since this has no ‘red book’ CD layer (in other words it will only work on SACD players) meaning you’re ‘locked’ into only playing it on your ‘main’ system. If that sounds too restricting, the good news is you can purchase an SHM-CD (compatible with all CD players) that shares the same mastering and therefore should still sound great. The SHM-CD version of The Rolling Stones’ Sticky Fingers released last year bears out that much of the listening pleasure is down to the quality inherent in the new mastering with the ‘super audio’ element of the CD perhaps a secondary factor – although obviously that will still make a difference. For the record, the booklet for this new release declares “DSD flat transferred from UK original analogue master tape by Richard Whittaker at FX Copyroom, London, in 2014.”

Incidentally, if you think I’ll automatically rubber-stamp any of these SHM-SACDs that is not the case. The sound of Tears For Fears‘ Songs From The Big Chair on SHM-SACD is actually quite disappointing – Shout in particular has virtually no bottom end and is really very thin. This perhaps suggests that a ‘flat transfer’ isn’t always the be-all and end-all.

Anyway, back to The Police – if you want a decent sounding Zeyatta Mondatta on a budget then the original A+M CDs still have a lot going for them. If you have some disposable income burning a hole in your wallet and simple want the best digital sounding version of the record then you have reached your destination with the SHM-SACD (or SHM-CD). The CD variant is available in ‘platinum’ and non-platinum versions and they both have the full-blooded mini-LP CD packaging but the platinum shares the outer box that comes with the SACD which might account for the price differential.

In summary, I’m as sceptical as the next man when it comes to SHM, ‘platinum’, blu-spec CD2 etc., but I know a well mastered album when I hear it. Whichever variant of this new 2014 reissue of Zenyatta Mondatta you plump for I don’t think you’ll be disappointed.

Look out for more features on Japanese SHM-SACD/CD releases in the coming weeks.