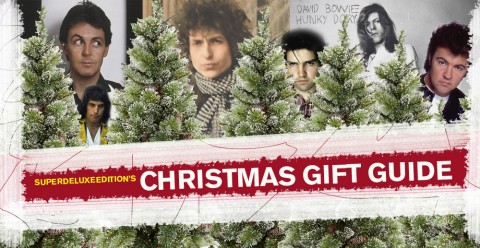 STILL SEEKING THE PERFECT PRESENT for family or friends? Got a bit of spare cash to treat yourself (Go on, you deserve it…)? Or just belatedly writing your letter to Santa? Get inspired as Justyn Barnespresents an SDE-curated array of box sets and deluxe editions that won’t disappoint… 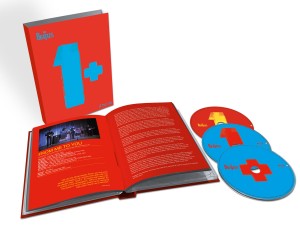 You’re not going to go too far wrong with some festive fab four action. Spit and polish has been applied to the rebooted 1 compilation and fans can now enjoy 27 pristine videos via DVD or Blu-ray complete with 5.1 surround sound (remixed by the son of the ‘fifth Beatle’, Giles Martin). Moptop fanatics can go one better and opt for the 1+ deluxe edition which adds an extensive booklet and a further 23 promos including ‘alternate’ versions of favourites like Hello Goodbye and Hey Jude. A splendid time is guaranteed for all. 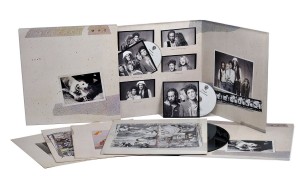 Give a Mac fanatic the horn (sorry…) by bestowing upon them Rhino’s huge eight-disc super deluxe reissue of the 1979 album Tusk. Enjoy the original album on the first CD, then explore, among other things, 12 previously unreleased early versions on disc two, with an alternate version of the complete album consisting of session outtakes on disc three. Two further CDs deliver 22 unreleased performances from the 1979 Tusk tour. Topped off with the original album on 2LP vinyl, a 5.1 surround mix of Tusk on DVD, and a booklet featuring new interviews with band members and extended notes, total Tusk immersion is guaranteed. 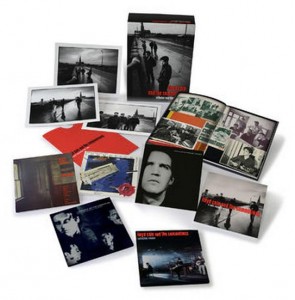 Even diehards who own the original albums will appreciate the remastered versions of Rattlesnakes, Easy Pieces and Mainstream in Collected Recordings 1983-1989 which are touted as the ‘best sounding versions ever available’. The other three discs in this six-CD set are notable for the 18 demos and rarities (including six unheard tracks) and a DVD with videos of eight TV appearances on Top of the Pops, The Old Grey Whistle Test and co. And for the uninitiated, a 48-page hardback book by Peter Paphides (journalist, broadcaster and, indeed, husband of Caitlin Moran) tells the background story of the band.

The first in a planned series David Bowie ‘years’ anthologies (‘Golden Years’ is our bet for the next set), this is a belter. Available as either a 12-CD or 13-LP box set, it features Bowie’s six studio albums from 1969’s David Bowie / Space Oddity all the way to 1973’s PinUps. Between those two, The Dame released some of the greatest rock/pop albums ever made including Hunky Dory and Ziggy Stardust. Re:Call 1, a two-disc compilation of non-album singles, single versions and B-sides from 1968-73, an alternate mix of Ziggy Stardust, plus two live albums – Live Santa Monica ’72 and Ziggy Stardust: The Motion Picture Soundtrack – complete the audio extravaganza. Most of the albums have been remastered and with classy Japanese-style packaging of the CDs and a lavish accompanying book (128 pages in the CD box, 84 pages in the vinyl) to dip into, no Bowie disciple will complain about heaving this weighty set from under the Christmas tree. Best of the CD box is under £70 now on Amazon UK. 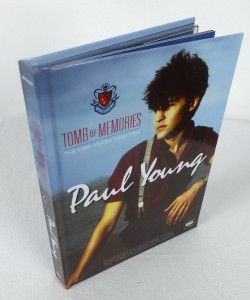 This collection is brilliant, absolutely brilliant, and has undoubtedly the most beautifully judged track listing in the history of box sets… as I’m contractually obliged to write because it was compiled (with a little help from Paul Young himself) by SDE’s very own esteemed editor, Mr Paul Sinclair. Seriously, though, this four-CD, 64-song bookset will delight Young loyalists with a potent cocktail of hit singles, rarities, previously unheard songs, alternate mixes, live recordings and more. Among many highlights are Coralie – from the Other Voices album sessions – mixed from multi-track tapes especially for this collection, an unreleased solo version (minus Paul Carrack who sang on the original) of Crowded House cover Don’t Dream It’s Over and an unplugged acoustic rendition of Young’s 1983 number one hit Wherever I Lay My Hat (That’s My Home) recorded in 1994 at Abbey Road. 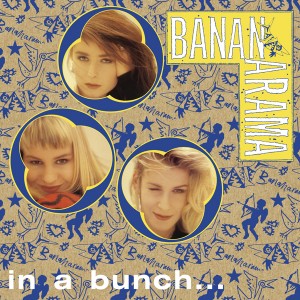 Ever received the traditional orange in your Christmas stocking? Well, this 33-CD (yes, thirty-three… ) collection of singles – including every B-side and remix originally issued around the world plus instrumentals and other rarities – is an overloaded bowlful of festive fruity fun for Bananarama lovers. Boasting approximately 300 remastered tracks in total, over 100 of which have never appeared on previous Edsel releases, every CD is presented in an individual card sleeve with replica original vinyl artwork. The accompanying 48-page booklet features all the lyrics, full discography and new sleeve notes, and comes with a fold-out double-side mini poster, sticker sheet and postcard set. Top banana! 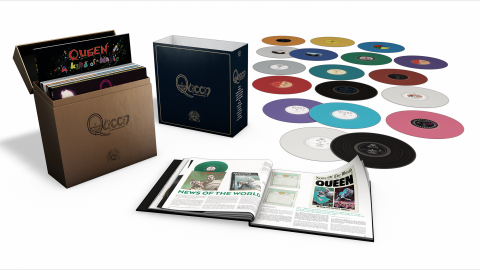 If you like Queen and if, like us, you’re a sucker for coloured vinyl, you’ll love this kaleidoscopic 18-LP boxset featuring all 15 studio albums by the band. Due to issues with ageing original analogue tapes, a painstaking process of creating and restoring high-quality digital masters in the digital domain was employed before cutting the vinyl – at half-speed at Abbey Road studios – and numerous test pressings to deliver the finest possible sound. Perfectly replicated album packaging plus a beautiful large-format 108-page hardback book, showcasing loads of cool memorabilia, rare photos and handwritten lyrics, make this a dream set for all of the Queen’s men and women. 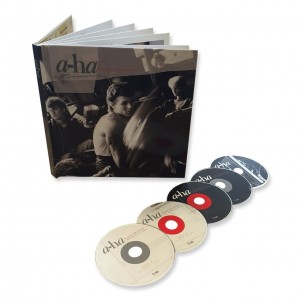 There’s no ends to the lengths a-ha devotees will go (see what I did there… ) to get this 30th anniversary super deluxe edition box set of the band’s debut album. The four CDs include the original album on disc one, the complete collection of remixes on discs two and three and a completely new reading of the album compiled from never-before-heard early/alternate mixes on disc four. A DVD with promos, plus a 60-page 10 x 10-inch hardback book completes this comprehensive offering from Harket & Co. 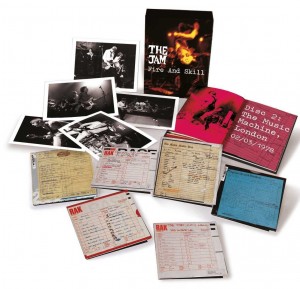 A journalist friend once told me a little anecdote about an event he attended where Paul Weller was among the panel of speakers. When it was the Modfather’s turn to introduce himself, he apparently stood up and said simply (and absolutely poker-faced): “Paul Weller: Volcano of ideas.” Then he sat down again.

Anyhow, I digress. From volcanoes to Fire And Skill… The Jam were an incredible live band and this six-CD collection of six previously unreleased gig recordings – from the 100 Club in 1977 to Wembley Arena during their 1982 farewell tour – all remastered at Abbey Road, pays fitting tribute to their passionate performances. The CDs are presented in individual gatefold wallets and packaged along with a hardcover books, photographic prints and nice reproduction memorabilia. 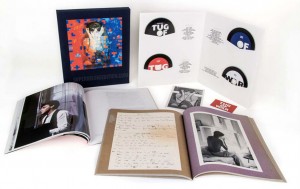 Officially only Paul McCartney’s third solo long-player, 1982’s Tug of War was his first album after the break-up of Wings and the death of John Lennon. A critical and commercial hit, this 3CD+DVD deluxe ‘book’ edition includes six early album track demos, the unissued tracks, plus three commercially released B-sides – Rainclouds, I’ll Give You A Ring and Ebony and Ivory (solo version). The album was actually remixed at Abbey Road for the reissue but this set includes the original mix too. Includes a rather slight DVD (with five promo videos and an 18-minute insider documentary) but the 112-page “essay book”, 64-page “scrapbook” and hi-res audio download mean all angles are covered and a Macca-style thumbs-up from us.

The highly-productive Isley Brothers made a whole lotta albums and there’s just about enough music on this 23-CD set to keep you listening full-time from Christmas Day until New Year. The box features remastered versions of all 21 albums recorded for the RCA Victor and T-Neck labels, with each CD housed in gatefold card wallets, plus an impressive and informative 52-page booklet giving track listings, credits, chart positions, photos and notes. 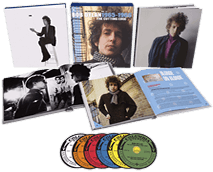 And finally on our festive box-hunting odyssey/trawl is the six-CD deluxe version of Bob Dylan 1965-1966 (or The Bootleg Series Vol. 12; Bob Dylan 1965-1966; The Cutting Edge Deluxe Edition to give it its grand full cover title). The latest in the everlasting Bootleg Series devotes an entire disc to 20 alternate takes of Like A Rolling Stone. Apart from Maggie’s Farm and Gates of Eden, every track from Bringing it All Back Home, Highway 61 Revisited and Blonde on Blonde is included in some unheard form (with multiple variations of many songs) adding up to a total of seven hours of Dylan in the studio and over 100 previously unreleased tracks. It is packaged in a slipcase with a separate 120-page hardcover book.

So, hopefully, there’s something for everyone there. Happy Christmas shopping, and if you need us, we’ll be having a nip of Baileys and nibbling a mince pie.