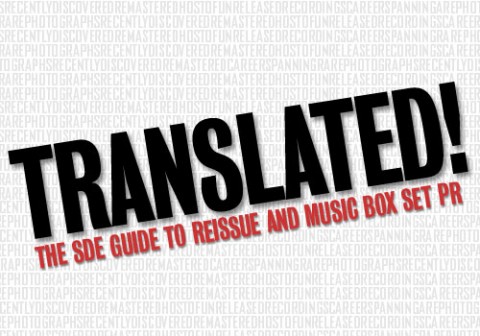 Whether it’s via Press Releases or the blurb on those stick-on spec sheets on the back of music box sets, record labels can *sometimes* over-egg the pudding when it comes to the claims about the music contained within. With that in mind, here’s a lighthearted look at reissue and music box set PR….

“Career spanning” >  The bits of the artist’s career the label have the rights to.

“Host of unreleased recordings” > Music rejected the first time around for being sub-standard.

“Remastered” > Louder, with less dynamic range than the CD you’ve owned for 25 years.

“Remastered by *insert name of artist*” > The artist sat there drinking tea, while a qualified engineer did the work.

“Complete Studio Recordings” > All of the studio albums, but no B-sides, remixes or tracks from compilations.

“Personally overseen by *insert name of the artist*” > The artist forgets to include half the rarities and leaves of stuff they don’t like anymore. Label too scared to argue.

“Previously unreleased on CD” > Until a fan informs them that it isn’t.

“Pressed on 180g heavyweight vinyl” > So it must be good.

“Pressed on 200g heavyweight vinyl” > So it must be even better.

“As originally envisaged by the artist” > They’ve changed their mind.

“Limited Edition” > The label will stop producing it a some point.

“Bespoke packaging” >  You’ll never be able to store it

“Influential” > Didn’t sell much at the time.

Got your own, to add to these? We’d love to read them! Leave a comment with your own contributions.

77 responses to TRANSLATED! The SDE guide to reissue and music box set PR