When Prince worked with Kate Bush 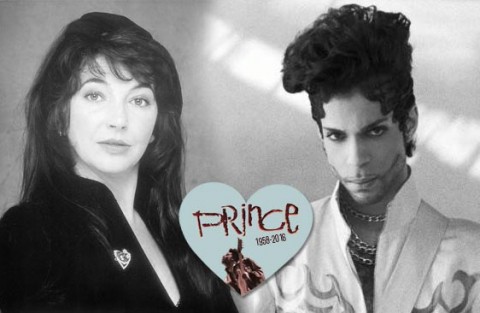 In 1993 Kate Bush released her album The Red Shoes. One track, Why Should I Love You?, featured keyboards, guitar, bass and vocals by Prince. If you’ve ever wondered how they ended up working together or what Prince got up to in the studio while working on the track, read on…

Del Palmer, Kate’s former partner and longtime engineer and bass player, spoke about the track to Future Music in 1993:

“This one actually was recorded in collaboration with Prince – Kate went to see him at a gig and was flattered to be asked to meet him after the show, when they discussed a collaboration. Unable to physically get together in the same room, they swapped multi-track tapes, with a slave reel returning from Prince’s Paisley Park studio covered in vocals, guitar solos and keyboards. The problem then was to put the track back together into something resembling its original form while retaining the best of what Prince had done. He hadn’t added one of the vocal parts which would have been particularly good for him, so it basically took two years to put it back together. What’s left is his lead guitar, some digital synths and some chorus vocals. Then Lenny Henry came in to do a vocal on the end – he’s really got a great voice and ought to be doing a serious record of his own.“

What’s really interesting here, is that we can actually compare the original track that Kate supplied to Prince and the version that ended up being released. The reason that we can do this is because Kate’s original demo, the one she sent to Prince, was leaked many years ago. Some people attribute this to Prince’s then engineer Michael Koppelman, although I have seen no evidence to support this. Anyway, here is the original version that Kate supplied to Prince:

And here is the finished track, as it appears on The Red Shoes. Remember this version isn’t what Prince supplied back, which as Del Palmer indicates above, was too far from its “original form” for Kate’s liking. Prince’s engineer at the time, Michael Koppelman (more from him below) confirms that “she sort of split the difference with what he sent and what’s on the record”:

It’s a fascinating listen. The demo has Kate singing the refrain which starts with “The fine purple, the purest gold…”. That is clearly the part that Del and Kate thought “would have been particularly good for him”, but for whatever reason (perhaps lyrics about purple and gold!?) Prince ignored that. As Del says, British comedian and actor Lenny Henry ended up singing that element.

But there is more… because many, many years ago Prince’s engineer Michael Koppelman spoke in detail about this whole Kate Bush ‘episode’. I think this was in response to an enquiry from someone on the Kate Bush ‘Gaffaweb’ (happy to add a credit, if someone knows who). Anyway, Michael himself posted these words on his personal blog, so it’s 100 percent genuine, if there is any doubt.

A little warning to grieving Prince fans, Michael paints a rather uncomplimentary picture, but remember this is one man’s view, albeit someone that worked closely with him. But you can choose to take his words with as many ‘pinches of salt’ as you please. Here are Michael’s words. He is asked if he ever got to talk to Kate in person:

“I did, but only for a short moment. I was at home and the phone rang. I didn’t always answer the phone in those days, because I was severely overworked. So my answering machine picked it up and I heard Julie, from Paisley Park, saying “Mike, I got Kate Bush on the phone and she has some questions about what format they should send things over on, and I thought it would be best if she talked to you. I, being an admitted Kate Bush fan, freaked, but picked up the phone and talked to Julie. She says, Kate, I have Prince’s engineer Michael Koppelman on the phone and he can answer your questions. Meanwhile, my answering machine is still recording it all, and blaring loudly. I tell my then girlfriend to shut if off just as Kate comes on and says Hello Michael? (so to this day, if I could find it, i have a tape of Kate saying hello to me…). The conversation consisted only of her asking me if they could send 24-track tapes and what series SSL computer disks. I also asked her if she was going to come to Minneapolis, and she said I don’t think I’m wanted out there right now. Then we basically said good-bye and hung up.

It’s funny because Prince knew I was a huge KB fan. He was too, but not like me. The first time I asked him if he liked Kate Bush he said, she’s my favorite woman. I also made him a tape of all the KB b-sides, which fucking rule. When The Sensual World came out he had someone go get it and we listened to it in the studio. He didn’t dig it that much, but I knew you can’t always tell right away with a Kate album. TSW grew on me, but it is still not her best effort. This Woman’s Work is a masterpiece, though, and makes the whole album worth it. But I digress. Prince is weird, and a couple stories in this post prove it. I may be tooting my own horn here, but Prince has a weird ego. I think *part* of his motivation to work with Kate was the fact that I worshipped her, and he knew it would impress me that he could call her on the phone and work on her music and shit.

ANYWAY, what led up to the phone conversation above: one day Prince’s assistant, Therese, told me as we were talking on the phone that Kate Bush had called. Therese also knew I was a big Kate fan. Then, in the studio that day, Prince said, guess who I talked to today. Me, being stupid and unable to keep my mouth shut, said, Kate Bush? Prince got a little miffed, and said How did you know that? And I said Therese told me, and he said, hmm, I should dock here for that. At that point I knew I fucked up and tried to say, no, she just knew I’m a big fan. As a side note, I told Therese that Prince was a little pissed that she had told me that, and she apologized to him. Therese is a really cool person. So, Prince tells me that he and Kate are going to work on a tune together. He also told me that while they were talking he told her that his engineer would rather work with her than him. (I thought, wow, Prince and Kate Bush talking about me!).

ANYWAY, Eventually the phone call above occured and the tapes arrived and I put them up and got a rough mix up. I still have a cassette of it. It fucking rules. It is 1 million times better than the lame disco Prince put on it. There was, of course, no disco on it before Prince got his hands on it. So Prince comes in and listens to it. And the brutality began. First we sampled the drum thing and synced it up to my Powerbook so we could do MIDI. At that point, we essentially created a new song on a new piece of tape and then flew all of Kate’s tracks back on top of it. So now we could run the sequencer and add all the keyboards that Prince put on. So Prince stacked a bunch of keys, guitars, basses, etc, on it and then went to sing background vocals.

When Prince does vocals, he sits right at the recording console with a microphone hanging over it and does his own punching in and out. So he kicks everyone out of the room when he sings. It took him a few hours and then he called me back in and played me the thick, multi-tracked background vocals he had put on. Now, as we all know, the song in question goes “Of all the people in the world why should i love you”. When Prince called me back in and played me what he had done, he had sung “All of the people in the world”, instead of Of All. I said, isn’t it OF all the people in the world? Not ALL of? He said, no, we had a little talk about that, in his cocky way, as if to say he had talked with Kate about changing the words to “all of” instead of “of all”.

The next day, I was waiting at my hotel room for the call to go to the studio when the assistant engineer, Sylvia Massy, called and said Prince was in the studio doing vocals. I was surprised; i was always called well in advance of Prince going into the studio. When I got there he was changing all the vocals to “Of All”, and was sampling them in himself, which is something he would normally never do himself. My interpetation? He made a mistake, as humans do, and didn’t have the guts to admit it. That’s weird. So I sorta poked my head in at one point and asked him if he needed any help, and we went on with the day. Eventually he had me do a rough mix, and when he had approved it, we sent it to Kate.

I got a call from Therese a few days (or weeks, I forget) later. She said, Kate Bush said to destroy all copies of that mix. I said, huh? Did she not like it or something? (my heart rejoiced, because I hated what Prince did to it) She said, I don’t know, she just said to destroy them. Later on Prince told me, Kate Bush liked what we did. She said it sounded very American. So at that point I wasn’t sure if she was even going to use it. We sent the tapes back and she sort of split the difference with what he sent and what’s on the record. Kate, if you read this, stick the pre-Prince version of Why Should I Love You out on something. And let me do a remix of Not This Time.

Make of Michael’s words what you will, but it’s certainly an interesting read. I’m a big Kate and Prince fan and I quite like elements of both versions. I do think it would have been infinitely better with Prince singing the Lenny Henry lines, but the fundamental issue, in my opinion, is that Why Should I Love You? just isn’t a very good song, certainly not by Kate’s high standards. Would love to hear you thoughts, so leave a comment.

Kate’s words (published on her site) on Prince’s untimely death: “I am so sad and shocked to hear the tragic news about Prince. He was the most incredibly talented artist. A man in complete control of his work from writer and musician to producer and director. He was such an inspiration. Playful and mind-blowingly gifted. He was the most inventive and extraordinary live act I’ve seen. The world has lost someone truly magical. Goodnight dear Prince.”

38 responses to When Prince worked with Kate Bush