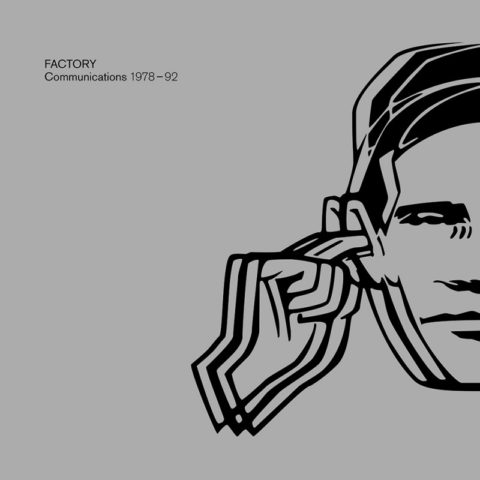 Factory Records is to be celebrated with two new box sets.

The two boxes, titled Use Hearing Protection: Factory Records 1978-1979 and Factory: Communications 1978-92 cover the label’s 15 year output from its beginnings as some sort of Warholian wonky art project begun by Tony Wilson, via the success heights of New Order and Happy Mondays through to it’s baggy, bankruptcy-forced ending. 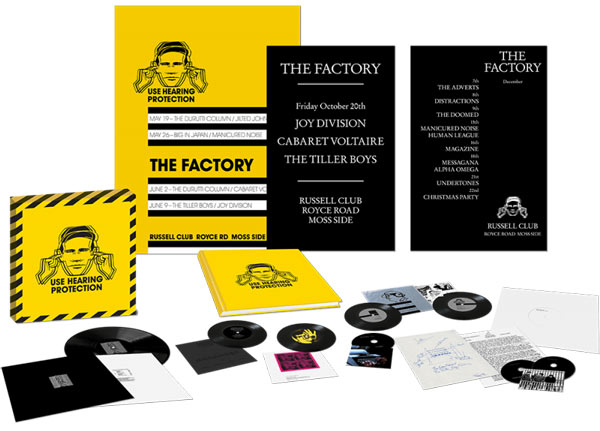 The early history of the label is also detailed in a 60 page book with text by James Nice, photos by Kevin Cummins and archival interviews with Tony Wilson, Rob Gretton, Joy Division and more.

The four vinyl records are the ‘The Factory Sample EP’ (Fac 2) which was a 2×7 inch set with tracks from Joy Division, Durutti Column, John Dowie and Cabaret Voltaire; ‘All Night Party’ by A Certain Ratio (Fac 5), ‘Electricity’ by Orchestral Manoeuvres in the Dark (Fac 6) and the Unknown Pleasures album by Joy Division (Fact 10).

Also included are a white label 12” single by The Tiller Boys (originally intended as Fac 3 but ultimately not released), and a never before heard and now restored across two CDs audio interview with Joy Division, Tony Wilson and Rob Gretton conducted in August 1979 by journalist Mary Harron. Also newly restored is the 8mm short No City Fun (Fac 9), presented here on DVD and featuring music by Joy Division.

The set’s recreated posters (Facs 1, 3 and 4) date from May, October and December 1978, stationery (Fac 7) and an A4 print of a design for the, um, Menstrual Abacus aka The Factory Egg Timer was given the catalogue number of Fac 8. The box is limited to 4000 copies worldwide. 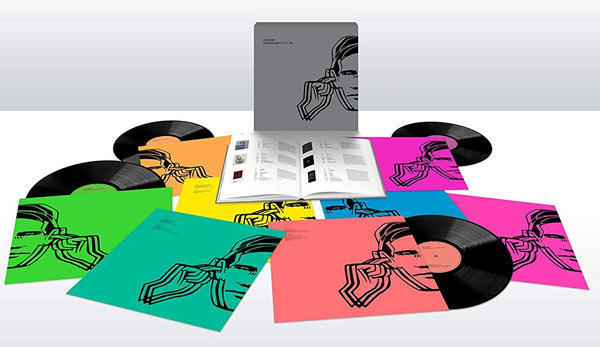 Alongside the obvious key numbers and hits by New Order, Happy Mondays, Joy Division, The Durutti Column and Electronic, the lesser likes of Crispy Ambulance, Royal Family and the Poor, Quando Quango, Marcel King and Cath Carroll. While not definitive, you get a good overview of a label that had space for both X-O-Dus and the England football team.

Black vinyl is the standard version, but a silver-coloured vinyl edition is limited to 500 copies and is exclusive to the Rhino store. There’s no mention of whether the original CD box will be reissued, or any news of download codes, as yet.

The Use Hearing Protection box appears to be completely exclusive to the Rhino store, so you can find that here.

As a bonus, an expanded exhibition, with the Use Hearing Protection, FAC 1-50 objects at its core is being developed by the Science and Industry Museum in Manchester. This exhibition is due to open July 2020. So that’s something to look forward to.

The first 10 numbered records and objects

Menstrual Abacus aka The Factory Egg Timer – presented on A4 Print

‘Big Noise from the Jungle’ / ‘Slaves and Pyramids’ / ‘What Me Worry?’

26 responses to All the FACs / Factory Records box sets