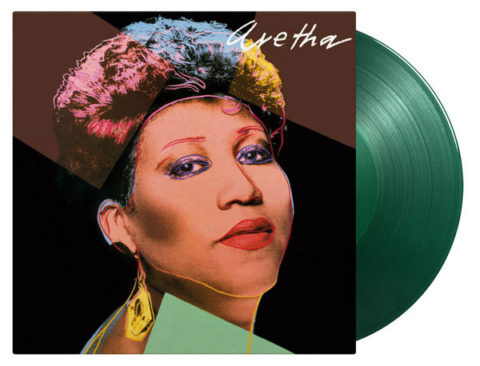 Aretha Franklin‘s 1986 album Aretha is to be reissued on limited edition green vinyl in July.

Produced by Narada Michael Walden, Aretha was the fifth album issued on Clive Davis’ Arista label. It delivered three top 30 US hit singles, including the transatlantic number one I Knew You Were Waiting (For Me), which was of course a duet with George Michael and was issued about six months before he kicked off his post-Wham! solo career with ‘I Want Your Sex’.

The album boasts an excellent Andy Warhol-designed front cover (apparently his final work before his death in early 1987) and translucent green seems a decent choice when it comes to the colour of the vinyl.

This is limited to 2000 individually numbered copies and will be issued on 3 July 2020 via Music On Vinyl. You can pre-order from the SDE shop using this link or the button below.

1. Jimmy Lee
2. I Knew You Were Waiting (For Me) duet with George Michael
3. Do You Still Remember
4. Jumpin’ Jack Flash

1. Rock-A-Lott
2. An Angel Cries
3. He’ll Come Along
4. If You Need My Love Tonight duet with Larry Graham
5. Look To The Rainbow