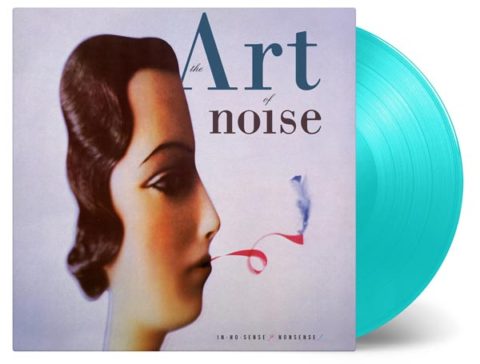 Music On Vinyl will issue a 2LP vinyl coloured vinyl deluxe edition of the Art of Noise‘s 1987 album In No Sense? Nonsense! This edition features two sides of bonus tracks, in addition to the remastered album.

The audio is pressed on two 180g turquoise vinyl records, which are presented in a gatefold sleeve. This set features printed inner sleeves, a four-page booklet and is a numbered edition limited to 2,000 copies.

As a recap, at this point in the history of the Art of Noise, Gary Lagan had left (after In Visible Silence) leaving Anne Dudley and J.J. Jeczalik to continue as a duo. Dudley recalls, “At that time, we were meeting new people, doing adverts and films and things. There was lots of new input. These adverts generated other new tracks. They would evolve and we’d agree they were good ideas. And we’d ask each other what would happen if we did this, this and this? So that kept everything evolving.”

This special limited coloured vinyl 2LP edition of In No Sense? Nonsense! is released on 26 April 2019. Pre-order from the SDE shop using this link or the button below.

6 responses to Art of Noise / In No Sense? Nonsense! / deluxe 2LP blue vinyl with bonus tracks