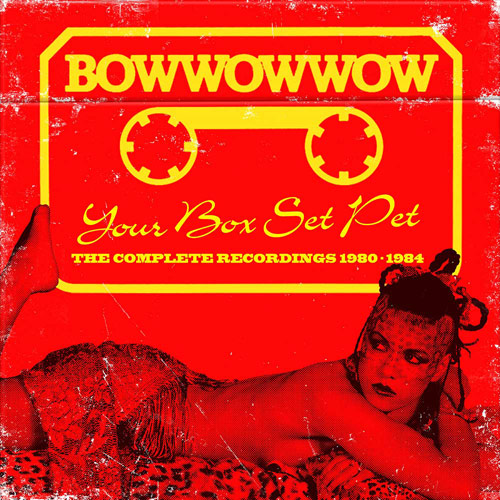 Bow Wow Wow was put together by Malcolm McLaren in 1980 and featured former members of Adam And The Ants and the unknown Annabella Lwin.

The band would go on to produce three studio albums, with 1980’s tape-only Your Cassette Pet – their first and only album on EMI (they switched to RCA thereafter). See Jungle! See Jungle! Go Join Your Gang Yeah, City All Over! Go Ape Crazy! was the second album (released in 1981) and contains the UK top ten hit Go Wild In The Country. The third and final long-player When The Going Gets Tough, The Tough Get Going, was issued in 1983. Between the second and the third record came two EPs (Last of the Mohicans and Teenage Queen) and the compilation album I Want Candy.

This three-CD box set purports to be the ‘complete’ recordings, rounding up tracks from albums, EPs, flexi-discs and including alternative versions, B-sides, remixes – the lot.

Your Box Set Pet: The Complete Recordings of Bow Wow Wow comes in a clam shell style box set with the CDs in card replicas of the original releases.