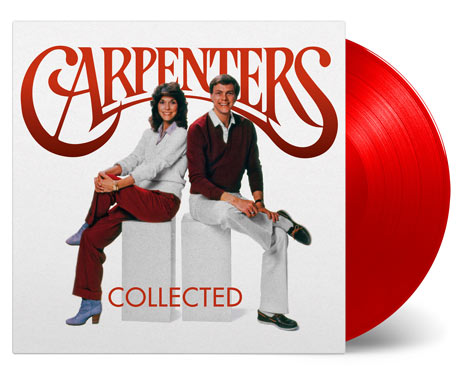 Music On Vinyl continue with their popular ‘Collected’ series with a 2LP compilation of Carpenters hits, album tracks and rarities pressed on limited edition red vinyl.

The ‘soft-pop’ duo had enormous success in the 1970s with songs like ‘Close to You’, ‘Ticket to Ride’, ‘We’ve Only Just Begun’, ‘Superstar’, ‘Rainy Days And Mondays’ and many more.

This 25-track double vinyl set includes such hits and keeps with tradition by including some quirkier selections for side four. In this instance, it’s Karen Carpenter’s ‘Still Crazy After All These Years’ and Richard’s poignant ‘Karen’s Theme’ (a song he dedicated to Karen after her tragic death in 1983).

This 2LP set pressed on red vinyl is limited to 3,000 units and comes as an individually numbered gatefold package with four-page booklet and a high quality outer PVC sleeve.

Carpenters Collected will be released on 28 June 2019. You can order from the SDE shop via this link or using the button below.