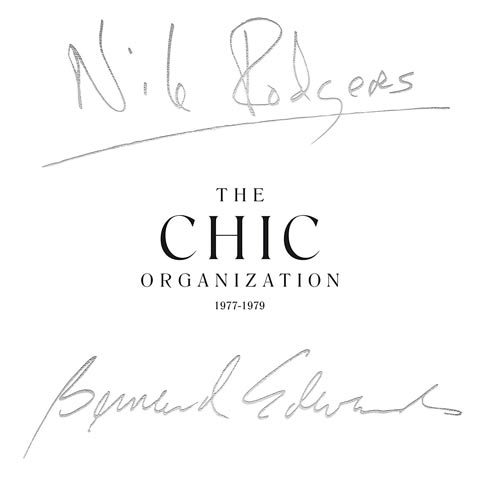 Rhino/Atlantic are issuing The Chic Organisation 1977-1979 a new 6LP vinyl and five-CD box set that features CHIC‘s first three albums, Sister Sledge’s We Are Family and a bonus disc of seven-inch edits and 12-inch remixes.

This release is announced on the eve of the 40th anniversary of US chart-topping single ‘Le Freak’, which was released on 21 September 1978.

The three CHIC albums in this box set are CHIC (1978), C’est Chic (1978) and Risqué (1978). The Sister Sledge album We Are Family was of course entirely written and produced by Nile Rodgers and Bernard Edwards, which is why it forms part of this set.

These have been newly remastered at half-speed from the original Atlantic stereo tapes by Miles Showell at Abbey Road Studios. As executive producer, Nile Rodgers personally oversaw the remastering process with the approval of Bernard Edwards’ estate.

The Chic Organisation 1977-1979 is being issued as both CD and vinyl box sets but the latter gets an exclusive 12-inch single – an exact reproduction of CHIC’s first single, a 12-inch promo for ‘Dance, Dance, Dance (Yowsah, Yosah, Yosah)’ that Buddah Records released in 1977 prior to the band signing to Atlantic. Apparently, this was an especially important inclusion to Rodgers as he and Edwards always felt the bass and bottom end on this master was superior to the Atlantic issue.

Nile Rodgers said, “My life has been everything I ever hoped it could be as a result of the incredible music Bernard and I made together. This has been recognized both critically and commercially as some of the finest of all time and that’s everything we hoped for as two young musicians who knew no limits and who’s partnership was effortless.  Having the biggest selling single in the history of Atlantic Records, one of the greatest labels of all time, what a dream! It was important to me that we make these the best sounding editions ever as a tribute to ‘Nard.  I’m quite certain that Miles Showell and I and the team at Abbey Road succeeded. Forty years later this all feels so fresh.”

Both box sets contain newly written definitive essays by Toure and Paul Morley while the vinyl edition includes an exclusive essay by musical historian Ashley Kahn. The Paul Morley essay is actually edited for the CD box so there’s another exclusive for you, the ‘full length’ essay in the vinyl box!