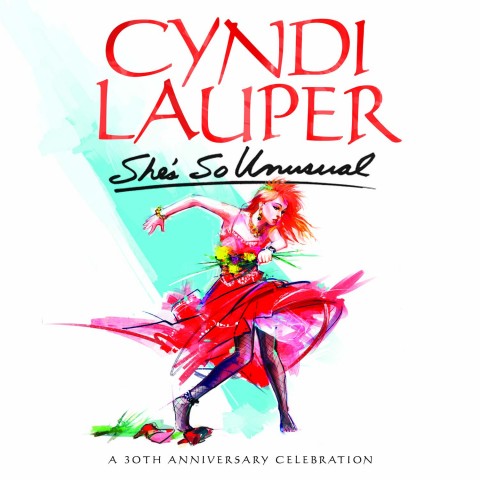 A two-CD deluxe will be the only format that includes an extra disc featuring nine bonus tracks, including unreleased demos and rehearsals, as well as the Arthur Baker Remix of She Bop. Some period cuts are noticeable by their absence, including (incredibly) the twelve-inch version of Girls Just Wanna Have Fun.

The deluxe also includes a “reusable sticker set”, including vinyl cut outs of Lauper’s outfits and accessories that can be arranged in different combinations on a 3D fold-out backdrop of the bedroom featured in the Girls Just Want To Have Fun video. This special packaging explains a higher-than-expected price-tag for a 2CD deluxe edition.

Three 2013 remixes are appended to the album on CD 1 (groan), and these are also available on the standard one disc remaster. If you purchase the vinyl version it comes with a download code for the remixes (it’s not clear if this includes the album as well).

She’s So Unusual 30th Anniversary Celebration is released on 30 March 2014. Leave a comment and let us know your thoughts on this release.