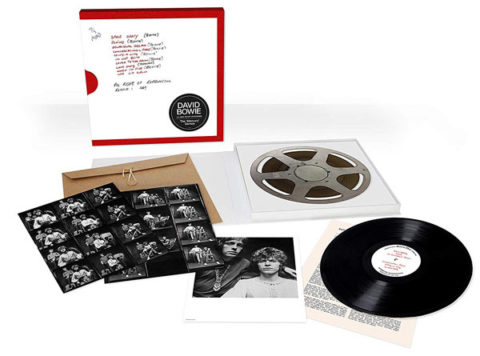 The David Bowie ‘Mercury Demos’ release, which caused outrage thanks to an almost laughable retail price tag has dropped in price on Amazon in the UK by almost 25%.

This set – which features ten early Bowie recordings from 1969 pressed on one single vinyl record – is now £66, down from £86. Far from a great ‘deal’ I think you’ll agree, but at least UK pricing is now a bit closer to the USA price.

The vinyl record comes in a lift-off lid box whose contents also include a print, two photo contact sheets and sleeve notes by Mark Adams.

Talking of this ‘Mercury Demos set’, Jeff Rougvie, who worked with David on the Rykodisc reissues back in the early 1990s, recently, gave his views on this year’s splurge of Bowie vinyl box sets. Well worth a read.