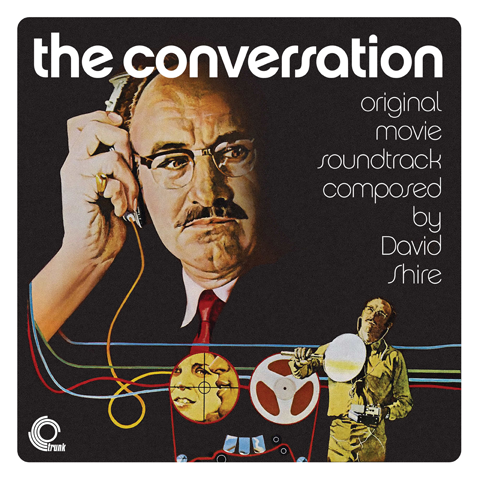 Here’s one I’m really excited about… Trunk Records will next month release David Shire‘s haunting soundtrack to Francis Ford Coppola’s 1974 film The Conversation on vinyl for the first time.

The film was written, produced and directed by Francis Ford Coppola, and made in between The Godfather and The Godfather Part II. It stars Gene Hackman as surveillance expert Harry Caul, a loner who becomes obsessed with the detail and implications of a conversation he is hired to record (a young Harrison Ford works for Caul’s client).

Coppola chose a young David Shire (his brother in law) to do the music. With no budget for a big orchestra Shire came up with a deceptively simple piano theme – the sparse and haunting score works beautifully with the film as Harry’s world starts to unravel.

What’s incredible about the music for The Conversation is that the soundtrack was never issued at the time.  A seven-inch demo of the theme was sent out as promotional material by Paramount (PAA-0305), and the same music was also issued on as a seven-inch vinyl in Japan around the same time (JET-2273), but until now nothing else has ever been pressed on vinyl (Intrada put out a CD version in 2001).

The Conversation is released on 140g black vinyl on 2 November 2018 via Trunk Records. You can pre-order your copy via the SDE shop using this link or the button below.