Doctor Who / The Daleks’ Master Plan 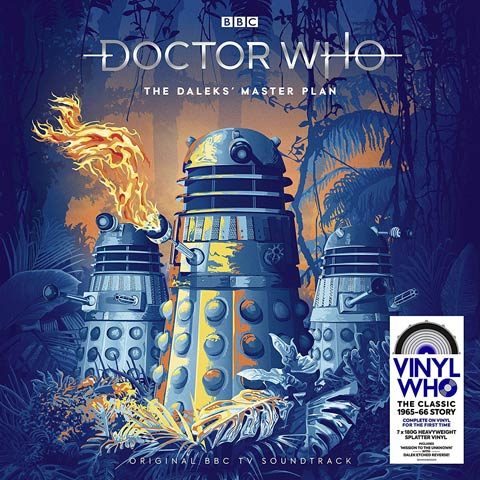 After successful League of Gentlemen and Hitchhiker’s Guide to the Galaxy packages, Demon Records continue to plough the field of radio and TV productions for deluxe vinyl releases. The latest is The Daleks’ Master Plan a “narrated full-cast TV soundtrack” Doctor Who adventure starring William Hartnell as The Doctor.

The Dalek’s Master Plan is a 12-part adventure that was first shown on BBC TV between October 1965 and January 1966, where The Doctor’s arch-enemy, The Daleks, threaten to destroy the fabric of time itself (naturally).

This drama was written by Terry Nation and Dennis Spooner and is the longest single Doctor Who adventure ever made for television. Pity the filmed recordings of nine out of the 12 episodes are lost from the BBC archives (!). Thankfully, the audio endures and this is what this physical release is celebrating.

A linking narration is provided by Peter Purves who plays Steven in the adventure, and the cast includes Kevin Stoney as Mavic Chen, Nicholas Courtney as Bret Vyon, Jean Marsh as Sara Kingdom and Peter Butterworth as the Meddling Monk. Of course there are all manner of sound effects including Ron Grainer & Delia Derbyshire’s theme tune, and the familiar ‘wheezing, groaning’ of the TARDIS, and so on. 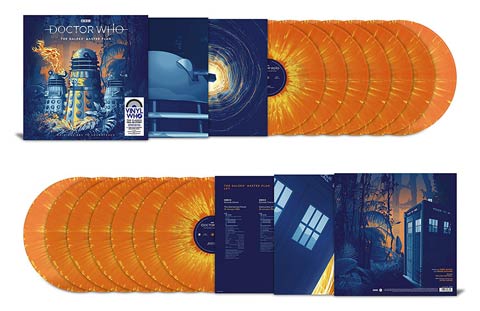 A special orange ‘splatter’ vinyl is an Amazon UK exclusive.

The standard vinyl is translucent blue, but Amazon UK have a special exclusive edition with the seven 180g vinyl records pressed on orange ‘splatter’ vinyl.

Top marks to the bright spark who came up with the sticker design on the front that reads “WHO VINYL” and uses elements of the Dalek design to ape The Who‘s visual identity and you have to say the art direction on this package, including a stunning front cover, looks wonderful.

The Daleks’ Master Plan is released on 15 February 2019. The Amazon Exclusive orange splatter vinyl is limited to 1000 units.

LP 1
1. Prequel Mission to the Unknown

43 responses to Doctor Who / The Daleks’ Master Plan