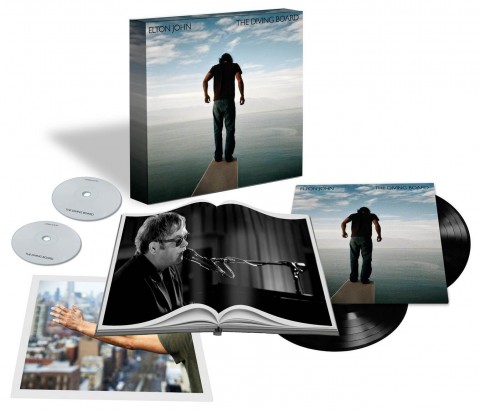 “Target” customers get two exclusive bonus songs on a 21-track CD, not included in this very expensive box set

In June we told you about the Super Deluxe Edition box set of Elton John‘s new album The Diving Board (released next week).

This set was retailing for £115 at that time (it later dropped) and that seemed like incredibly poor value, since it contains the same extended 19-track version of the album available on the deluxe CD, a 15-track 2LP gatefold vinyl version of the album, a DVD (content unknown) and a book.

If you decided to put in a pre-order for this box, it’s time to examine that particular financial wound and pour some salt into it, because it has come to our attention that The Diving Board is available from Target stores in the US with two exclusive bonus tracks NOT included in this overdraft-inducing Super Deluxe Edition box set.

Yes, Gaugin Gone Hollywood and 5th Avenue are the two exclusive bonus tracks on the unique 21-track version available “only at Target” (they are actually on a Japanese SHM-CD too).

Sigh. It’s like Suede‘s Bloodsports debacle all over again. Perhaps record labels think we won’t notice. America is very far away from the United Kingdom, after all. But seriously, in this day and age we are all global consumers. Music buyers in the US regularly purchase from Amazon UK and enjoy no VAT and reasonable shipping. Enthusiasts in Britain are debating the merits of every music release in online forums, with people from around the world.

The music labels will claim that they ‘have’ to offer something exclusive to get products in these big hyper-stores in the US or to work successfully with iTunes. The problem is that while they ‘build relationships’ with retail, they are eroding the goodwill of the end consumer. Rather than reward customers for spending very large sums, and making them feel good about their purchases, often the buyer is treated as a mug. What other conclusions can be reached when someone is persuaded to purchase a ‘super deluxe edition’ box set for £100+ and they later find out that something exclusive has been offered in another territory for a fraction of the price of the expensive box?

It gets worse, because Walmart in the US have their own exclusive version of The Diving Board – A CD+DVD combo, that although not confirmed, looks to replicate some or all of the DVD element from the Super Deluxe Box Set.

And don’t count Best Buy out either, because they have their own exclusive edition too. This time you get a different CD+DVD combo, with the DVD featuring a documentary called The Making of The Million Dollar Piano, which will be about John’s Caesars Palace, Las Vegas show.

To end on a positive note, Amazon UK are offering one of these two Target exclusive bonus tracks (5th Avenue) as a FREE MP3 – Go get it here and go figure the marketing strategy!

What do you make of this ‘exclusive’ madness? Great fun, shopping around for all the different versions, or madness? Do you have any sympathy for the record companies trying to sell their wares to real people, in physical locations?