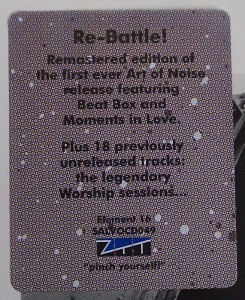 Ian Peel, the architect and archivist behind much of the recent output from ZTT records, has been in touch to respond to our criticism regarding Into Battle with the Art of Noise.

In our review of April 19 we claimed that the ’18 previously unreleased tracks’ sticker was simply untrue since many of these tracks appeared on the And What Have You Done With My Body, God? Box Set from 2008. Here’s what Ian  had to say…

I’ve had a word with the Zang Tuum Tumb Sticker Department and told them off. They protested (as you would), saying all of the Worship tracks (they thought) were previously unreleased in that context, size, shape, length and format. But, truth be told, they admitted they’d got carried away. But purely carried away by the thought of getting Worship out into the open after all these years.

I have to say I believe them. Though the point you make is spot on. So I’ve suspended the Zang Tuum Tumb Sticker Department from duty, with immediate effect. As such there will be no sticker for the next release (Element 19, 808 state). Or the release after that (Element 18, Propaganda).

We also raised eyebrows at the fact that some of the tracks on Into Battle had already been released under a different name. The buyer would not know this until they listened to the music. Ian’s response is below.

Personally I’ve always approached Z for the puzzle, as opposed to pedantically. But maybe I’m in the minority – I remember lots of disgruntled people in the 80s who got something different to the Sex Mix of Relax when they bought the Sex Mix of Relax. And a few people who returned their 7″ of Dr Mabuse as it was instrumental.

On the AoN front, I once knew someone who wrote to China records to complain that Backbeat was the same track as Beatback! You can imagine his horror when he heard From Hammersmith To Tokyo And Back.

We’d be interested to hear what you Art of Noise / ZTT fans think of what Ian has had to say. Do leave a comment and let us know.