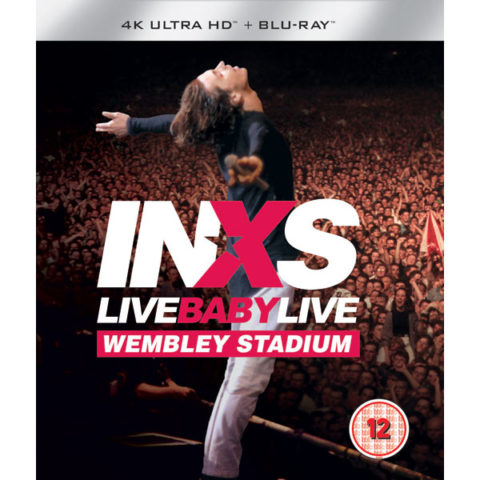 Live Baby Live, INXS‘ incredible 1991 live show at Wembley Stadium was issued last year on audio formats, but next month will finally be released on blu-ray and DVD, and the good news is the fully restored film – with Dolby Atmos soundtrack – will be available on the 4K Ultra High Definition (UHD) blu-ray format for incredible picture quality.

This visuals have been meticulously restored over a twelve-month period from the original 35mm negative to 4K Ultra HD, and during the process a previously thought lost performance of the X album track ‘Lately’ was discovered and reinstated into the film.

I was lucky enough to see a screening of this last year and can confirm that it’s stunningly good. They’ve actually converted 4:3 to 16:9 with careful shot-by-shot reframing, for the full cinematic experience. The audio for the film will be in Dolby Atmos and DTS-HD Master Audio (Blu-ray only), DTS 5.1 Surround and Dolby 5.1 Surround (all created by Giles Martin and Sam Okell at Abbey Road Studios). See the video below which goes a great job of explaining the process and illustrating the improvements.

It’s important to be aware that the 4K UHD version will not play on a standard blu-ray player, you need a player that is 4K UHD compatible (and a TV that will cope!). However, the 4K disc is a two-disc package that does include a ‘standard’ blu-ray as well, so even if you aren’t set up right now, you are future proofed for later hardware upgrades. Also, both blu-rays are ALL REGION so that is not an issue (in fact all the discs, including DVDs are all region, NTSC).

There are audio/video bundles available too, but only 2CD+blu-ray and 2CD+DVD, so no 4K bundle option…

All the various formats – and there are FIVE different physical configurations – are available on 26 June 2020. We are making the 4K blu-ray package available via the SDE shop which you can pre-order with this link or by using the button below.