Japanese CD of the Day / Kate Bush: “Never For Ever” supermasters reissue 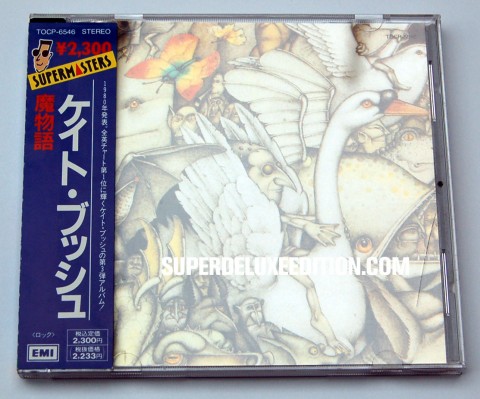 Although Kate Bush‘s third album Never For Ever didn’t sell quite as well as her 1978 debut The Kick Inside, it did reach number one on the UK album charts in September 1980, something both of her first two records failed to do (Lionheart was issued in late 1978).

Co-produced with Jon Kelly, this was Kate getting to grips with production, drum machines and the Fairlight CMI sampler (see Army Dreamers’ rifle-cock). The album is best known for her hit Babooshka, a tale of infidelity and revenge, although the war themed Breathing and Army Dreamers were both top 20 hits in the UK.

This Japanese reissue (TOCP-6546) dates from 1990 and is part of the “SuperMasters” series issued at the time. The most obvious difference between this and the standard European/UK issue is the cover. The original image (by Nick Price) is a painting of Kate standing up with scores of weird and wonderful creates flying out of her skirt. For whatever reason this was deemed inappropriate for the Japanese and so they selected a detail from this artwork and made that the cover. Hence, no Kate and no album title on the front! 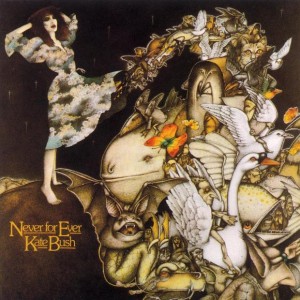 The original cover for “Never For Ever” (click to enlarge)

This Japanese ‘SuperMasters’ CD has a small biography at the front (in Japanese) but also includes lyrics to all the songs in English and Japanese. The audio is identical to the other CD versions (no bonus tracks) although it sounds very well mastered. Since Never For Ever has never been remastered (c’mon Kate!), this is probably as good at the album will sound on CD. 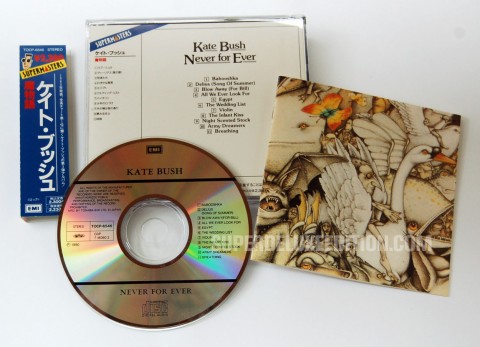 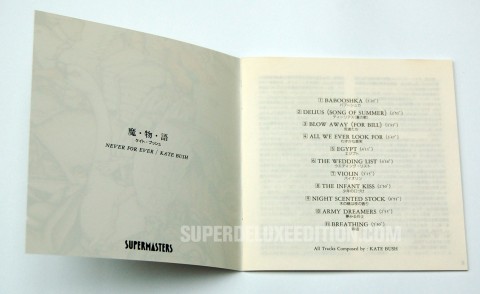 10 responses to Japanese CD of the Day / Kate Bush: “Never For Ever” supermasters reissue