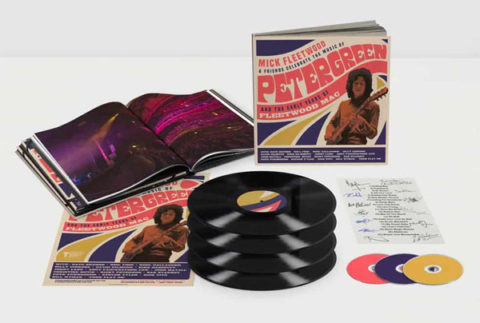 Tonight Mick Fleetwood will take to the stage in central London with an all-star cast to honour the early years of Fleetwood Mac and its founder, Peter Green. This one-of-a-kind concert will be recorded and film and issued as a special super deluxe edition box set later in the year.

Mick said: “The concert is a celebration of those early blues days where we all began, and it’s important to recognise the profound impact Peter and the early Fleetwood Mac had on the world of music. Peter was my greatest mentor and it gives me such joy to pay tribute to his incredible talent. I am honoured to be sharing the stage with some of the many artists Peter has inspired over the years and who share my great respect for this remarkable musician.”

The box set will be a 4LP+2CD+blu-ray deluxe book set. The audio will be offered via the vinyl and CDs while the blu-ray will concert/documentary type content. Everything is being filmed tonight.

Early pre-orders get to see their names in the credits of the concert/documentary and also this package exclusively comes with tonight’s setlist with printed signatures of the artists involved, and an exclusive A1-sized silk screen printed event poster (which comes in a tube, not folded).

The Mick Fleetwood & Friends Celebrate The Music Of Peter Green And The Early Years Of Fleetwood Mac box set will be released on 30 April 2021 (was 20 March and prior to that was 19 October 2020).