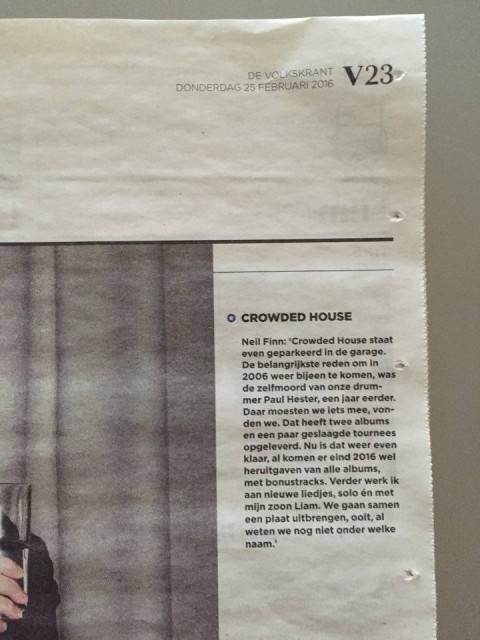 After the hints of last year, in an interview with Dutch newspaper Volkskrant (published yesterday) Crowded House frontman Neil Finn has confirmed reissues are definitely happening in 2016…

Specifically, “all” Crowded House’s albums will be re-released by the end of this year, with bonus tracks.

Obviously there’s still plenty of questions around these. Will we see Phil Collins-style 2CD sets, or more ambitious offerings which include video material? Will these be offering the Crowded House fan demos and unreleased tracks, or will the audio simply gather up commercially released material?

The translation of the article is as follows:

Neil Finn: “Crowded House is on hold for a while. The most important reason to reunite in 2006 was the suicide of our drummer Paul Hester one year earlier. We had to do something with that we thought. It resulted in 2 albums and a couple of successfull tours. Now that is finished there will be reissues of all the albums at the end of 2016, combined with bonus tracks. I also work on new songs, solo and with my son Liam. We will be releasing a record together someday although we don’t know under what name”.