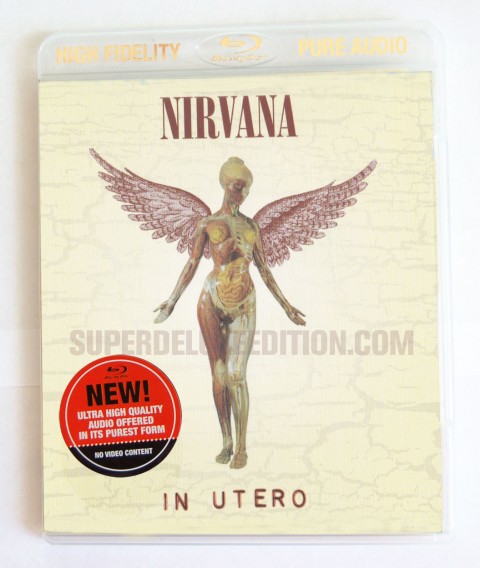 A mock-up the Nirvana In Utero Blu-ray Audio

Nirvana‘s Nevermind and In Utero are two of the titles being reissued this month on the Universal’s ‘High Fidelity – Pure Audio’ branded blu-ray audio discs.

Other albums issued include The Rolling Stones‘ classic Exile On Main Street, Queen‘s A Night At The Opera, Crime Of The Century by Supertramp and Beck’s Sea Change.

A big discussion point will be whether we get offered a 5.1 surround sound option to sit alongside the stereo audio, on any of these titles. In the booklets supplied with the first releases Universal state: “Where possible tracks will be available in 5.1 surround, but in order to pay respect to the original material this is not possible for every release”. Certainly the Queen title has been available in 5.1 on various other formats, so one would expect to see them include that.

Presumably, In Utero will be the new Steve Albini remaster, but it is curious that this blu-ray audio wasn’t mentioned in the press release for that reissue, and will it come with the 32 bonus tracks you get on the similarly priced 2CD deluxe edition?

At the moment these are only available from Amazon Germany, with a release date of 20 September. We will update this page if and when other territories get these releases!

Crime Of The Century / Supertramp
GERMANY Pre-order: Crime of the Century (Blu-Ray Audio)

Back To Black / Amy Winehouse
GERMANY Pre-order: Back to Black (Blu-Ray Audio)