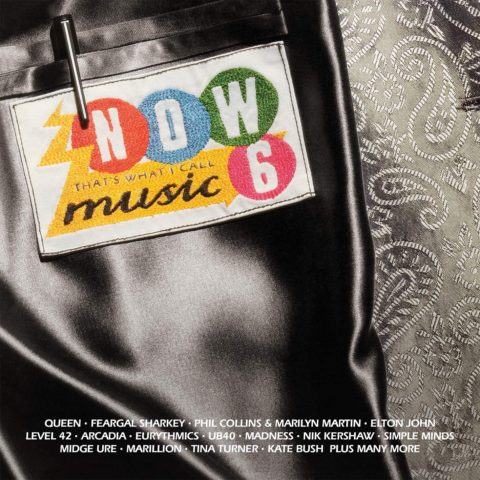 Feel the Quality on CD for the first time

Now That’s What I Call Music 6 will be reissued next month as a 2CD set, as the reissues of the classic compilation series continue.

Now 6 was originally released in November 1985 and was the biggest selling ‘Now’ at that point in time. It features a particularly strong track listing, in my opinion, with post Live Aid Queen (‘One Vision’), what turned out to be Nik Kershaw‘s last ever UK hit single (‘When A Heart Beats’), Eurythmics‘ only number one (‘There Must Be An Angel (Playing With My Heart)’), Kate Bush‘s seminal ‘Running Up That Hill (A Deal With God)’, Arcadia‘s ‘Election Day’ and many more great songs.

It’s not perfect – no ‘Now’ is – but at least Cliff’s cheesy ‘She’s So Beautiful’ and David Grant & Jaki Graham‘s awful ‘Mated’ are at the end of their respective sides!

As we prepare to play guess-which-track-will-be-the-wrong-mix, we should also note that there is one track missing, Bryan Adams and Tina Turner‘s ‘It’s Only Love’ (it belongs between ‘Alive and Kicking’ and ‘Empty Rooms’). The ‘Now’ team have confirmed they couldn’t ‘clear’ this track for licensing.

A word on the cover. Probably my absolute favourite ‘Now’ artwork. Just love the thought and detail that have gone into this. Today’s computer generated trash is not in the same stratosphere as what the ‘Now’ team were creating 35 years ago.