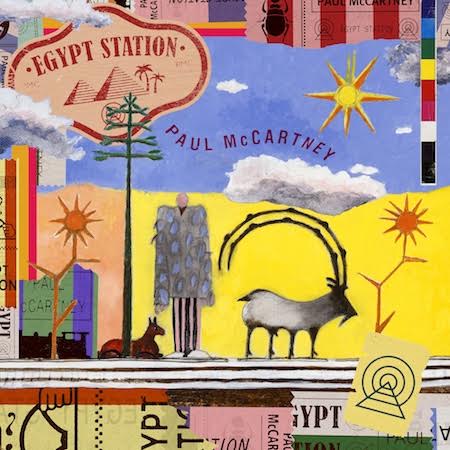 Paul McCartney‘s new album is titled Egypt Station and will be issued in September.

His 17th studio solo long-player has been produced by Greg Kurstin (except for one Ryan Tedder track) and contains 14 songs, including the ‘double A-side single’ combo of I Don’t Know and Come on to Me. A physical release of this ‘single’ hasn’t been confirmed and isn’t looking particularly likely.

The album is supposed to have a ‘travelogue’ vibe and McCartney has said the following about the it: “I liked the words ‘Egypt Station.’ It reminded me of the ‘album’ albums we used to make.., Egypt Station starts off at the station on the first song and then each song is like a different station. So it gave us some idea to base all the songs around that. I think of it as a dream location that the music emanates from.”

Despite MPL announcing the album, there is no actual confirmation of formats (and nothing as straightforward as a track listing) but by looking at what’s listed right now in various places, we can deduce that there appears to be a standard vinyl, a standard CD, a deluxe vinyl edition (there is no info at all on what makes it ‘deluxe’) and a coloured vinyl versions of both vinyl options, which are exclusive to McCartney’s store. There is also an exclusive Target edition with two bonus tracks and HMV in the UK have what is presumably the same edition (with two bonus tracks). Finally, a ‘mystery’ super deluxe edition box set is listed on the US site, but not the EU one. Not that there are ANY details, anyway and no ability to pre-order (although you can sign-up to be notified). The US site also only lists coloured vinyl for the non-deluxe version.

To summarise, this campaign has so far been a bit of a shambles. A week of tedious teases on social media, ended up with a ‘reveal’ of the album name on Monday. But rather than then doing the sensible thing and announcing the album, the very next day (yesterday) the focus was suddenly on a double A-side single, that was going to be ‘released’. Before we could say ‘is it going to be available physically?’ the news cycle has now moved on to the album. However, MPL appear to think every snippet of information should be treated like a precious commodity, and are withholding details to a ludicrous extent. So there is no track listing, no information about why a deluxe 2LP coloured vinyl is £50, and nothing about how anything is going to be presented. Not really good enough. If you’re not ready with the details, then WAIT before announcing!!

Egypt Station will be released on 7 September, although given that they clearly haven’t worked out the content for it yet, there’s a fair chance that the super deluxe edition won’t meet that release deadline.