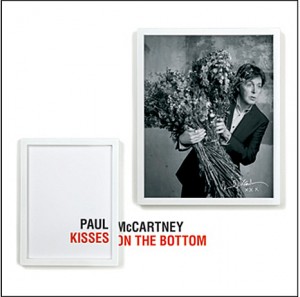 Paul McCartney has officially confirmed that his new standards album will be called Kisses On The Bottom, and not My Valentine as had been assumed.

As previously reported, the album is a collection of standards, as well as two new McCartney compositions My Valentine and Only Our Hearts. It’s produced by Tommy LiPuma, and features Diana Krall and her band, as well as guest appearances from Eric Clapton and Stevie Wonder.  Paul does not play any instrument on the record. Listen to My Valentine below:

Kisses On The Bottom

A deluxe version will be available, and will feature two bonus tracks, plus access to a download of an exclusive live show (available from Tuesday 14th February via paulmccartney.com), plus longer liner notes and expanded packaging featuring three postcards)

Track 15 from this deluxe edition looks to be a re-recording of the Wings song Baby’s Request, from 1979’s much maligned Back To The Egg album. See the video below to hear the original.

The album will released on the 6 Feb (7 Feb in the US) and will also be available digitally.

Although amazon.co.uk currently have the wrong release date, you can pre-order deluxe digipack (UK) here

or the standard album here

For those in the US pre-order deluxe version here

, or the standard version here

Amazon.com also have a VINYL version listed. Link to that is here