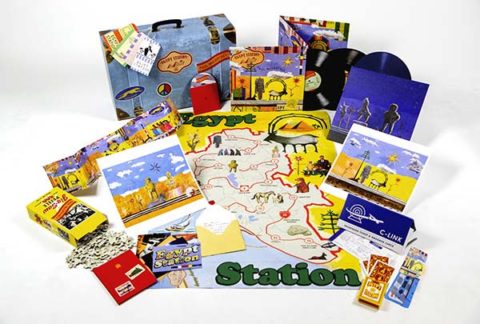 It’s strangely in keeping with its theme of travel and trains (at least for those of us in the UK) that Paul McCartney‘s Egypt Station box set arrives so late. The fact that a box set was in production was clear from day one, but details of this ‘traveller’s edition’ super deluxe have only just been announced and the set itself won’t be shipping until May, eight months after the album was released. Read on to find out the details of this limited set…

Perhaps aware that some were left disappointed with the level of availability of the Paul McCartney & Wings 1971-1973 box set, Paul’s team are at pains to inform fans that this new box will be ‘strictly limited’ and will have a one-time-only pressing of 3,000 units.

The box set – the Traveller’s Edition – is packaged in a vintage style suitcase and promises “previously unreleased tracks, hidden rarities” and more but as will become apparent it is one of those sets that ‘gathers’ bits together rather than presenting something entirely unique.

Here’s what is inside the box:

Here’s the other ‘stuff’ or what Paul’s team are calling ‘special features’:

This box set is being promoted as an ‘event’ and fans are being encouraged to sign up here by the end of today, and they’ll be emailed a unique link for access to the pre-order. This means it’s a D2C (direct-to-consumer) offering and won’t be available via normal retailers. The Traveller’s Edition box will ship on the 10 May 2019.

This release represents the ninth physical edition of Egypt Station. What do you think of it? Leave a comment on SDE.