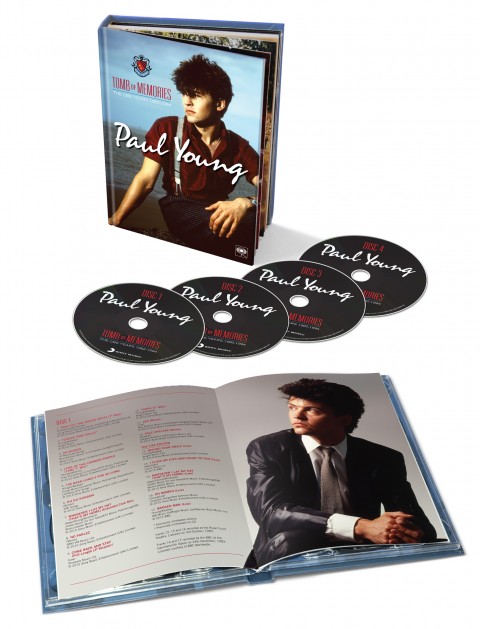 Sony Music has collaborated with SuperDeluxeEdition on Tomb of Memories: The CBS Years 1982-1994, a new Paul Young four-CD collection set for release in August.

Compiled by SDE Editor Paul Sinclair (with input from Young), this new collection spans Paul’s entire tenure with CBS/Sony and is awash with rarities, taking in many new-to-CD cuts, demos, previously unreleased alternate mixes of album tracks (and hit singles) along with unheard songs recorded during the sessions for The Secret of Association, Other Voices and The Crossing.

Highlights from this 64-track collection are numerous. They include the original seven-inch version of Paul’s first CBS single Iron Out The Rough Spots, a remarkable demo version of No Parlez album track Tender Trap, the 1982 seven-inch mix of Love of the Common People (which failed to chart!), the original 4.59 LP version of Come Back and Stay – which despite many issues of Paul’s debut, has never appeared on CD – and the inclusion of the five-track Japan-only live album The Live Edition. And all that’s just on the first disc!!

The second CD focuses on Paul Young’s 1985 album The Secret of Association (celebrating its 30th anniversary this year). This kicks off with Find One Voice, a song completed for the album but then dropped. Written by Anthony Moore (who penned No Parlez’s title track) Find One Voice is a funky, quirky delight that stylistically sits between the ‘anything goes’ fun of No Parlez and the more mature offerings of The Secret of Association. Amazingly, this was never selected as a B-side to any single and has remained in the archive unheard for over 30 years! In addition, this second disc offers previously unreleased alternate versions of hit singles Everything Must Change and Tomb of Memories, plus some rare B-side variations unique to the vinyl singles of that era (such as the early mix of evocative album track This Means Anything). Also included is the full length extended version of US number one Every Time You Go Away. 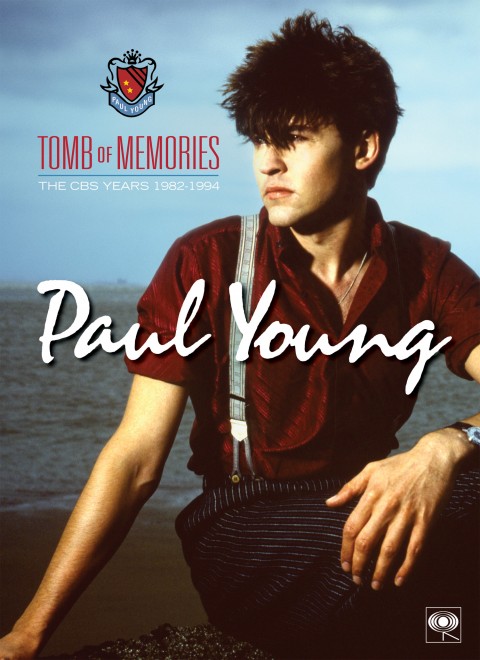 Tomb of Memories: Four CDs of hits and rarities

Between Two Fires (1986) and Other Voices (1990) saw Paul’s commercial fortune’s take a bit of a dip, although he still chalked up three top 30 UK hit singles during this period and delivered another US top ten hit with his fine Chi-Lites cover Oh Girl. That track is included on CD 3 (unreleased mix) along with alternate versions of the 45s Softly Whispering I Love You and How Does A Man Have to Be Strong. Another unheard song called Coralie – from the Other Voices sessions – ends disc three. Written again by Anthony Moore (Paul describes the song as “brilliant”), Coralie was mixed from the multi-track tapes especially for this collection.

1991 saw Paul Young back at the top of the UK charts with his best selling From Time to Time: The Singles Collection greatest hits set. Tomb of Memories: The CBS Years features an unreleased ‘solo’ version of the Crowded House cover Don’t Dream It’s Over(Paul Carrack sang on the original) and two fine collaborations: Senza Una Donna (Without a Woman), Paul’s popular duet with Zucchero, and Come On In, a track performed with Masayuki Suzuki and until now, exclusive to the Japanese version of From Time to Time.

The final long-player for CBS was 1993’s The Crossing. Ripe for rediscovery, this fine sophisticated pop album was mostly produced by Don Was and features the top 20 hit Now I Know What Made Otis Blue, which is included in this set along with a sprinkling of album tracks, an alternative mix of The Heart is a Lonely Hunter and a choice selection of some fine B-sides from this prolific period. A third and final unheard track is pulled from the archives for the last disc. Souls Unknown is a Steve Bolton composition (he wrote No Parlez highlight Ku Ku Kurama). According to Paul Young  the song was “the greatest fun to record” but was “a little too ‘out there’ for the record company!” That’s a bit of a shame because it’s an amazing track, if a little hard to describe – perhaps psychedelic heavy rock meets ‘Dragnet’ soundtrack..!

The CBS Years… finishes with some acoustic sessions recorded in 1994 at Abbey Road most of which found their way onto the CD singles of Paul’s last 45 for CBS Records, It Will Be You. Six tracks were recorded at that time, with five being issued. The acoustic rendition of The Crossing album track Love Has No Pride is released here for the first time. The ‘unplugged’ version of Paul’s 1983 number one Wherever I Lay My Hat (That’s My Home) is particularly splendid and completes the circle of The CBS Years by closing this four CD set. 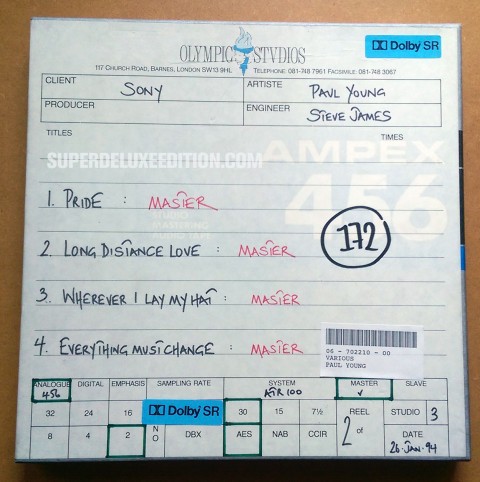 Music has been remastered from original tapes

All the music here has been remastered (carefully) from the original tapes with the exception of the extended versions of Every Time You Go Away and I’m Gonna Tear Your Playhouse Down which use the 2013 remasters that featured on the Remixes and Rarities set. As is probably apparent, this set has been created with the involvement and enthusiasm of Paul Young himself and he provides a foreword for the collection which is packaged as a ‘bookset’. Music writer Daryl Easlea contributes an essay on Paul’s career and achievements.

CD2 (The Secret of Association era)

CD4 (From Time to Time / The Crossing era)