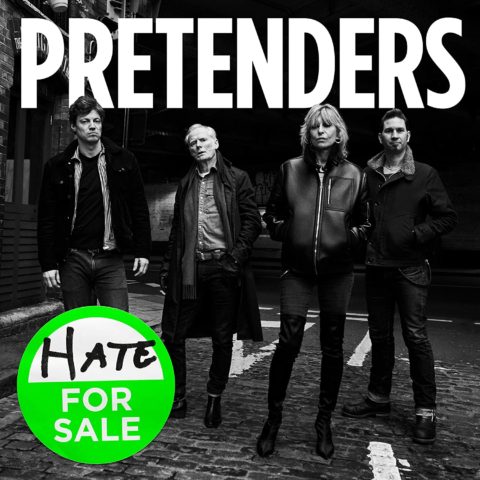 The Pretenders will release a new album, Hate For Sale, in May.

Their 11th studio album is produced by Stephen Street and sees Chrissie Hynde forge a songwriting partnership with guitarist James Walbourne, who with Kami Thompson (daugther of Richard and Linda Thompson) formed the band The Rails.

James has been guitarist for the Pretenders for a while and Chrissie Hynde had this to say about writing with him for the first time: “I wanted to write with him since day one. James is especially sought after and has recorded with Jerry Lee Lewis, Dave Gahan, and The Rails, to name but a few. We always planned on writing while on the road, but as anyone in a band will tell you, being on tour is a procrastinator’s dream come true”.

The Buzz from the new record embraces that classic Pretenders sound and is very promising. Hate For Sale is being released on CD and black vinyl and there are no box sets, deluxe editions or coloured vinyl (or similar). However there are bundles, T-shirts and posters at the official Pretenders store.

27 responses to Pretenders / Hate For Sale