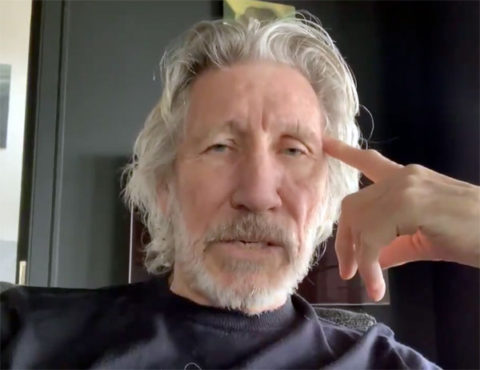 Waters starts the five-and-a-half minute video announcement by saying that he “rarely speaks to Pink Floyd fans [directly]” and adds “but that is what I am doing now.” He then thanks fans for the response to his recent version of ‘Mother’ – which he posted on Sunday – but goes on to question why the video isn’t available on the official Pink Floyd website.

Social distancing is a necessary evil in Covid world. Watching "Mother" reminds me just how irreplaceable the joy of being in a band is. pic.twitter.com/F4fxQCfbd6

In the video, Waters claims he is “banned” from the official Pink Floyd website by David Gilmour, and reveals that “about a year ago” he arranged a meeting with all surviving members of Pink Floyd at a hotel airport in London to help overcome what he calls an “impasse” but says that this “bore no fruit”.

The crux of Waters’ point is that the official Facebook page has nearly 30m followers and in his mind that is due to the body of work that the five contributors created (Syd Barrett, David Gilmour, Roger Waters, Richard Wright and Nick Mason). Therefore, he thinks it would be “fair and correct” that each member has “equal access” to the Pink Floyd audience to share and promote their projects.

In some final comments – which are unlikely to help thaw relations with Gilmour – Roger says “David thinks he owns it… he thinks he is Pink Floyd… and that I’m irrelevant”. He then can’t resist a little dig at Polly Samson’s ‘Theatre For Dreamers’ project, which has been heavily promoted via Pink Floyd channels. Polly is, of course, David Gilmour’s wife.

Roger Waters left Pink Floyd in 1985 and took the other members to court to attempt to stop them using the name. He lost the case and lost the rights to the Pink Floyd name. He later said he was wrong to sue them.

Watch Roger’s video announcement in full below. What are your views on this? Leave a comment.

An announcement from me. And when I mention the @pinkfloyd website, I also mean the Facebook page and all the rest. pic.twitter.com/x9T8CIAAMp